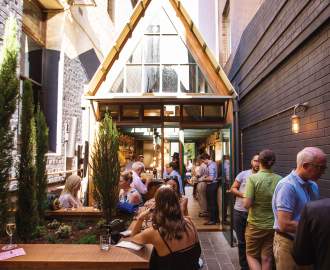 And into next week, too.

No one in Australia expects to feel cold in January. Summer is in full swing, after all. It's prime beach and pool season, obviously — and, even though the festive period is over and everyone is settling back into the year after the holidays, thoughts of lazing around by or splashing around in a body of water aren't ever too far from anyone's minds.

Whether you're fond of cooling down with a refreshing dip, or you prefer to escape to the vicinity of the nearest fan or air-conditioner, you might want to put those plans into action across the rest of this week. From today, Thursday, January 21, temperatures are expected to be mighty hot all around the nation, according to the Bureau of Meteorology's latest major cities forecast. As per BOM's city-specific forecasts, some of those temps are due to stick around a bit longer than that, too.

After an expected top of 27 degrees on Thursday, Sydneysiders can expect a few sweaty days, with temps staying at 30 or above from Friday until mid-next week. Still in NSW, Newcastle will hit 34 on Sunday, while Wollongong will get to 31. That isn't as warm as Canberra in the ACT, though — with the Australian capital forecast to hit 38 on Sunday and 39 on Monday.

Sunday and Monday will be warm in Melbourne, too, with tops of 35 and 37 forecast. They'll come after a 31-degree Thursday, then expected maximums of 26 and 27 on Friday and Saturday. Thankfully, a drop to 22 is forecast for Tuesday.

Brisbane will get to 27 on Thursday, 29 on Friday, and 30 from Saturday–Monday, and 33 on Tuesday and Wednesday — so it'll be warm, but also usual summer weather.

In Adelaide, the mercury will rise to 35 on Thursday, dip down to 32 on Friday, then soar to 39 on Saturday and a whopping 41 on Sunday. Also in the centre of the country, Alice Springs can expect its maximum temperature to stay between 35–39 degrees for four days from Thursday, while Darwin's will sit at 32-33 across the same period.

In Perth, it'll actually get a tad cooler over the weekend — starting with a 34-degree maximum on Thursday, then going up to 36 degrees on Friday, before dropping to 26 on Saturday and Sunday.

And down in Hobart, a top temperature of 27 is forecast for Sunday, with 30 expected on Monday — following other maximums of 22, 23 and 25 in the days prior.

Of course, while these are BOM's forecasts as issued at 6.05am on Thursday, January 21, conditions may change — so keep an eye on the Bureau's website for the most up-to-date information.

For latest weather forecasts, head to the Bureau of Meteorology website.