Plating Up: The Bespoke Tableware Inspired by Chefs

Chefs lend a hand in creating unique tablewares, fit for their food.

Plating Up: The Bespoke Tableware Inspired by Chefs

Chefs lend a hand in creating unique tablewares, fit for their food.

Melbourne's restaurant scene is vast and varied. But what do the Meatball and Wine Bar, Circa The Prince, Little Hunter, The Estelle, Izakaya Den and Jacques Reymond have in common? Their plates, that's what. Behind this homewares evolution is Glenn Tebble Homewares, from Unique Pottery, who create tableware and tailor-made designs for restaurants and chefs. Made from stoneware, each piece is designed and created right here in Melbourne and embraces the unique, ever-changing nature of the food scene.

Through his time working with chefs and restaurateurs, Glenn Tebble, the man behind Glenn Tebble Homewares, came to find that people were looking for items that just didn't exist yet. And so, their bespoke range was born. Together with chefs, Glenn designs and creates products on a need-by-need basis. Collaborating with some of Melbourne's best restaurants, Glenn tells us how some of these ideas came to fruition. "Long-time customers and all-round good blokes from The Estelle Scott Pickett and Ryan Flaherty have always been a good source of inspiration. With their history in Michelin star restaurants overseas, the boys were often coming to us with ideas, and not just from the design side of things. The boys suggested what we now call the splatter range.

"We developed a new colour option by using two kinds of glazes, whether it was a two toned colour or an abstract kind of finish. It opened a gateway for a whole new line of products — some of the glazes also present a textured look and feel." "The team at Meatball And Wine Bar were on the hunt for a specific bowl for their balls. As I had worked with their management team previously, they approached me. We designed what is currently our most popular bowl. It was made it to the specifications, and managed to streamline it with our existing larger bowl, creating a new range. As you can see, the gents at Meatballs are very happy with the result." "Some time back now, I approached Simon Denton, from Izakaya Den. Simon loved our range and went on to purchase a large quantity for his underground gem. Simon also liked our large sushi plate, but he also wanted one a little smaller. Again, I got the design team onto it and it was in his restaurant within six weeks. We must have made an impression, as when Denton launched his revamp of the old Verge site, now Numa Numa, he came to us for his bespoke noodle bowls." 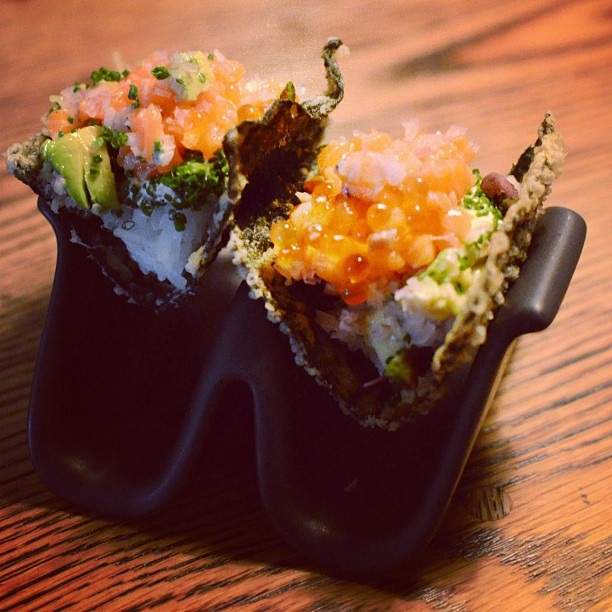 "Paul Wilson came to me with a plastic shaped taco holder that they had been using — just as the taco scene went crazy in Melbourne. He wanted something similar but a lot sexier! We made two versions, one that could hold two tacos and another that could hold four. The end result surpassed his expectations. We have since seen more chefs use their creative flair — with Guy Grossi using it as a panini holder and, thinking outside the square, other ideas have been for mini hotdogs, souvlakis and as a vessel for a cheese display." 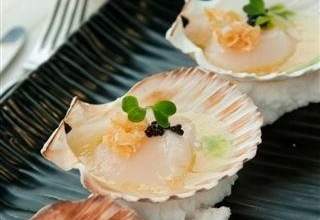 "Tony Twitchett from Taxi Dining Room in Melbourne loved our range, but at the time we had nothing that suited his needs. He required a large rippled square platter for his signature duck dish and their amazing sashimi. So, we put a conservative spin on his idea and we came up with one of the very few square plates that we have in our range.”