Featuring more than 100 pieces and installations, this gorgeous and sprawling showcase is well worth a trip to Brisbane's Gallery of Modern Art.

There's only one thing that's wrong with The Soul Trembles, the Chiharu Shiota exhibition that's now sprawling across the entire ground floor of Brisbane's Gallery of Modern Art until Monday, October 3: it isn't happening in Tokyo, at an art museum towering 53 levels above the busy streets, and against the inimitable backdrop that is the Japanese capital's twinkling skyline. That isn't a criticism of GOMA, its South Bank berth next to the Brisbane River, or the otherworldly display now gracing its halls and walls. But when this enchanting and entrancing Shiota showcase first debuted back in 2019, it did so in quite the striking Tokyo spot.

The background now differs, but the art itself remains just as impressive — and as eager to live up to the exhibition's name. Japan-born, Berlin-based artist Shiota crafts works that force everyone who sees them to take in their place in the world, all while musing on their own inner worlds in the process. Her art skews existential in both a big and an intimate sense. The macro and micro alike lingers piece by piece, and through The Soul Trembles as a whole. That's all there in the masses of string, the wall of miniatures and the detached body parts. It also dwells in the dangling suitcases and the compilation of window frames, and in the paper cascading upwards — aka the GOMA exhibition's major new commission. Indeed, when you peer at Shiota's mazes of inky-black wool, including when they're woven around chairs and pianos, it's impossible not to think about infinity, mortality, obliteration, the darkness that awaits us all, the fragility of life and the fact that all things eventually turn to ash. When you take in her labyrinths of blood-red yarn instead, it's equally difficult not to ponder the crimson stuff pumping through our veins, all that makes our bodies work and function, and the reality that being alive is so physically complex, emotionally tangled and tangibly fragile. Also inescapable: that, just as one exhibition after the next proves in any gallery's ongoing calendar, humanity's very existence is oh-so-fleeting.

Comprised of over 100 works from across 25 years of Shiota's career, and marking her largest exhibition to-date, The Soul Trembles is unsurprisingly a deeply gorgeous and wondrous showcase — and a deeply contemplative one. It's a ruminative artistic landscape to get lost in, and to think about who you really are and what you want out of life while you're standing within it.

For Brisbanites now eager to do exactly that — plus interstate art-lovers keen to make the trip north to see the Australian-exclusive exhibition — here are eight pieces to look out for. 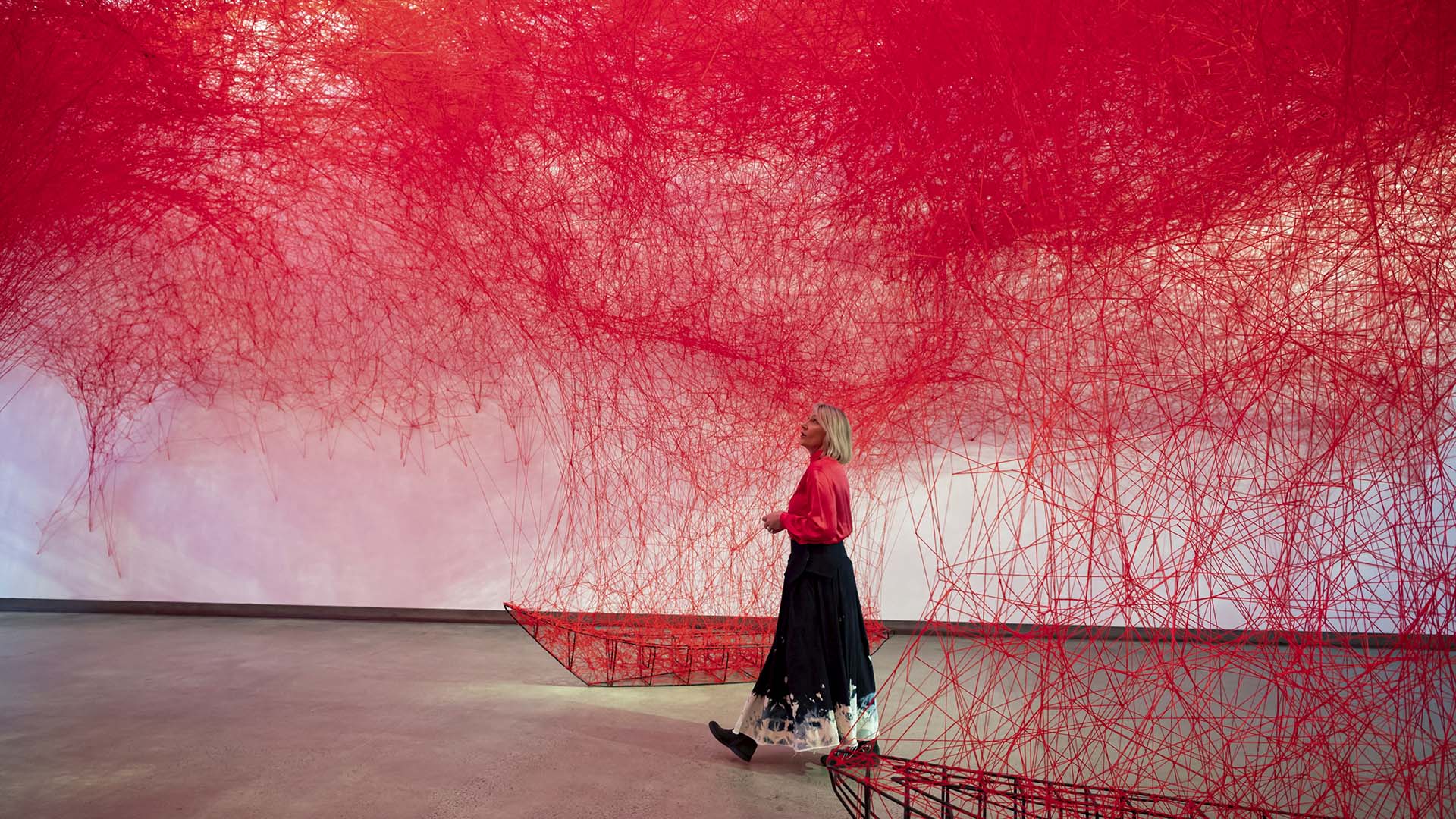 Every exhibition that settles into GOMA makes a splash in its main gallery hallway. The venue's presentations fill plenty of its other spaces, but the South Bank spot loves a bold entrance. When Patricia Piccinini: Curious Affection was on display, a Skywhale-like balloon did the honours. During David Lynch: Between Two Worlds, a mini cinema inside a cube sat in the foyer, offering attendees a complication of music clips from his movies. Yayoi Kusama: Life Is the Heart of a Rainbow boasted yellow polka-dotted orbs, while Water featured suspended rings that you could climb through.

At The Soul Trembles, Shiota's Uncertain Journey is no less spectacular — or memorable. Dating back to 2016, it features a series of metallic frames shaped like boats, all strung together by red thread. They're linked in a giant woven mass that spreads from wall to wall, making a wool canopy for a ceiling, and includes cavernous tunnels within the flame-hued strands. As far as welcoming you into Shiota's mindset, and making sure you're in the right headspace yourself, it's a perfect opening piece. Wanting to simply stand and stare comes with the territory. WHERE ARE WE GOING?

Much about The Soul Trembles deals in contrasts: life and death, big and small, red and black, and beginnings and endings. But this is also an exhibition about the here and now, as well as the journeys that life takes us on from one extreme to another. That idea is plain in many of the artwork names, such as the aforementioned Uncertain Journey and now Where Are We Going?. And, in both, it's evident in Shiota's frequent use of vessel-shaped structures — all either encased in or hanging via threads.

Dangling its wire boats from the ceiling, Where Are We Going? uses a monochrome colour scheme — letting the white wool of the ships' bodies clash with the black rope suspending them in mid-air. The installation sits just inside a doorway, but expect that passage to be clogged; just try not to stop immediately as soon as you lock eyes on the piece. That's a fitting reaction that speaks volumes about what strikes us in life, and where existence's bottlenecks reside. Still, thanks to its size and scale, you'll also want to take a minute to walk around Where Are We Going? as well. When Shiota was nine years old, the house next door to her home burned down. The following morning, a piano remained — scorched black, and drawing Shiota in with both its appearance and its quiet. In Silence responds to that event, and to the memory of it that still lingers. It muses on the things that tangibly remain, as well as those that haunt without a physical presence. It's also one of The Soul Trembles' most vivid sights.

Visitors to GOMA have to walk through a few rooms to get to In Silence, which dates back to 2008. In the process, you'll take in installations, photos, paintings and videos first. But when this piece appears, filling a room with black thread — and wrapping up a piano, as well as chairs ready for an invisible audience, within all those fibres — it's as arresting as the exhibition gets. While it screams with physicality, it's also a ghostly vision. And, among everything else, its interplay of light and shadows is ethereal. REFLECTION OF SPACE AND TIME

The Soul Trembles isn't focused on fashion, but it does feature two eye-catching dresses in one black cube. Like much within the exhibition, they're trapped within Shiota's beloved black yarn. A mirror also sits in the centre of the steel frame, dividing the space. Accordingly, as well as the items themselves, viewers also spy their reflections — and the setup is designed to make you merge the real and the illusory in your mind.

It isn't by accident that, with her ever-present threads, Shiota covers an object that's already designed as a covering. With her mirrors, she also muddies the lines between what exists to touch — not that GOMA visitors can — and what only exists to the eye. A piece about skins and illusions,  Reflection of Space and Time thinks big, as its name makes clear. It's a compact work compared to Shiota's installations, confined as it is to its cube, but it's also both stunning and weighty. 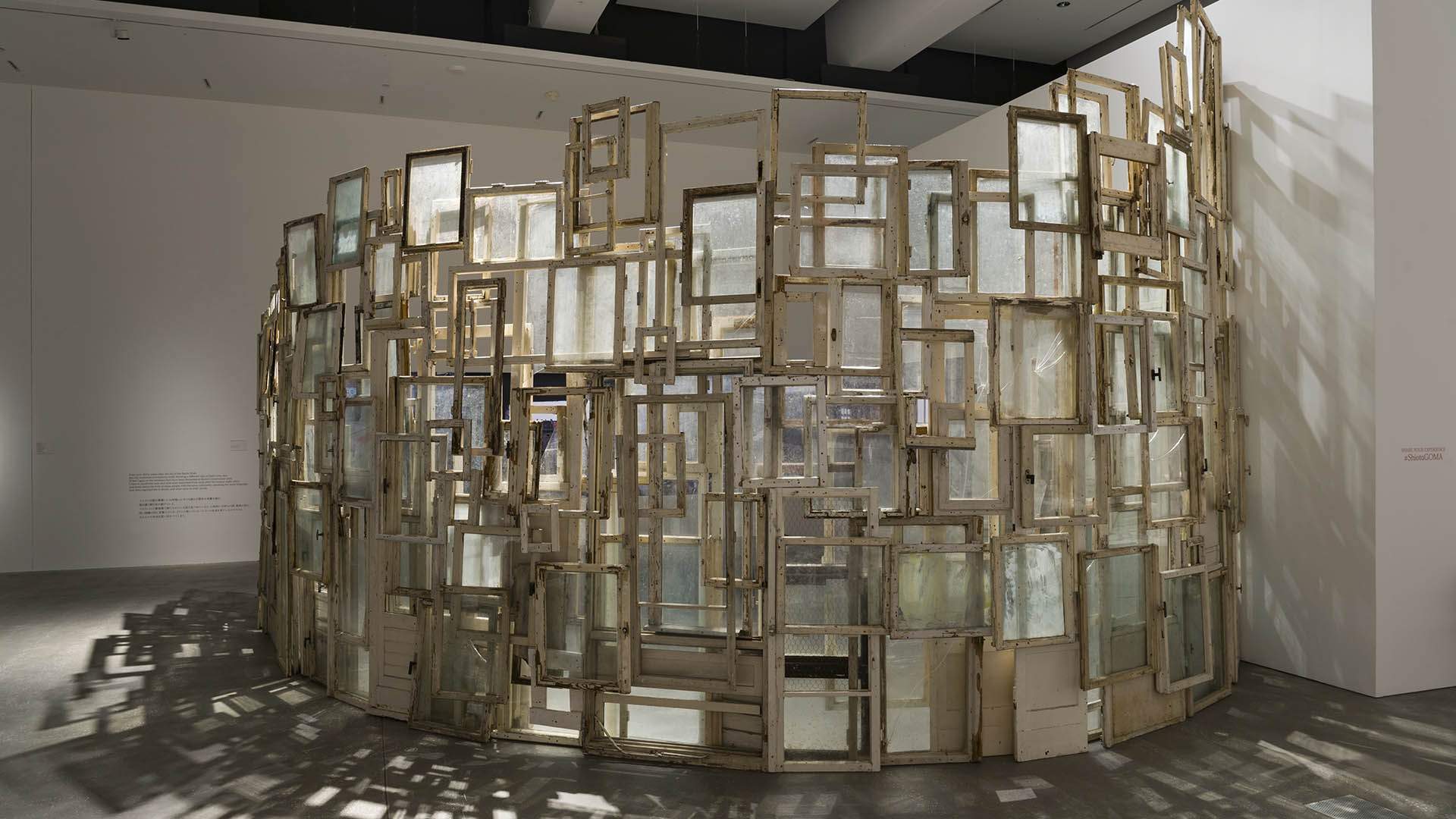 Eyes may be the windows to the soul — one that trembles, or not — but windows themselves are revelatory in Inside — Outside. This installation nods to Shiota's adopted home of Berlin, which she moved to in 1996. Attached together to form a barrier that fences off one corner, this piece takes inspiration from one of the German capital's most infamous structures: the Berlin Wall, obviously.

Shiota has crafted Inside — Outside out of discarded Berlin windows, in fact, all gathered from construction sites in the mid-2000s when the city was being redeveloped extensively. The structure sits adjacent to images of the city, with the combination sparking thoughts about separation, destruction and renewal, boundaries, and open and closed-off spaces. It's another work that makes gorgeous use of light, too. 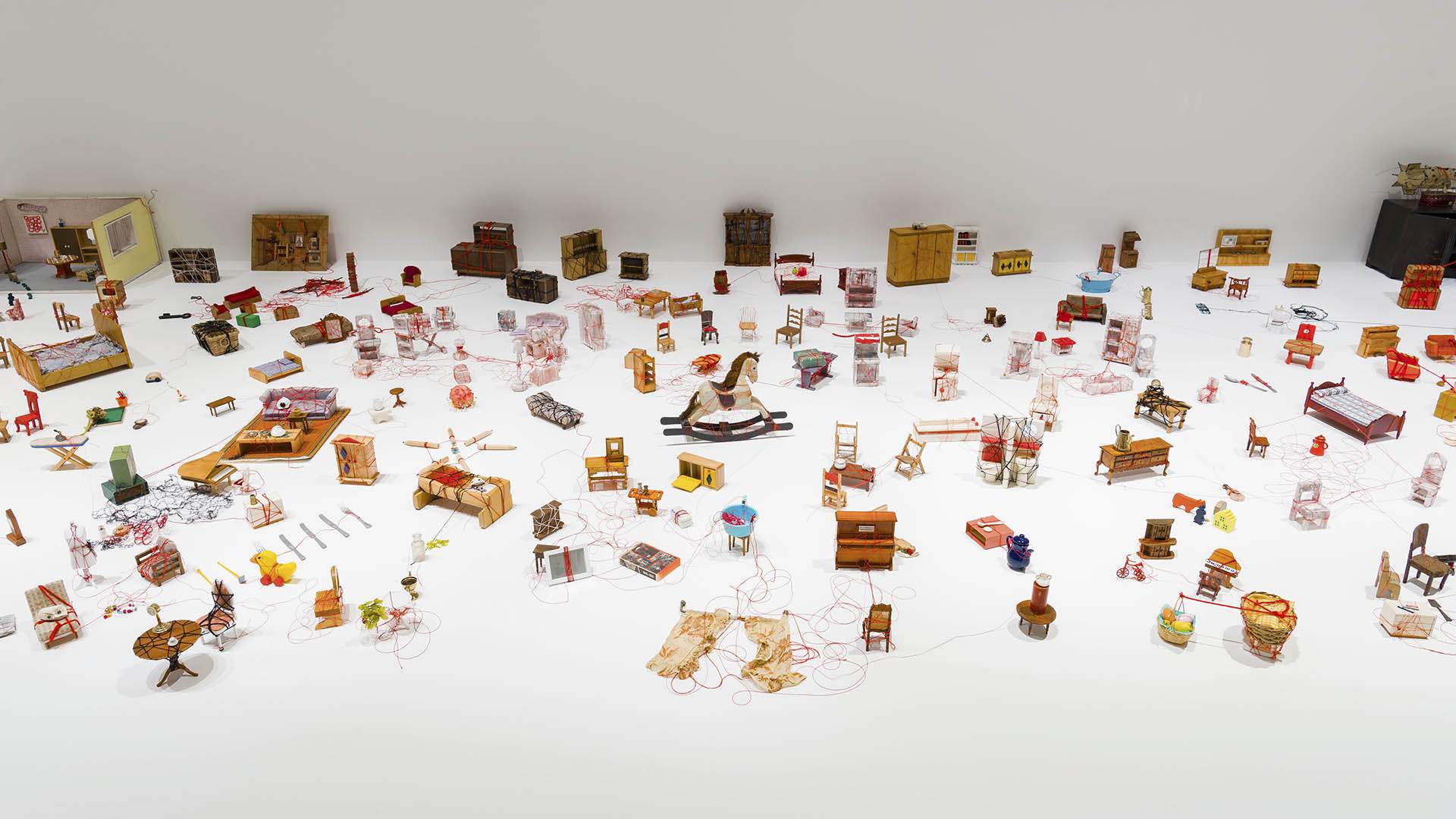 When wool stretches across vast hallways and fills rooms, The Soul Trembles is immense. It can be tiny, too, though. That said, the feeling that emanates when you see Connecting Small Memories and its array of miniatures is definitely voluminous. Big things can make an impact and leave an imprint, as plenty of Shiota's works do — and their minuscule counterparts can as well, including when arranged together along an entire wall.

It features items you won't see elsewhere in GOMA — ironing boards, rocking horses, tables, beds, chests of drawers, curtains, cupboards and more, all looking like something out of Honey I Shrunk the Kids — but Connecting Small Memories also resembles The Soul Trembles made pocket-sized. Red threads link its pieces, doing what the artwork's moniker promises. A QUESTION OF SPACE AND TIME

The Soul Trembles comes to Brisbane from Japan, where Shiota was born. It features a piece made about Berlin, where she has lived for decades. The exhibition also has a strong and vivid link to Australia, too, in the form of newly commissioned work A Question of Space and Time. Shiota spent part of the 90s Down Under, studying at the Canberra School of Art from 1993–94 and travelling — including visit Uluru, which this installation contemplates. Yes, string is once again a feature.

Strands of black rope hang from the ceiling, taking up an entire room. Within it, items of found furniture sit within the middle. A Question of Space and Time then tops that desk and chair with hundreds of suspended pieces of ordinary 80gsm paper, all leaping upwards like someone has just thrown an entire ream into the air. The result: a work that's mysterious and mesmerising, and another piece that's worth viewing from multiple angles. ACCUMULATION — SEARCHING FOR A DESTINATION

If you're a frequent GOMA attendee, you'll remember what once filled the gallery where Accumulation — Searching for a Destination now hangs. Over the summer of 2019–20, the room was piled with 100 tonnes of rocks, recreating an Icelandic stream. That Olafur Eliasson piece was phenomenal. So is the unrelated installation that now calls the same space home. They feel like mirror images: Accumulation slopes from left to right, affixed to the roof, where Riverbed reached right to left from the floor up. Experiencing both, even three years apart, is something special.

Accumulation suspends hundreds of suitcases on red thread, all jostling in the air. This isn't a new work, and it wasn't a response to the pandemic and the barriers to travel it sparked, but it's easy to muse on both while standing in front of it. This is another of The Soul Trembles' pieces about journeys, of course, and also about valuing minutiae. What is a suitcase if not a receptacle for all we see fit to keep with us when we venture away from home, and a physical item to which we attach our fondest travel memories?