Sing with Gaga, dance with MJ, give Monroe a kiss and have it out with the PM as Madame Tussauds' eerily lifelike statues arrive at Darling Harbour.

Flamin’ Hell, it's Ray Meagher, the first realistic thing to come out of Home & Away in years.

Here’s what I did last Tuesday: talked Die Hard 5 with Bruce Willis, kicked my feet up onto Obama’s desk, trapped Warney in a headlock, belted out a tune with Rihanna and then jumped up and down on Oprah’s couch. As for what I did with President Hu Jintao, he knows what happened, I know what happened – let’s leave it at that. “So”, you may well ask, “are these all just the insane ramblings of a troubled writer with delusions of grandeur?” Only half right (I’m not rambling), because thanks to Sydney’s new Madame Tussauds, all of the above is now possible.

Since its first permanent exhibition opened in London in 1835, Madame Tussauds has delighted audiences around the world with its hyper-realistic wax statutes of famous figures both past and present. Each statue takes around 800 hours to complete, including the taking of over 250 precise measurements just for the face and more than five weeks spent inserting individual strands of hair into the head. It’s gruelling and meticulous work but the results are absolutely astounding: standing before these models – you truly feels as though you’re in the presence of celebrity.

Cleverly divided into themed rooms such as historical, political, musical, sporting and cinematic, the exhibits are highly interactive and a hands-on approach is strongly encouraged by staff. Beyond the inevitable international A-Listers there’s also a distinctly local flavour to the 70 or so exhibits, with the Minogue sisters, Don Bradman, Ned Kelly and a hauntingly lifelike Heath Ledger all in attendance. Even Madame Tussaud herself makes an appearance, featuring hair so extraordinary it beggars belief for anything short of Gary Oldman’s wig in Bram Stoker’s Dracula.

While there are many reasons to head along and check out the exhibition it’s ultimately curiosity that drives the experience. There’s something undeniably tempting about the opportunity to compare your own height (and perhaps weight) to those of the famous folk, as well as the more surreal experience of eyeballing each and every one of them and imagining what it might be like to engage them in conversation. Or yell at them. Or get down on one knee and propose (FYI - Marilyn didn’t say “yes”, but she didn’t say “no” either…). Layne Beachley showcasing the unique talent of surfing on a board made out of the same material she is. 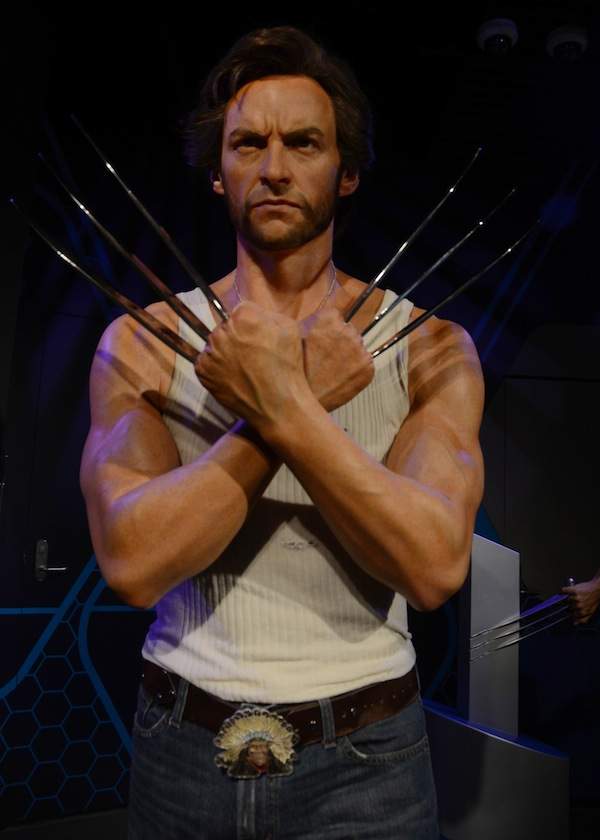 Hey, Hugh Jackman, on an Adamantium Claw Scale of “Terrible” to “Appallingly Bad”, how many claws do you give Wolverine? Captain James Cook wondering whose iPhone just went off, as well as “what the hell’s an iPhone!?” In a fascinating twist, it turns out the real Brad and Ange modelled themselves on wax mannequins.