For when you need to get a bit more culture in your life.

Being 'cultured' and visiting art galleries feels like one of those fancy adult activities you do on those rare weekends when you're not laying in bed binge watching Netflix, but in reality, accessing art doesn't have to be difficult nor expensive. Sydney is teeming with incredible installations, public paintings and sculptures craftily hidden away in side streets, tucked into alleyways and suspended above our heads — you just need to make the time to seek them out. There's plenty of places to eat and drink along the way, too. So set aside a day — or maybe a couple of cheeky long lunch breaks — and discover some of the hidden art this city has to offer. Let's walk. Armed with a Mecca coffee from their shop on King Street, begin your art pilgrimage by strolling to Angel Place, where if you look up, you'll spot a canopy of bird cages that make up Michael Thomas Hill's aerial work, Forgotten Songs. This installation commemorates the fifty unique bird songs that could once be heard echoing through central Sydney before they were slowly forced out as a result of European settlement. Spend a moment, reflecting on how this bustling lane filled with restaurants and busy commuters was once home to a multitude of bird species that are now formally extinct or threatened with extinction. The Grounds of the City — 500 George Street

If thinking about birds makes you peckish, continue up George Street to The Grounds of the City for some grade A breakfast treats — don't be put off by the lines, it's worth the (sometimes) lengthy wait for the coffee alone. This sibling of the OG Grounds in Alexandria is a 1920s style coffee house complete with old timey shoe shines and a coffee sommelier. So, if you've got a hankering for getting arty and documenting your food, rest assured; this place is an Instagrammer's dream. After your hot injection of avo smash, mosey up to Jason Wing's In Between Two Worlds which spans across Factory Street, Hay Street and Kimber Lane in Haymarket. The beguiling work references both Indigenous and Chinese motifs for wind, water, fire and earth, which are believed to each have their own spirits. By day, you'll spot the cloud murals painted on the floor and silver otherworldly figures suspended in the sky. Be sure to return in the evening — perhaps en route to a Chinatown dumpling feast — and witness those once silvery figures glowing blue in all their neon glory. Pass through the Eveleigh rail yards, and stop by Henry Lees for lunch. Reminiscent of the sort of space you picture when you imagine what your 'adult house' will look like, Henry Lees prides itself on serving up sustainable produce in innovative ways and supporting the local creative community. Which means there is now more than one reason to feel good about ordering a second serving of their signature braised beef cheeks. United We Stand, Divided We Fail the Future by Bronwyn Bancroft and Dale Jones-Evans, Hugo and Vine Street Reserve

Roll your post lunch body down the hill into the heart of Redfern, making sure to pass by Bronwyn Bancroft and Dale Jones-Evans collaborative mural, United We Stand, Divided We Fail The Future. Honouring the spirits of the land that protect the people, this large scale work was created with input from the community, including the local children who helped paint the spirits depicted. Continue past Redfern station, across the block and spend some time in the sun admiring the renowned, Welcome to Redfern mural by Reko Rennie. Answering the community's call for a spot where young locals and artists could go to create, Welcome to Redfern was developed by Rennie and a group of local young Aboriginal artists. The artists held workshops to help nurture the young talents, and in turn, have them participate in creating a public work. The piece envelopes an entire terrace house in the heart of the suburb, and has become an important landmark representing Aboriginal art, culture, history and community. 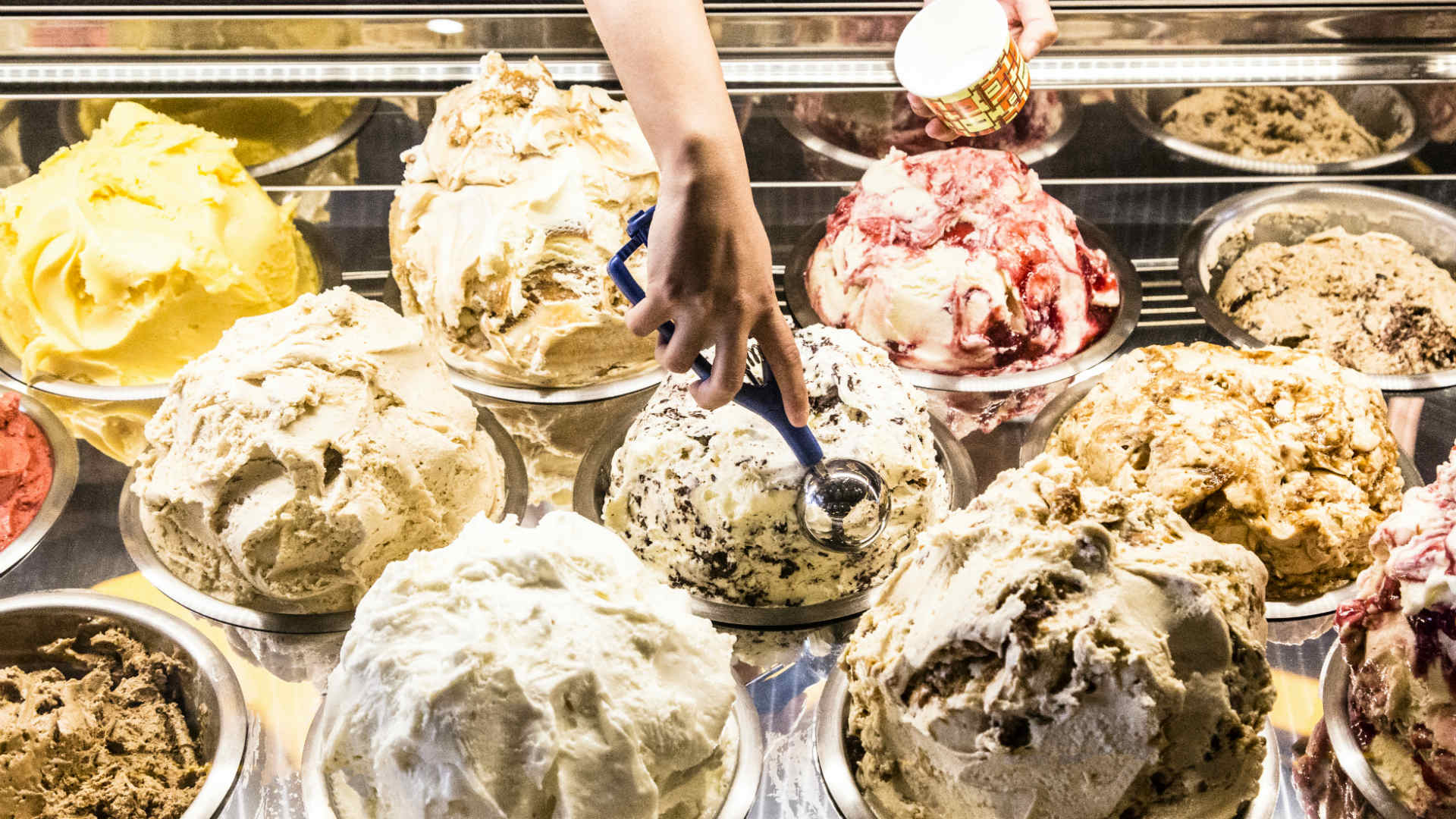 Start your evening tour at Gelato Messina. Here, grab some of the cold stuff to go with a double scoop of whatever fanciful flavour has made their blackboard list that week. WE ARE HERE by Dylan Demarchi, The Dirt, Gui Andrade and Sarah Howell, Foley Street

When you hit Oxford Street, gaze upwards at the incredible 15 by 75-metre mural, WE ARE HERE, running along the facade of Foley Street. The work is the product of the artist dream team, Dylan Demarchi, The Dirt, Gui Andrade and Sarah Howell, and explores the colourful history of the area; how it evolved from a humble bush track-to-path for anti-war protests to a cosmopolitan boulevard and the route for Sydney's Mardi Gras parade. The impressive work spans a number of mediums — including paste ups, stencils, paint and photography — to visually represent the binaries and polarities that characterise the area, contrasting the dark and violent history with the now amazingly colourful community. Turn off Bourke Street, onto Mary Place, and you'll be confronted by Mikala Dwyer's somber work, Lamp for Mary. The large lamp spills pink light onto the street below, which serves to create a safe passage for the community, as well as memorialise victims of domestic violence. Be sure to spend a few introspective moments reading the powerful text on the nearby wall: "This is a lane with a name and a lamp in memory of the woman who survived being beaten and raped here. She happened to be a lesbian. When the sun sets this lamp keeps vigil along with you who read this in silent meditation." As the sun sets, check out S(w)ing in the East Sydney Community and Arts Centre, a new work by Turpin and Crawford Studio. The installation is comprised of three huge illuminated disks that swing like a pendulum. Controlled by strings, the undulating disks can be made to, well, swing by passers pulling below. It's kind of like ringing church bells, if you're keen to get your Quasimodo on. Swing back up to Oxford Street and pop into Big Poppa's for a glass of Italian wine and their ultra creamy burrata served with heirloom tomatoes, toasted farro and smoked salt. Stay for a few hip hop beats, and once you've had you're fill, head back out and up Oxford Street towards Taylor Square for the last stop of your tour. Always was always will be by Reko Rennie, Taylor Square

Finish your art tour by reflecting on Reko Rennie's unmissable work, Always was always will be, a bold technicolour mural which became an instant icon. An eclectic mix of contemporary imagery and traditional techniques, the work highlights the contrast between the artist's connections to north-western NSW and the traditional markings of the Kamilaroi people. The building at 1-5 Flinders Street used to be a unmemorable shade of blue, but is now remarkable with fluorescent pink, black and blue patterns. Elevating the heritage building to landmark status, the neon text that proudly sits across the building's facade reads, "Always was, always will be", reminding commuters, clubbers, passersby and tourists that this was Gadigal country and always will be Gadigal country.

Follow our walking art tour, or create your own using the City of Sydney's Culture Walks app, featuring curated art and history walks to help you explore the city even more.

Published on September 26, 2017 by Kara Jensen-Mackinnon