The Rise of Real Jerky

Salmon, pickleburger, Srirachuan. This isn't the jerky you know from the truck stop.

A preservative-laden candy made with rubbish meat and flavours that read like weather reports. That was the old style of jerky, and Darrell Beveridge, father of the Darling Jerky Co, says it's met its end. He's one of the new breed of dried meat revolutionaries, wrenching jerky away from its image as a cheap convenience store snack.

“The old world of jerky doesn't understand," he says. "For them it was something eaten by real rough truck drivers from the service station.”

Another comrade-in-arms, Brent Griffin of Griffin Jerky, has a nostalgic connection to jerky from his youth. "It was something we'd all do and feel bad about it,” he says. "I started making my own because a lot of that stuff is garbage.” He tells me this while we gnaw away on a stick of his own product, which I've just bought from behind the bar of Sydney's Arcadia Liquors, the kind of bar that's the 'service station' of new-wave, natural, handcrafted and excitingly flavoured jerky.

Both Darrell and Brent want to bring their meat to Sydney's jerky virgins. One part of that is making a product that doesn’t ‘feel’ like jerky, the other part is simply making a bloody good product. First rule: “It has to be pasture-raised, roaming free range cattle”.

Here's how to judge.

Appearance: Every piece should look different he says, “If something looks like a Roll-Up, it's probably processed. It should look like a piece of meat shrunken down.”

Texture: "You want it to almost chew like a steak. You want it to bend but not break.” It shouldn’t tear like crepe paper, having to fight a little to tear it apart is normal. If you need to gnaw for several minutes just to get a bite sized chunk, it’s too dry or too old.

Taste: A good stick of jerky should have three stages of flavour. There’s the initial flavour Darrell calls the seasoning or bite that should come without any chewing. Next is the follow-through, a juicy release of flavour as the jerky softens. Last is the aftertaste. "It’s not like a chip," Darrell says; you should be able to savour it. A NEW WORLD OF FLAVOUR

Darrell said when he first started making jerky at home five years ago, all the old companies were selling the same thing. “Flavour wise there was really a lot of boring flavours. It was really just original and hot," he says. "Pepper was the big spice. There was a lot of room to try different types.”

Now Darrell’s making a 'pickleburger' flavour, which is as complex and layered as it is accurately burgery. He’s also experimenting with flavours like mee goreng, tobacco and ghost chilli.

Brent’s main line includes chipotle adobo and a rich 'Srirachuan' (sriracha + Szechuan) flavour. In October he did a collaboration with Young Henrys where he made a real ale and toasted coriander seed batch. Another collaboration with Kakawa ended up with chocolate coated jerky. “The idea is grosser than what it’s like," he says. "It sold out really quick.” Now he’s working on a vegetarian variety. I asked him about it but it’s top secret until he nuts it out. 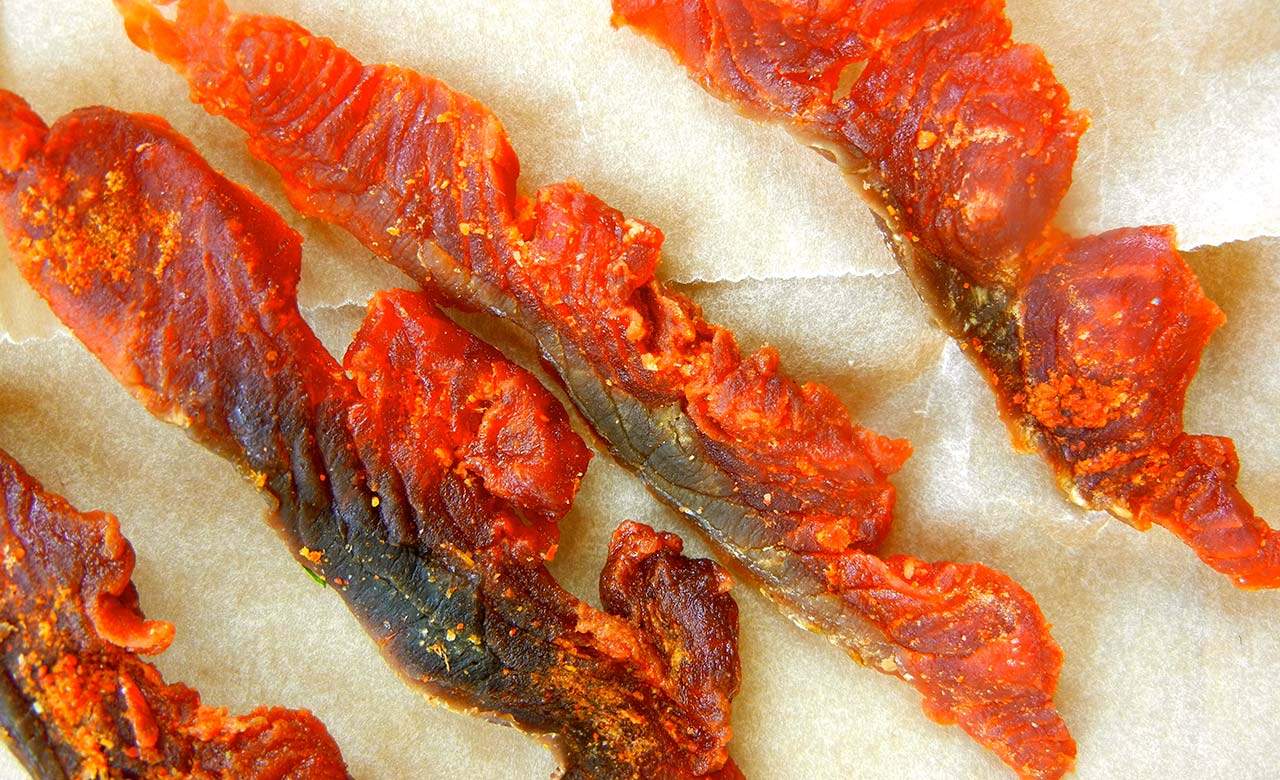 BAKKWA, MOO DAD DEAW AND OTHER KINDS OF JERKY TO TRY

Currently they’re both exclusively using pasture-raised grass fed beef but having tried and enjoyed jerkies from Thailand, China and South Africa, I asked Brent and Darrell whether they have any plans to make other varieties of jerky with different meat. Brent told me he’s experimented with pork and lamb, but nothing’s been put into production. Darrell, on the other hand, is too focused on perfection for any diversification.

I decided to explore Sydney to see what else I could find. That’s how I met Jack Zhang. Jack’s the everything behind Singapore Famous BBQ Pork, a time-displaced storefront in Sydney's Chinatown. It would be barely noticeable besides the fact that it hasn’t changed in over 25 years. Jack started there as a jerky apprentice some two decades ago. Now the master makes fresh bakkwa and Singaporean-style jerky. Bakkwa is a sweeter and softer variety of preserved meat that’s air dried and then grilled over a charcoals. Jack dries and grills his bakkwa daily, but that's pretty much all he would tell me about what goes into the process (he thinks others might copy his business model).

Then there's moo dad deaw, a Thai-style sun-dried pork. Chinatown's Do Dee Paidang make it in house along with a similar beef style. Unfortunately they’re not allowed to sun-dry it traditionally because some bureaucratic food prudes might complain, but that doesn’t stop it from having a delicious smack of spice.

Often confused for jerky is biltong, which Stanley Street Butchery has been making since 1974. Biltong, unlike Jerky is cured in vinegar for several hours before being dried. Stanley Street serve theirs traditionally — fresher, fattier and thicker, all the better. Meanwhile, in good news for pescetarians, new Enmore bar The Gretz is doing a rotating menu of house-made jerky, starting with salmon.

In Brisbane, your jerky go-to is Gypsies Wagon, who are known for their legendary Argentinian gaucho jerky. In Melbourne, head up to the bar at fancy Vue de Monde for ocean trout jerky (dine in the restaurant and you'll be treated to emu). For more down-to-earth jerky, there's the Meatball and Wine Bar's $9.50 Wagyu beef servings, which come in flavours such as Samboy (salt and vinegar) and Ninja (teriyaki). BACK TO THE REVOLUTION

Despite eating enough jerky to devolve my throat into a desiccated husk, I found myself thinking back to Darrell and Brent’s revolution. How strange the two of them started at almost the same time with such similar ideas.

"It's funny that we wound up both doing the same thing," Darrell says. "I mentioned it to a friend and she called it the great jerk off of 2014." You'd think they'd be fierce competitors, but they're not; they both just love jerky too much. "The longer both of us exist the better."