There's art everywhere, and Concrete Playground's sifted out the best parts of Art & About for you to get to.

There's art everywhere, and Concrete Playground's sifted out the best parts of Art & About for you to get to.

Public art festival Art & About is usually laid out across town in order, not unlike stations of the cross. You follow its trail from one neat alleyway to the next, watching the best of local and overseas art laid out in an orderly fashion from the CBD down to the harbour's edge. This year's festival, though, is spread out more like a series of quiet hollows, tempting you to slow down and notice nooks and crannies of the CBD you hadn't chanced to chance upon before.

With so many things on, and with so much of the city covered in newly applied art, it can be a little intimidating working out which work to check out, and in what order to do it. To help you, Concrete Playground has put together this list of the ten best things to start with as you go about checking out this year's offerings at Sydney's best spring festival of creativity. To be an alley you need to be a narrow street surrounded by buildings, but to be a lane just narrow will do. There's no specific word for a narrow space packed with weather-proof art, but Sydney may need one soon. With today's internet all about bringing a mix of curation and serendipity to the cascade of interesting stuff in life, Laneway Art takes this same aesthetic to the streets, gathering art from around Sydney and beyond, compressing it into an angular mix of narrow streets.

This year's selection includes a whole staircase covered in the guerrilla knitting from the 'mother' of yarn-bombing, Magda Sayeg, urban periscopes with mirrors that look further across the city than you'd imagine and a series of mobile film screenings descending on a series of Sydney streets Thursday nights, using the side of a rickshaw as its screen. Michael Landy's latest artwork is a puzzle. Behind the cenotaph in Martin Place, Landy has laid out a giant map of Sydney's CBD, seemingly hand drawn on a giant white jigsaw. Each piece owns a counterpart somewhere around the city that has a story stuck onto it. The stories are about moments where kindness barged itself small or large into sombody's life. Most of the stories happened where the pieces sit, so you have the choice of replicating them in a chain of life imitating art, borrowing from life.

Landy spent months recceing his urban canvas by collecting stories from Sydney to fix to the pieces. He'd taken the same approach to London's Underground, joining Tube art like the antiquities plastered on Holbourn Station and mosiacs by Sir Eduardo Paolozzi.  His approach is as crowd-sourced as Wikipedia's editing system, but with his last dramatic step from abstract geocoordinates to tangible places, he steps from the aesthetic into a connection with a city you'd thought you already known.

Where: Martin Place and Sydney's streets. Dominating Hyde Park's Central Walkway like a series of errant movie-screens strung through the foliage, the canvases of Sydney Life take a high-contrast lens to the ins and outs of the city. Each glossy image tells a story of the city, filtered by the lens of one of the 22 finalists' piercing eye for detail. Fluttering ethereally in mid-air, their choices give you an unreal window onto the everyday. Julie Sundberg found hat headed TAFE students, Peter Morgan captured cabbies dining streetlit out of the back of a cab and John Fryz posed a life-size gnome. These are pictures of the everyday, but caught at rare moments. The circular  rotunda of Sandrigham Gardens is a royal memorial dating to the fifties, and hosts Sydney Life's younger counterpart Little Sydney Lives. The younger photographers have competed in two categories, their ages ranging from 3-11. The pictures they've taken are often as good or better than their adult counterparts. What they lack in complex post processing and well-chosen captions, they make up with the starkness of their images and the way their clear focus brings their subjects front and centre. Where adults find the clarity of a moment, children find focus in simple things themselves. 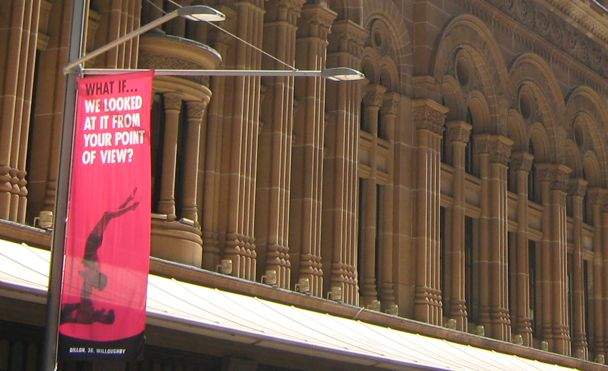 When Sydney's street banners first went in they seemed very plush and high-rent. And while they're still very trim, familiarity seems to breed forgetfulness. What If? brings a sense ownership back for the banners, having sought out bon mots from across Sydney to fill the banners with ideas, suggestions and meditation. Anyone was able to get their ideas up there, with the threaded mottos artfully assembled by talented designer Suzanne Boccalatte. Getting concrete-walking pedestrians' words up into the first floor gives a good sense of writing it big across the storied streetscape in crayon. The banners are spread out across the CBD, so to get a look at this outdoor gallery the main thing to do in most places is look skyward. The Sydney Festival has its now annual Spiegeltent in the corner of Hyde Park. Heidi Dokulil and Liane Rossler took inspiration from the Pacific to compete with it in the same location by raising the roof of the Happy Talk House. The house itself is sustainable, recycled and recyclable and decorated by Cook Island artistry, but its main appeal lies in the workshops to be hosted inside it. Throughout September and October, the hut will be hosting a knot of workshops on age old crafts — like weaving or bookmaking — where you can make yourself something brand new.

Attendance takes careful attention to their calendar, but between organised moments you can drop in to their materials draped long-table to put together a something of your own design. If the feeling of making things in the deft mesh of your own two hands is what takes you to your happy place, Happy Talk is for you. Back in 2008, Sarah Barns helped the ABC put together a tour of the Sydney that was called Sidetracks using the then cutting-edge technology of putting a tour on your mobile phone. Though phone technology has moved on somewhat, Barns has returned to offer another glimpse into the city's earlier lives. Unguarded Moments takes old images and returns them to Miller's Point and Walsh Bay, with a string of projectors around the area shooting original photos up onto the walls of the neighbourhood they were once taken in. And if you find the faces of the past grabbing you, you can look up their stories online as you walk around with your now ubiquitous, modern smartphone.

Where: Around Miller's Point and Walsh Bay (Map). Gallery, meeting place and occasional bakery, Contested Landscapes brings ideas from the world of art and science together under its canvas. Setting itself up as a walk-in space in front of the Customs House Library, it's flush with paintings on the walls, plush furniture and visiting speakers eager to get their ideas on art and environment out to the public. For the week of September 26 through 29 the series will walk you through topics like Urban Sydney and Food Security.

Where: Customs House Forecourt, Circular Quay (Painting: A View of the Artist's Garden by Leo Robba). A sideline to the Laneway Art program, Streetware is mostly centred around the old Mark Foys building off Hyde Park. The show is in its second year of getting emerging street artists to put their work on walls, operating under legal detente with the City's governing authorities. Wandering around alleys south of Hyde Park you find yourself twisting around right-angles covered in fresh paint and new stencils. Penelope Cain's Cubicle Farm posters urban wildlife in its natural environment, while Beastman's nearby organic mosaic style will be familiar to most Sydneysiders, even if they weren't able to put a name to it before. The art is well slotted into the minutae of South Sydney's laneways, so if you're not working off Art & About's iPhone-sized app you might want to print out a map to help you navigate its nooks and crannies.

Sheltering under the umbrella of Art & About's 'associated events', Primavera's calendar overlapping the festival's gives you the unique opportunity to explore Art & About, Primavera and the Rocks Pop-Up Project all in the one epic, foot-wearying afternoon. With the MCA in the throes of renovation, it's put its annual spring show out on the Rocks' stone streets. With this last station of the journey, for one strange month there really is art all over the streets on Sydney.

Where: The Rocks (Images: Brown Council and Tom O'Hern).