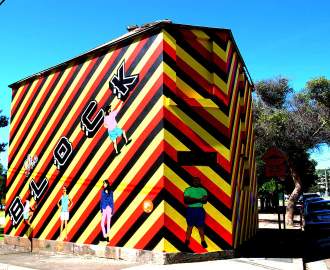 The Best Rooftop Bars in Sydney

For the ultimate sundowners.

The Best Rooftop Bars in Sydney

For the ultimate sundowners.

Sydney doesn't have a huge number of rooftop bars, but the ones we do have are something to be glad about. When the days and the nights get hotter, a hard-earned thirst is best quenched in the great outdoors, preferably on a roof, pretending that commuters on the streets below are tiny ants.

We've put together a list of bars and pubs that have put their rooftop real estate to good use. There are old faces, newcomers and places that we might have forgotten — read on, and take your drinks to the sky. 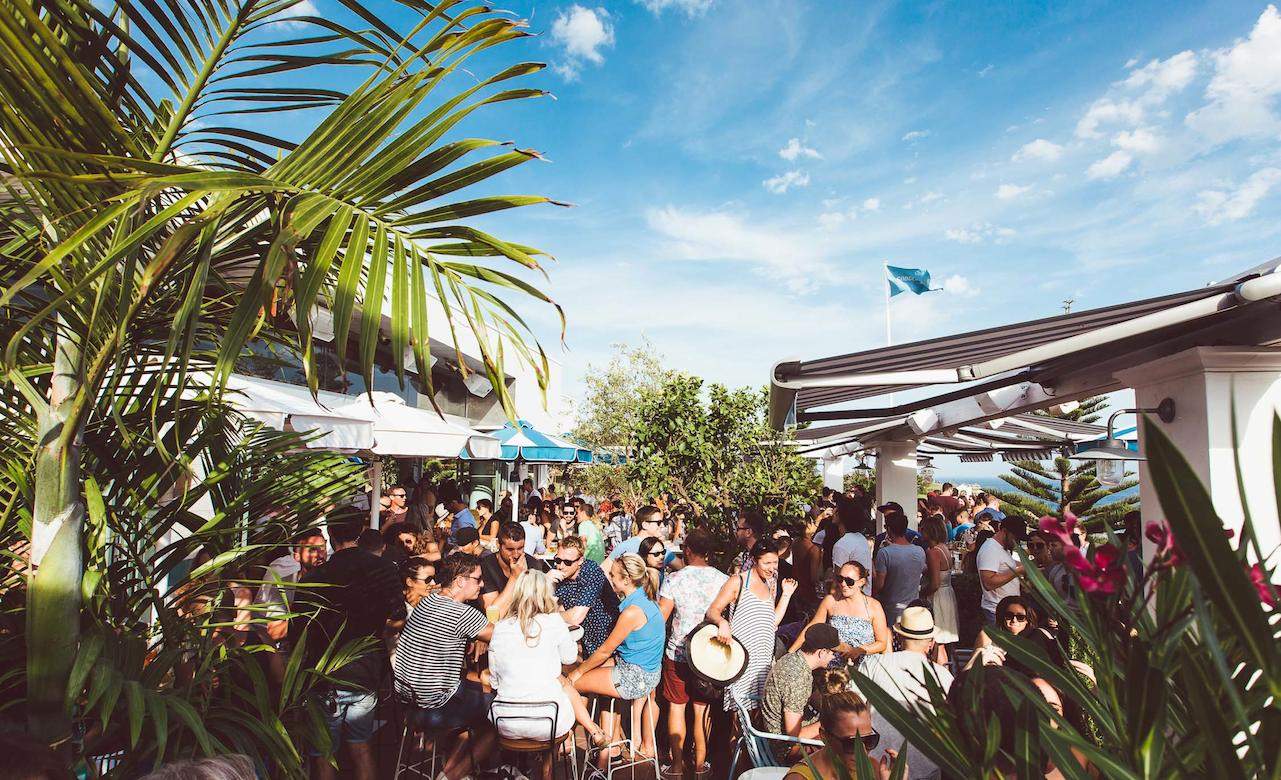 With a perimeter balcony overlooking spectacular beachside views, the rooftop at the Coogee Pavilion marks a new height in sophistication from the Merivale clan. No expense was spared in this elaborate reinvention of the former Beach Palace Hotel site. For the design concept, Justin Hemmes and his team drew inspiration from a fictional character they created, an eccentric botanist called 'Wylie' who entertained on his private rooftop conservatory. The story is brought to life with lush overflowing greenery, sketches of exotic birds and indoor greenhouse structures. 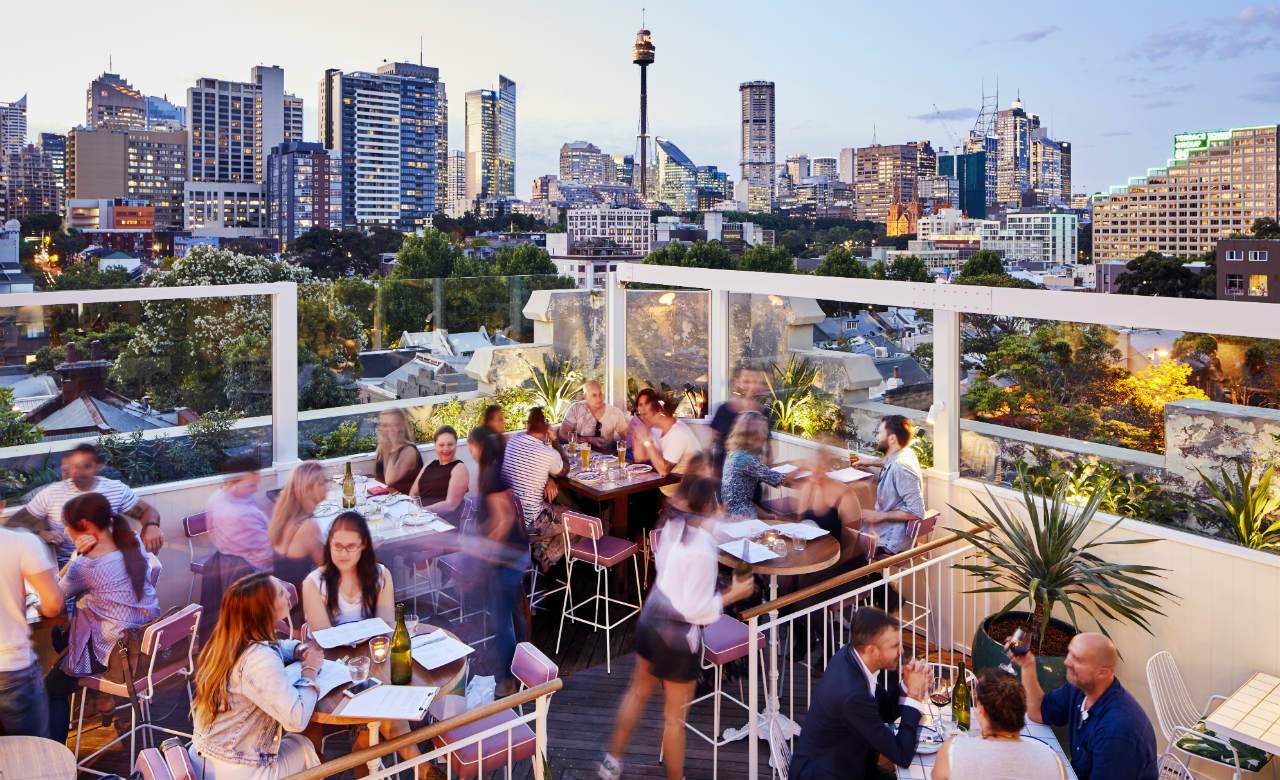 One of the newest rooftops to be added to the Sydney's skyline is at the refurbished East Village Hotel. The Terrace is where you want to be on a warm night — surrounded by a veritable cornucopia of ferns and flowers, and simple, white furniture smattered around the place helps to instil the feeling of watching the sun set from a beachfront bar on the Mediterranean coast, or escaping to Mexico for a few moments. It's bright, breezy and welcoming — perfect for any upcoming summer shindigs. 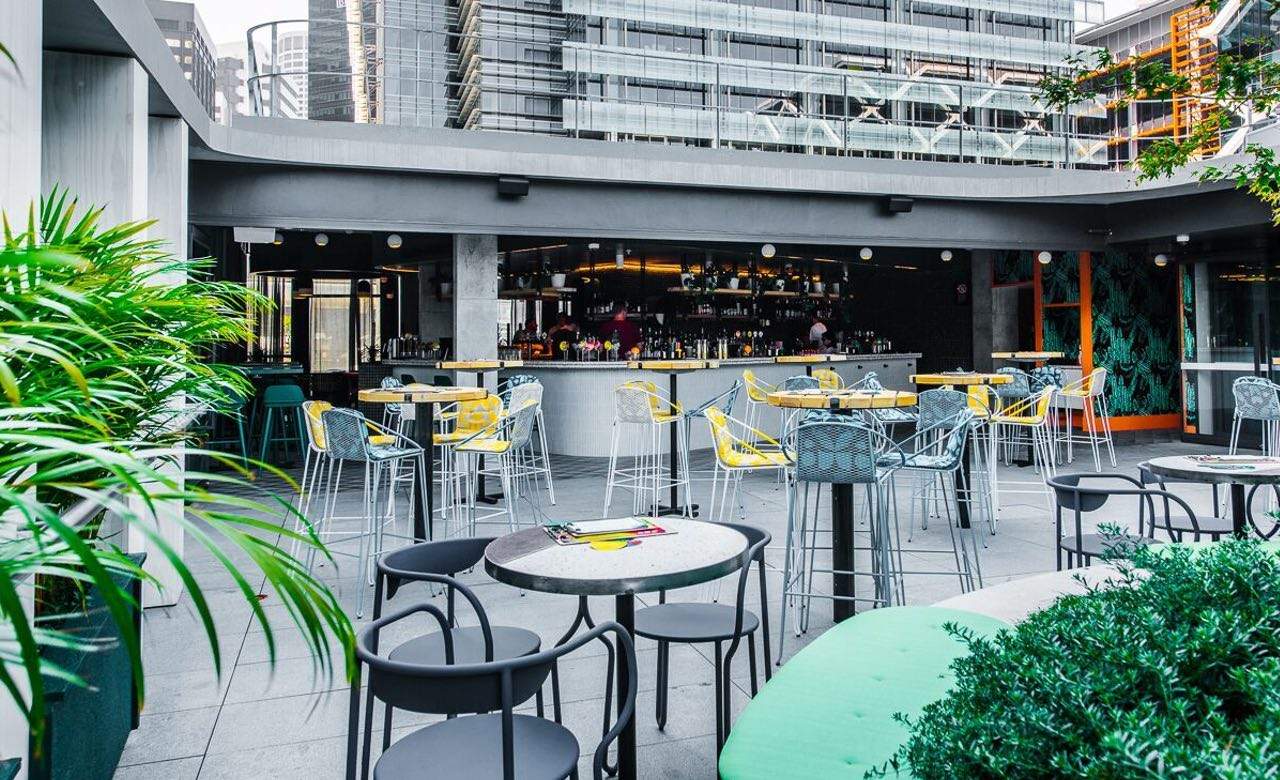 Untied and its sweeping views over Darling Harbour gloriously joined Barangaroo as the precinct's first rooftop venue in January 2017. Opened by Dixon Hospitality (The Norfolk, The Forresters, The Rook), the 260-seater, indoor-outdoor bar pays homage to the tropical northern Queensland rainforest, with a brightly coloured fit-out full of lush greenery. The food menu features barbecue share plates among all the requisite rooftop bar snacks. 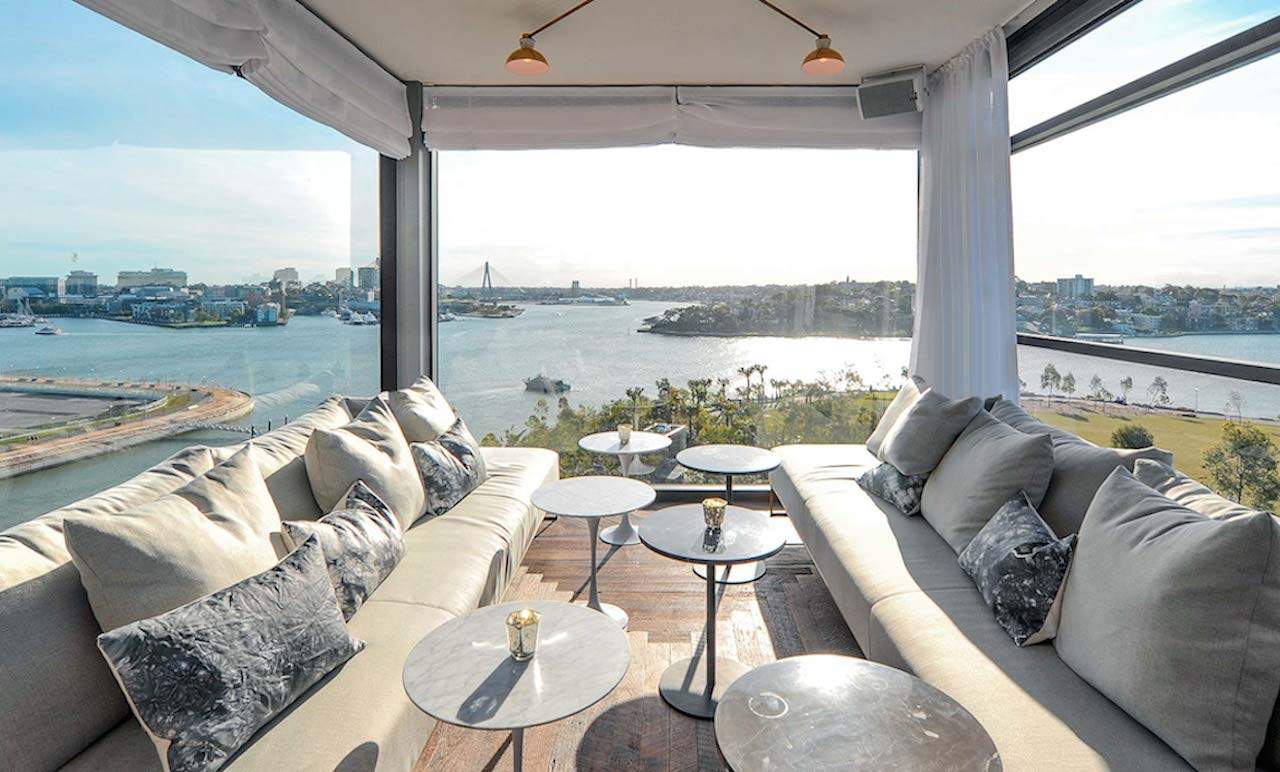 Millers Point's swanky, panoramic sky bar, Henry Deane, overlooks the Sydney Harbour in all it's glittering glory and offers one of the best sunset views in the city. Located on the top two levels of the historic Hotel Palisade, the bar boasts a 1920s Hollywood glamour with pink leather lounges, luxe copper furnishings and marble tabletops and walls. 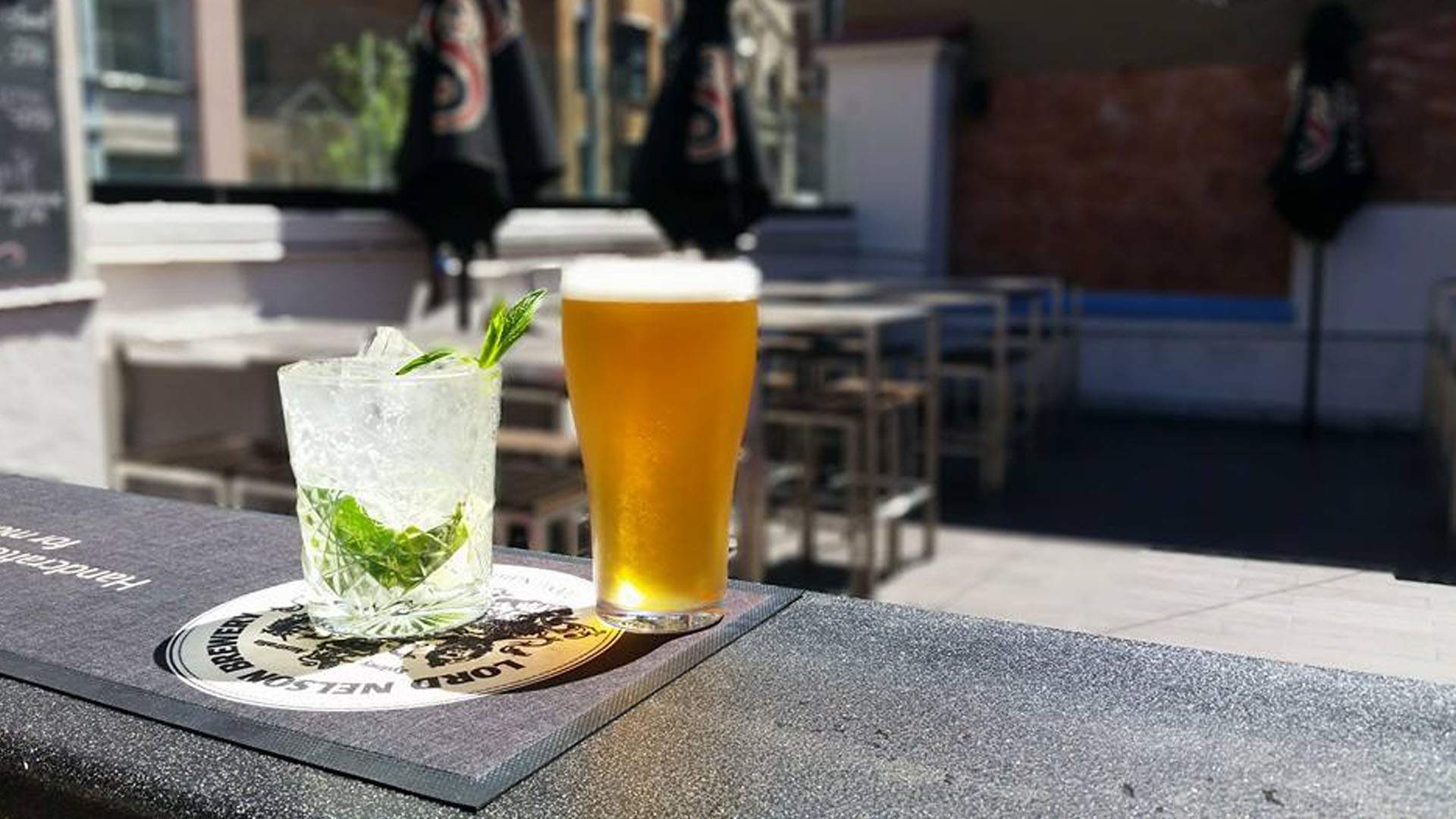 Don't be scared to walk the seemingly endless flights of stairs up through the dingy Hotel Sweeney's, there's a pleasant surprise waiting for you at the top. The eight-table Dot's Rooftop is one of the best places to grab a cosy beer in the city. The space is popular with the after-work crowd, as well as anyone who's looking for a rooftop haven from the busy Town Hall below. The Rook feels far removed from the madness of York Street, like an oasis from city. Despite the bar's casual vibe and eclectic, recycled interior, the drinks and eats are dedicated to the finer things, like lobster. Eating lobster in an laid-back Australian bar may seem strange, but the crustacean is super-fresh, delicious with a few casual drinks and well worth the price. The Rook has been open since 2013, but it still stands as one of the best rooftop bars in the inner city. Corridor is Newtown's best kept secret. The aptly named small bar is surprisingly not just one busy room, but is cleverly composed of an assortment of nooks: a private table at the front, stools clustered under the stairs, the upstairs 'lounge' room or the upstairs courtyard — take your pick. It's a fairly small wooden rooftop deck, but it's worth it for the drinks, the live jazz (Tuesdays and Thursdays) and the unpretentious local crowd. 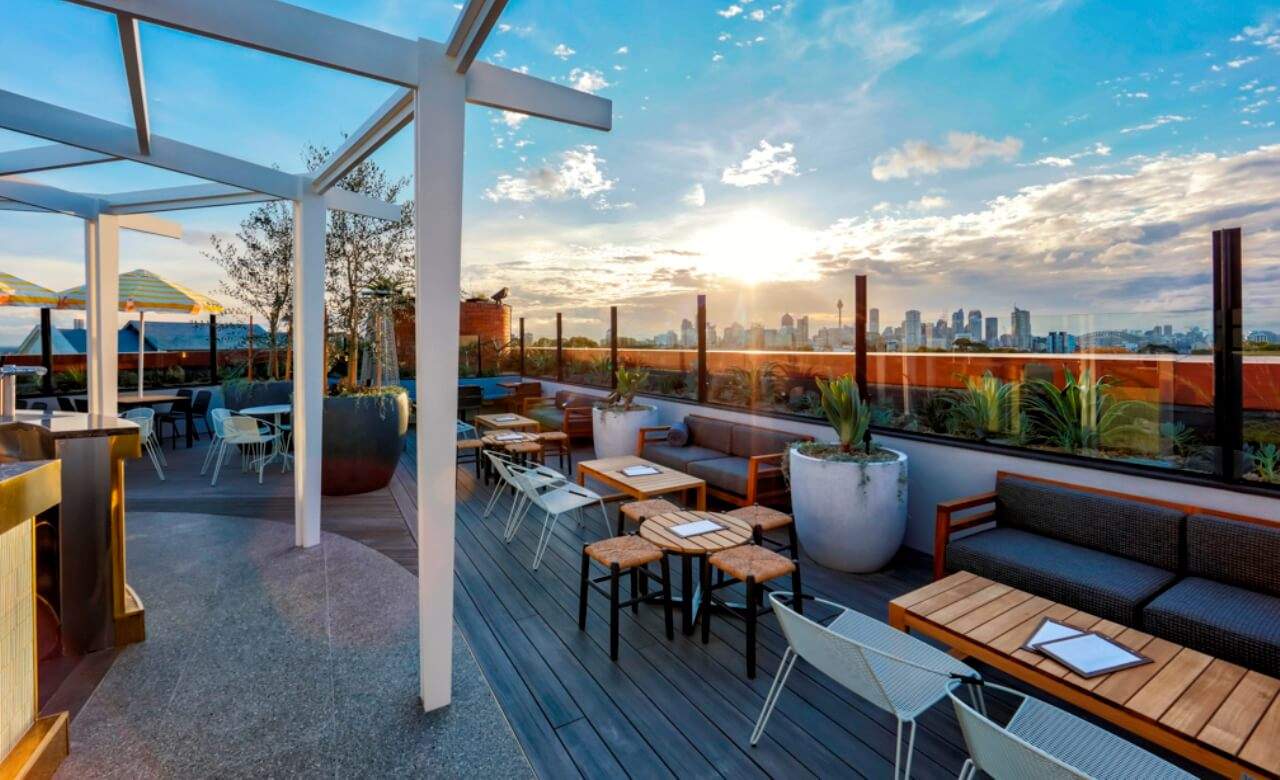 Woollahra's Light Brigade Hotel is one of the many recent changes inflicted on Woollahra's beloved Oxford Street hotel. In November 2016, the pub reopened after an extensive renovation and came out the other side a whole lot fancier. They've since added a rooftop as part of the four-storey hangout, offering pub-goers a lush space above Oxford Street. The rooftop functions as a combination space for drinking and dining, and is designed to feel 'as casual as a neighbour's terrace'. It has a circular bar that fans around the terrace, a wood-fired pizza oven and views of the Paddington rooftops and Sydney harbour skyline. Located at the intersection of South Dowling and Flinders Streets in Darlinghurst, The Local Taphouse can go slightly unnoticed. With 1920s-inspired decor and a garden-like roof, the Local is anyone's wonderland. The beer haven is the brainchild of Steve Jeffares and Guy Greenstone, two beer enthusiasts who conceived the inspired idea of opening a taphouse for all those budding beer buffs. They offer beer pairings to their exceptional food options, most of which incorporate beer in the cooking process. The Glenmore is hardly new, but it certainly has a new lease of life. The much loved local's-style pub remains on ground level, but as you head up the stairs towards the first level and rooftop terrace, you can see just how much this oldie has been spruced up. It has one of the best views of the Harbour Bridge and the Opera House, and the retractable roof is a great addition, along with the rustic style wooden benches and red industrial chairs.

Published on October 08, 2015 by Concrete Playground