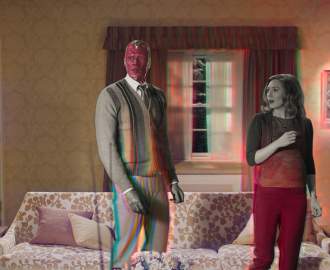 Worth your time: the new movie whose protagonist is haunted by an anthropomorphised STD. Worth your time: the new movie whose protagonist is haunted by an anthropomorphised STD.

Sex and horror movies go so well together, but it never turns out good for anybody. Despite being the most deviant of genres — kids have been sneaking into gory flicks for as long as there have been cinemas, plus slasher movie sleepovers and late-night screenings of cult classics have been corrupting young minds for generation after generation — these gruesome films sure do have some old-fashioned attitudes to this most natural of human interactions.

Here are eight films that have given us something to think about when it comes to scary cinema and what goes on between the sheets.

Last year it was The Babadook, but 2015’s must-see horror film is this chic American indie, perhaps the ultimate culmination of cinema’s warnings about sex. When small-town beauty Jay (Maika Monroe) sleeps with her boyfriend, little does she know that he is passing along to her a sexually transmitted haunting. The only way to stop this mysterious, shape-shifting being from slowly and methodically hunting her down is to have sex with somebody else and pass it along. It sounds loopy, but it works, and is super scary to boot, as Jay and her friends must not only outrun her supernatural infection, but weigh up the moral and bodily obligations of irresponsibly sending somebody else to their potential doom. It echoes with a throbbing synth-driven score that would make John Carpenter smile, and never lets the audience question its ridiculous conceit.

It Follows is in cinemas nationally on April 30.

The 2001 teen-horror flick Ginger Snaps takes a trope as old as the hills — this time lycanthropy — and injects it with a heavy dose of subversive smarts. Director John Fawcett essentially made 'Puberty: The Horror Movie' in this energetic and entertaining horror comedy, presenting the terror of adulthood and its horrific body-altering effects in a terrifyingly new way. Brings new meaning to the old menstruation euphemism, “the curse”.

The characters in Wes Craven’s 1996 bloody whodunit have seen all the horror movies and know all the tricks, including that “sex equals death”. So when Sidney (Neve Campbell) loses her virginity to bad boy high school boyfriend Billy (Skeet Ulrich) and lives to tell the tale, it effectively flipped the script on horror conventions that audiences had come to expect. Unfortunately for poor Randy (Jamie Kennedy), who was “happy to be a virgin” after surviving the genre-reviving slayings, he went to college in the sequel and found out the hard way that some traditions are hard to keep down.

The term “body horror” was around long before Canadian auteur David Cronenberg made his first forays into filmmaking, but his unique brand of frights popularised the term. Perhaps never was he more warped than in Videodrome, which is about a television executive who broadcasts a Malaysian program that he believes to be staged snuff (the real torture and murder of anonymous victims), but which leads him down a dangerous path that includes his own torso becoming a sexually suggestive VCR player. Hallucinogenic and bravely surreal, this 1983 film not only demands audiences confront the increasingly techno-oriented world of sex, but asks us to question their own desire for the sexualised violence made so popular in films of the era.

Virginal high school student and babysitter Laurie Strode (Jamie Lee Curtis) can’t even get a date let alone sleep around, which makes her perfect for John Carpenter’s groundbreaking 1974 slasher, Halloween. Every one of Laurie’s friends are dispatched as easily as they take their tops off, but Laurie puts up one hell of a fight in this and the sequel Halloween II. It wasn’t until 1998’s Halloween H20 that a sexual Laurie Strode (now Keri Tate, single mother and private school principal) battles Michael Myers and lives to see another day. Well, until the sequel Halloween: Resurrection, wherein she plummets to her death from the roof of an insane asylum. The slasher movie’s sex = death rule found even stronger adherence in the never-ending Friday the 13th franchise, which began in 1980.

If you’re sick and tired of explaining why you don’t want to have children, just reference Roman Polanski’s film about a young woman who believes there is a witch’s coven in her fancy new Manhattan apartment building and that they’re planning on having her birth Satan’s baby. That’s messed up! This scandalous creeper classic is every expectant mother’s worst nightmare. Just six months after the film’s release, Polanski and then-wife Sharon Tate would discover they were expecting a child, but no amount of Hollywood horrors could prepare him for the violent events that followed.

Alfred Hitchcock’s iconic 1960 Oscar-nominated horror begins with a cheating couple lounging in their risque underwear in post-coital bliss. Not even five minutes in and already audiences of the day were aware they were seeing something new and different, including a heroine who was a thief with dubious sexual morals. But when Marion Crane (Janet Leigh) strips down to take a shower in the unassuming Bates Motel, she gets her comeuppance. Smartly playing with audience expectations, Psycho shocked crowds and gave karma a wicked name.

Vampires have always been a much sexualised villain. Whether it’s the teen sexual angst of Buffy the Vampire Slayer or the after-dark strip club employees of Vamp, the art of seduction is key to the nature of being a vampire. And so despite its age, it’s not surprising that FW Murnau’s 1922 gothic horror Nosferatu, a blatantly unauthorised adaptation of Dracula, is full of it, too. In the film’s famous climax, the female heroine, Ellen (Greta Schroder), uses her goodness of heart and distracting beauty to hold the nefarious Count Orlok at bay just long enough to see him stung by the rays of the morning sun, ultimately brought down by his need for sex (aka the drinking of her blood) from a virtuous woman.