Ken Griffen is the rare kind of artist who arrives at 9:56am for a 10am coffee. He's also the type who would stay another 20 minutes after the foam in the coffee cups have hardened and the recorder's been turned off, just to talk some more about the world.

We're at Alleluya Café. Griffen's covered in strong, structured layers of black in assorted textures. Besides his left hand rests a black Moleskine filled with neatly written hieroglyphs and safeguarded thoughts, in his right, a macchiato. It's raining.

Griffen has about him the ethereal quality of seeming simultaneously deeply absorbed in the conversation at hand, as well as being elsewhere; hiking along some inner landscape. Everything about him is careful, ordered, but intriguingly elusive – as if all his sentences ended in semi-colons, the second clauses hinted at but left unsaid.

It's that very essence that permeates his work. The articulate yet magnetic aesthetic of his art has made of him a palmy commercial artist – doing graphic design, creative and art direction and even tattoo design in cities like Berlin, Stockholm and Rotorua for the likes of Huffer, NO magazine and Casio. He also runs his own independent agency, Roaring Fork. 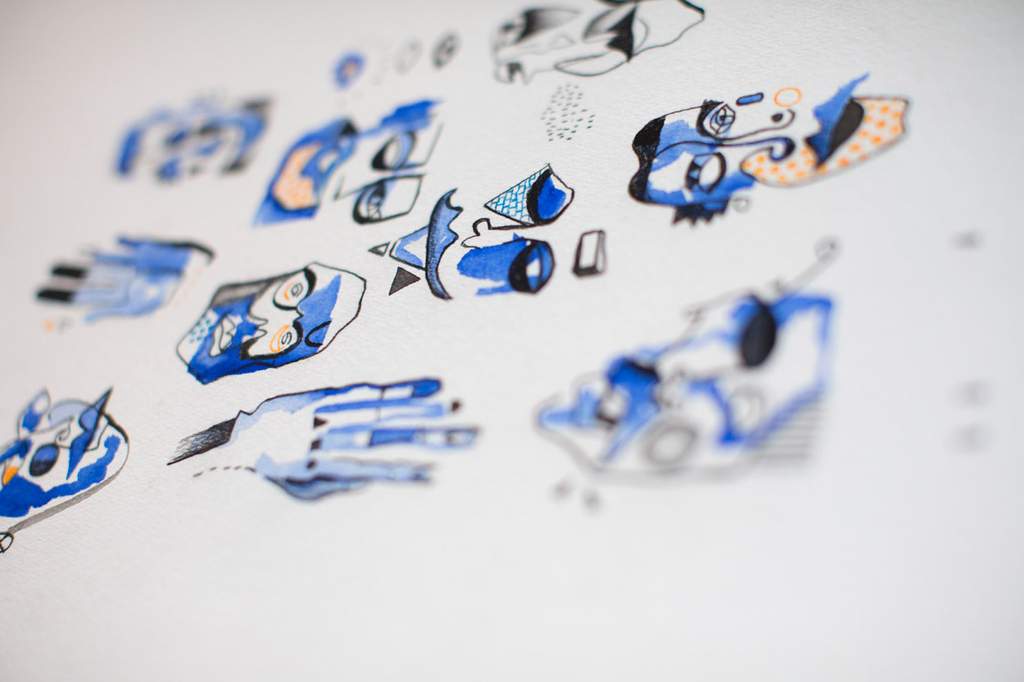 As a kid growing up on K' Road, Griffen found his way into making art seamlessly. "I was always doing art, arty stuff, my mum was an artist, and I enjoyed it. And then I went to AUT and did graphic design, which was really – which was three years of just smashing it out quickly." Although, as per usual for young artists, he didn't get a job handed to him on platter alongside his diploma. So he travelled instead, and has been doing so intermittently ever since.

His distinct style emerged the day an art homework assignment at school was left undone until class started, at which point he just frantically drew something. That style became his personal wheelhouse, although he notes that unlike his surrealist stylistic beginning, he nowadays does "have an initial idea, but it definitely develops." His style is self-described as "following conventional rules but then going somewhere unexpected with it." Face Value is his first solo exhibition. In contrast to his commissioned work, the prints he created alongside Tom Burnett carry with them the quality of a renewed naivety. A series of watercolour abstractions reminiscent in varying degrees of Miro, Picasso and Kandinsky. The prints are pared back – but stubbornly joyful, curious.

Face Value explores the crust of human experiences – "Fleeting relationships, encounters, sightings. Making brutal and instant generalisations on society under the pervasive guise of our personal perspectives" – his exhibition preamble eloquently reads. The prints also serve as a record of Ken's limited meetings with strangers while travelling. "I mostly got inspired by people on trains – people with interesting faces, drunks mostly… They would come up to me and talk to me while I sat and sketched them."

These printed artefacts of his temporal encounters with strangers will be on show for a limited time from May 28th until June 5th at the Allpress Gallery in Auckland.