Little rolls of joy – that’s what sushi is to me – snack size deliciousness rolled up into a façade of healthy eating.

Little rolls of joy – that’s what sushi is to me – snack size deliciousness rolled up into a façade of healthy eating. My nutritionist (when I cared about what she said) once told me I could eat as much sushi as I like in my food plan because it was a “good food”.

And boy, when I pile the deep fried items on to my plate, she was right. But enough about her – what you’re here to see is the short and sharp list of Auckland’s Five Best Sushi Takeaways. A wise woman recently told me that in the early 2000s our fine city had in the region of 20-30 sushi serving locations, but that nowadays it has surpassed 300 – and I’d believe her – she’s a Japanese chef.

On a side note is something else you’ll find of interest, the team at Sachie’s Kitchen (who receive an honourable mention below) also told me something fascinating about sushi. They said that unlike its roadside status in the West, with little stores selling pre-packaged boxes ready to go, the Japanese held it in much higher esteem – a dish to be served for an occasion. It seems us Western folk have lowered the tone of this dish, but in doing so seem to have made it our own, and hell, I like it like that. Now, to the list but with one small note…

Please be aware this ranking does not take into account any big fancy restaurants (although I can tell you that Industry Zen, Soto and Cocoro all do amazing sushi), but instead is your indispensable guide of where to hit for an easy lunch, or if you’re clever like me, where to grab a platter from when it’s your turn to bring the canapés.

Now don’t take the above to mean these places aren’t the best in Auckland – they truly are – I just wanted to provide a bit of context. Many make a great destination for a sit down meal (some also do dinner) and all are worthy of your patronage.

PS – unless it’s made fresh for you, don’t buy sushi in the afternoon – that shit is nasty. Going on two or three years now Bian Sushi has remained my gold standard and go-to for the perfect sushi lunch. Not to be mistaken for the decidedly average Banzi Sushi about 100m further up the road, Bian is award-winning and renowned for its quality. They do the classics, served impeccably well, and I would class the flavours and ingredients as fresh, crisp and premium. Out of all the outlets, I would say Bian’s product is the most ‘first-class’.

Seasoned regulars will know to make the trip before 12:30, as there is often a long line out the door on to the footpath, but as with every adventure, perseverance brings great rewards – in this case Auckland’s best sushi. The range is extensive, including your classic items as mentioned previously, but with some nice local twists that sit beautifully on the Kiwi palette. Personal favourites are the seared beef (Tataki nigiri), spicy chicken katsu roll, pork miso katsu roll and of course, the breadcrumbed ball of mashed potato.

But don’t just take my word for it; both Viva and Metro have placed this eatery in the upper echelons for fresh tastes and pure flavours. If you’re after the best (although pricy) sushi in Auckland, you can’t do any better than Bian. Certainly my second favourite sushi spot in our fine city, Gosu, located conveniently near Bian, is tucked away in a little shop on Mount Eden Road. I first encountered it while strolling to Pilates (gone, like my nutritionist) and noticed the award certificates outside proclaiming it to be Auckland’s best – it sure didn’t look like it.

How wrong I was. Unlike Bian, which prides itself on crisp pure flavours, Gosu takes your regular and adds a whole new twist to it. There were flavours I’d never seen before, things I couldn’t believe. It was a place of fantasy where my sushi reality was ripped apart – bacon and egg sushi roll…what deliciously unholy creation was this?

Gosu favourites include a variety of risqué flavours for the unprepared – chicken and bacon, feta, whole baby prawns, there’s everything and anything. With a wide variety, it’s a literal smorgasbord of selection and choice.

If I could say Bian nails perfection and the classics, Gosu slam dunks it with tastiness, creativity and off-the-wall-ness. If you’re after a no-nonsense sure-fire sushi hit, the range of outlets and reliable quality of Bien makes it the ‘St Pierre’s’ of actually decent sushi.

With all your standard goodies, they also mix it up with a few less common varieties like the Italian Salad Roll (sun dried tomato, basil pesto and avocado), the fried oyster roll (fried oyster and tar tar sauce) and carrots roll (cooked carrots, egg and green beans).

If you’re after a spot-on sushi lunch, Bien will do the trick every time. There’s nothing more to say really – this is the gold-star standard to beat. They're all over Auckland (Newmarket, CBD, Greenlane, Viaduct) so best to check the website for the one nearest you. 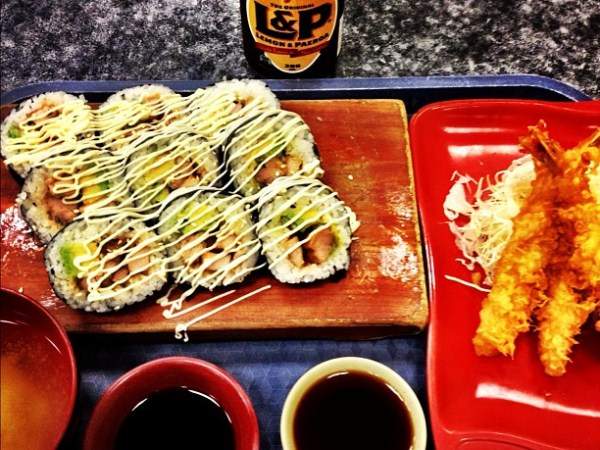 While not the classiest of establishments, the Mercury Plaza food court is a hallmark of good, cheap and sizeable eats. All Blacks and Warriors players are regularly sited and it’s many the suburban crew that have ventured to its halls in search of a delicious meal. Therefore, it will come as no surprise that the sushi outlet (which actually has a name – Sushi Bar Salmon) is second to none.

Looks can be deceiving and Sushi Bar Salmon proves that once again. The friendly team are always happy to prepare a fresh sushi platter which tastes superb. They don’t deviate from simple fare but the food is delicious and the price is right. Always worth a visit – especially if you’re in week three of the monthly pay cycle. This one is a little more special and time-critical, but if you’re after something amazing to kick-off your week, it can’t be beat.  It would be closer to the top, but at one day a week can be a little challenging! Sachie’s Kitchen is a small Japanese cooking school tucked away on St Georges Bay Road that offers a range of introductory and more advanced Japanese cooking classes (great gift for parents – Father’s Day anyone?). While these classes are excellent, every Monday the teaching team put on ‘Healthy Monday Sushi’ where the public are welcome to pop in and purchase their lunchtime fix of sushi delight.

I cannot stress enough how delicious this is. While you either have your standard sushi takeaway in a little plastic box, or your fine-dining equivalent in a restaurant, Healthy Monday Sushi allows you to get the quality ingredients of a top eatery prepared by a team of Japanese cooking experts. It’s truly unique and well worth the visit.

And that’s a wrap (hah!). I’d encourage you to give all these places a try – each has their own idiosyncrasies and direction, with a different take on what Kiwi sushi lovers want. And if you’re after something really special, well there’s always Industry Zen, Soto, Cocoro and a range of other stellar Japanese establishments. We’re really spoiled for choice when it comes to Asian eating here – and I’m happy to embrace it.