Concrete Playground meets Mike Hall. One third of The ARC and Arcade

Concrete Playground sent some questions through to the boys behind street fashion store Arcade and party starters The ARC. Mike Hall, one third of the talented entrepreneurs, tells us where Arcade comes from, where it is going, and where he is going to see in the New Year.

Tell us about Arcade?

Arcade is our shop on Cross Street in Auckland City. It's a core skate shop as well as being a place for our friends and community to engage in creative projects. We stock street wear from around the world, but we really take pleasure in being able to stock local stuff, and to do things that help promote the culture of Auckland. We have a lot to be proud of here, an amazing history in skateboarding, and artists and musicians that are world class. If we can help people from Auckland get up and get recognized for what they're doing we're happy. Arcade is also the name of our clothing company which is an extension of the shop and will be available in Australia and the US by early next year. What is your guys vision for the store?

We want to create a place that's going to continue on for a long time and belong to other people just as much as it does to us. We have a rad crew of kids hanging out all the time now and we'd like to hand it on to them to run in the future. We're going to keep building it for the moment, and everything we do there is something that people will hopefully remember. We had the DHDFDs play and people were standing there wide eyed while Scott was jumping off stuff and bleeding, and afterwards they were like "I had no idea I liked punk, I've never seen anything like that in my life". Things like that help change the timeline of the city. Skateboarding is something that always brings in the most diverse and creative group of people, so we know that's something that's always going to be exciting. 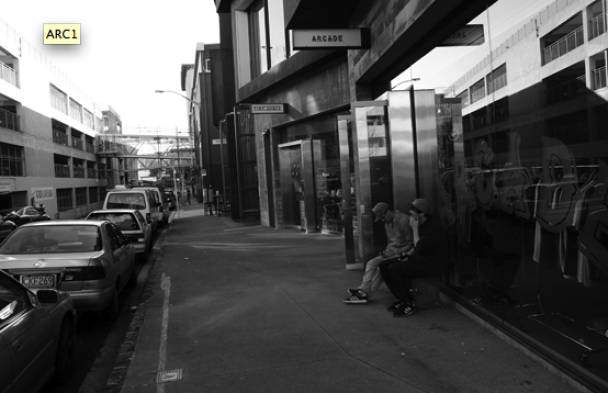 We love what you guys are doing with second hand skateboards and under privileged kids. How did this all start and how is it going?

I'm not sure that all the kids who benefit are necessarily under privileged but some definitely are. Our friends Simon Thorp and Adam Wharekawa run skate schools in Ponsonby and have been doing some in Otara. They were telling me about the kids out there who are so good and so driven but either don't have the means to get new boards or when they do they get targeted by older guys and get them stolen. Seeing as we get heaps of old decks from people buying new ones they asked if we might have any we could give out. We decided to add some incentive so we'd have more to give. Now everyone who brings an old board can get 20% off a new one. The response has been great so far so it's something we're going to continue for sure.

The ARC have played with the likes of Gaslamp Killer, Flying Lotus and have won back to back Redbull Thre3style Championships. Tell us more about the ARC, its roots and where it is heading?

It was kind of an early manifestation of the shop, the same idea really. We wanted to do a party that included everyone and all kinds of music since everything had gone stale. ARC stood for Auckland Renewal - like an urban renewal project breathes new life in to something. We wanted to make Auckland exciting again and give our friends a place to hang out. It's kind of changed in that we used to have it at the Basement Theatre with live art etc and now it's more of a club night, but we still know 90% of the people there and the rest are cool too. Scratch 22 and Paydirt are amazing DJs and the best in NZ at what they do, so that definitely helps make the parties the best around. We're going to be playing at Highlife Matakana just after Pete Rock, so we're really psyched for that, it's going to be awesome!