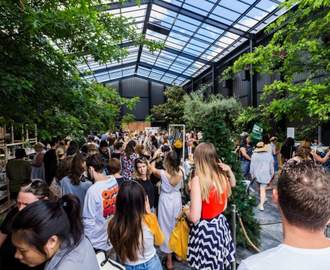 The app that'll help you find your best gal pal.

Sometimes it can feel like making solid female friends is tougher than getting a Tinder date. Much tougher. Women often feel the pressure of social conditioning that encourages them to compete for male attention and view other women as threats. In this sort of landscape, it can be pretty intimidating to approach a fly girly at a party and say “I dig your vibe, let’s get a coffee sometime and validate the living shit out of each other”.

Enter hey! VINA, an app created by developers VINA out of California, which is being touted as Tinder for girlfriends. The app matches you up with likely friends based on your preferences, location and existing networks of mutual connections (via Facebook), letting you swipe your way to the perfect pal. It’s a genius idea and women all over the world have been psyched for hey! VINA to kick off in their city. In fact, the VINA team can barely keep up with demand and have had a crazy few weeks trying to roll it out to all the women who want it. There’s a waitlist! And of course, the app is available for use by all women and everybody who identifies as female. But why is the app necessary and so incredibly popular? Olivia Poole, VINA co-founder and CEO alongside CTO Jen Aprahamian, says that strong female friendships are everything. Literally, everything. "Studies show that relationships are more successful when women have a strong circle of female friends, and we're in an era professionally where it's important for women to think like the "boys club" and support one another and push each other forward in our careers. There's the old saying that you're the sum of the five people you spend the most time with, so it's important to surround yourself with women that you admire and inspire you to be the best version of yourself."

Poole says the overwhelming response may have something to do with the rise of the girl gang over the last few years and the prominence of non-competitive female friendships and #squadgoals, as demonstrated by girl-gang queen herself, Taylor Swift. Or it may be that more woman are finding themselves isolated from their friendship groups as life changes, such as moving cities and having babies start, to take a toll.

"Our social circles are always in flux, and it's important to invest time in building new relationships with new friends on consistent basis," says Poole "Everything great that's ever happened in my life has generally come through my network of friends."

Poole adds that Australia is definitely on their radar for hey! VINA. The best way to get the app out here faster is to sign up and get on the waitlist, which you can do over here. In the meantime, check out the VINA's air-punchy girl-power app Ladybrag, where women celebrate the little victories.