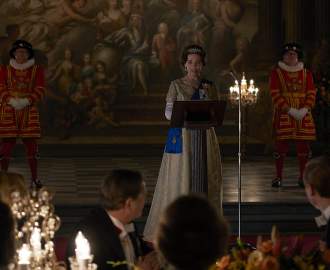 To criticise a Tarantino film is an undertaking not without its share of reservation. Perhaps even trepidation. The first instinct is self-doubt: “Did I miss something? Was I simply in the wrong mood? Is three hours just the norm now?” After so many hits, there's an almost ‘infallibility’ to the man, a near reverential status through which both fans and critics dismiss any purported shortcomings as either misinterpretations or outright lunacy on your part. There’s no denying Tarantino’s talent – he’s a writer and director of extraordinary vision whose early films in particular command regular repeat viewing. But he is, ultimately, just a man. And men, and their movies, sometimes fall short of perfection.

So, then, we come to The Hateful Eight, the opening titles of which declare it 'the 8th film by Quentin Tarantino’ (Kill Bill is counted as just one film for those playing at home). It’s also the second (though presumably not last) western from a director who recently said "you have to make at least three Westerns to call yourself a Western director. Anything else, you're just dabbling". Set in the unforgiving snowy mountains of Wyoming a few years after the Civil War, the film's a slow-burn thriller played out almost entirely in two tiny, cramped locations: a four-person stagecoach and an isolated cabin by the name of 'Minnie’s Haberdashery'.

Cast-wise, many of the Tarantino regulars are there, along with a handful of newcomers. Kurt Russell leads the pack as John ‘the Hangman’ Ruth, a ridiculously moustachioed bounty hunter escorting wanted felon Daisy Domergue (Jennifer Jason Leigh) to the gallows. Along the way they happen upon two additional passengers: fellow bounty hunter Major Marquis Warren (Samuel L Jackson) and the soon-to-be local Sheriff Chris Mannix (Walton Goggins). Tarantino’s opening dialogues have become iconic, and this one's so long it comprises the entire first two ‘chapters’ of The Hateful Eight, accounting for almost a full hour of the film. It’s not without its charms, but compared to the unrelenting tension of Inglorious Basterds, or the glorious bastardry of Reservoir Dogs, this feels overblown and indulgent. By far its most compelling character is also its least involved: Daisy, a feral, black-eyed murderess whose wry smile after having her nose broken offers more menace and mystery than the sixty minutes of material that surrounds it.

The remainder of the film plays out at Minnie’s, and if nothing else it’s a masterclass in cinematography. Shot on Ultra Panavision 70mm film stock (last used fifty years ago on Khartoum), Tarantino captures astounding depth and detail within an almost impossibly small space. It’s here, too, where we discover the rest of the ‘eight’: the loner cowboy (Michael Madsen), the Confederate General (Bruce Dern), the dandy Hangman (Tim Roth) and the Mexican stablehand (Demian Bechir). Trapped by the blizzard outside that absolutely makes you feel cold, suspicions steadily compound until, inevitably, tensions boil over into a phenomenally violent conclusion.

That’s no spoiler, by the way. It’s just Tarantino.

There’s still a lot to like about The Hateful Eight. The performances are outstanding, the story’s engaging and it’s peppered with all the usual Tarantino easter eggs (Red Apple cigarettes, anyone?). The score, too, by veteran composer Ennio Morricone is terrific, so unsettling it almost deserves to be christened the ‘hateful ninth’. Like Django Unchained before it, race relations (or the lack thereof) underscore much of the movie's themes, representing a definite politicalisation for the director, whose script offers up lines such as “when n****** are scared, that's when white folks are safe”, later countered with “the only time black folks are safe is when white folks is disarmed”.

Ultimately, though, length returns as the film’s principal failing. It’s so long that some cinemas are even showing it with a 12-minute intermission, and it's hard not to escape the feeling that a concerted edit down to 90 minutes would have robbed it of nothing whilst ensuring the wonderful 'slow burn' steered clear of 'sluggishness'.

…unless I just missed something?