All things deep fried and doughy.

The last few years have seen a doughnut renaissance of sorts. It strikes one as rather droll that this hasn't engendered a decline in gym and diet advertising, but we urbanites seem well versed in paradox (and who am I to judge?)

Indeed, unless you've been living under a rock, you're probably aware that American export Krispy Kreme opened a store on our shores a couple of months ago. Apparently their morsels are worth the hike to Manakau (one woman even camped outside the store for two days prior to its opening). But for the purposes of this feature, and in search of something a bit different than your mass-produced nut, I did what every good millennial would do: cleared my throat, and calmly asked Siri where in Auckland I could find the best doughnuts. Unfortunately, Siri misheard me — where can I find the best "turn ons" in Auckland — and brought up a list of shady looking establishments. A failure? Well, not necessarily. It got me thinking, you see. Perhaps Siri was onto something. For doughnut lovers, yours truly included, there is something peculiarly erotic about all things deep fried and doughy.

Though the doughnut, like many a fried food, lays claim to a long and varied history, a few things remain consistent over time. I turn to these in order to strip it down to its key elements: (1) a yeasty dough, hand-kneaded or at least given some TLC in small batches; (2) something to fry this latter in; (3) and last, but not least, a generous amount of cinnamon sugar or icing glaze with which to coat it. Get these things right, and the rest will follow. Without further ado, let us present you with eight of Auckland's finest. Bluebells Cakery has several outlets, my local being the Eden Terrace branch. On a dreary, thoroughly typical Auckland Sunday, I headed along to sample the goods. The café speaks to a cute mid-century tearoom aesthetic, but without the stuffy ostentatiousness this too often entails. I had their long-form, cream-filled doughnut. It blossomed in a perfect equilibrium on my tongue, with the salted caramel drizzle adding a nuance of flavour to every bite. Complementing their fab doughnuts is coffee from renowned roaster Supreme. This stuff is so good that you should do yourself a favour and order it black. 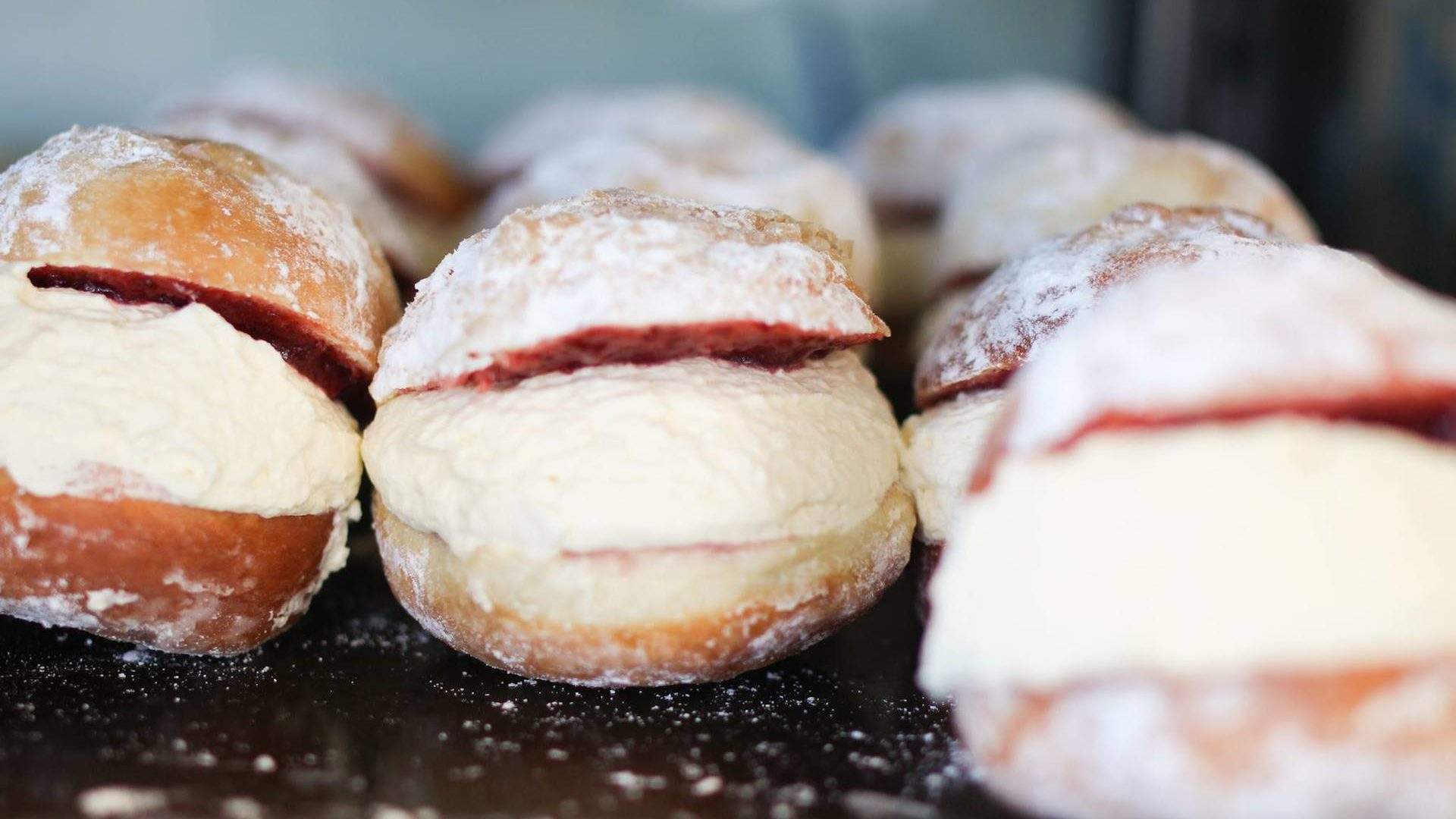 Staff wearing cute denim overalls? Tick (my inner queer woman sighs happily). Perfect filter coffee? Tick. Amazing doughnuts? Tick, tick, tick. The Mustard Kitchen takes the classics and executes them in ways that are fun, affordable and delicious. Four options to sample here, from your classic cinnamon-sugar encrusted number, to one bursting with chocolate ganache. If you're in search of a Kiwi favourite, the other two doughnuts that complete Mustard's lineup are round and long forms of the fresh cream and jam nut. Come for the friendly vibes, stay for the brilliant café fare. With one of the most reasonably priced menus on this list, and at only a few minutes (walk, drive or ride) from the CBD, The Mustard Kitchen is an untapped Auckland treasure. There's a curious trend at which I continue to marvel: administering sweet and savoury fillings intravenously to one's meal. Apparently the idea arose somewhere in Napier. The humble syringe, in any case, has segued from hospital and junkie toolkit to upmarket café table in the blink of an eye. Once I get over the oddness of injecting salted caramel, which looks just a little too much like morphine, into my freshly baked doughnut, any misgivings about this strange bougie act of appropriation fade. What remains is Foxtrot Parlour's expertly crafted, doughy caramel bliss. For the genius of the syringe, one has to allow, is that it ensures the crucial crispiness of the doughnut is preserved until the last possible second, no sogginess provoked by the filling before one is ready to bite into it. If caramel is not your jam, there are three other flavours to inject and nom: berry coulis, bay leaf-infused custard, and Varlhona chocolate, all accompanied by a dish of whipped cream. Last time CP surveyed Auckland's finest doughnuts back in 2016, this St Kevin's Arcade café featured for its scrumptious ricotta-filled doughnut balls. Two years down the track, and they're still crafting some of the best doughnuts around, but ricotta is out, and apple pie is in. These beauties come with pecan sugar and salted caramel sauce. As with Bestie's previous offering, a charming balance of sweet and not-so-sweet is maintained, whilst the fresh fruit ensures a hint of tartness and a whack of yum. Tart achieves what every 'well-meaning' non-vegan considers impossible: a light and crispy dough, with a sweet and creamy filling, sans animal products (that's no dairy, no eggs, just brilliant pastry work from owner Philippa). This is doughnut innovation of a strikingly different sort to that undertaken by chain purveyors. For Tart's tweaking of traditional patisserie methodology has an ethical goal in its sights, one which does well by human and non-human animals alike. The bakery's take on the cream doughnut is to die for (pumped full of coconut cream, it's not too sweet, but definitely decadent). Dig in. 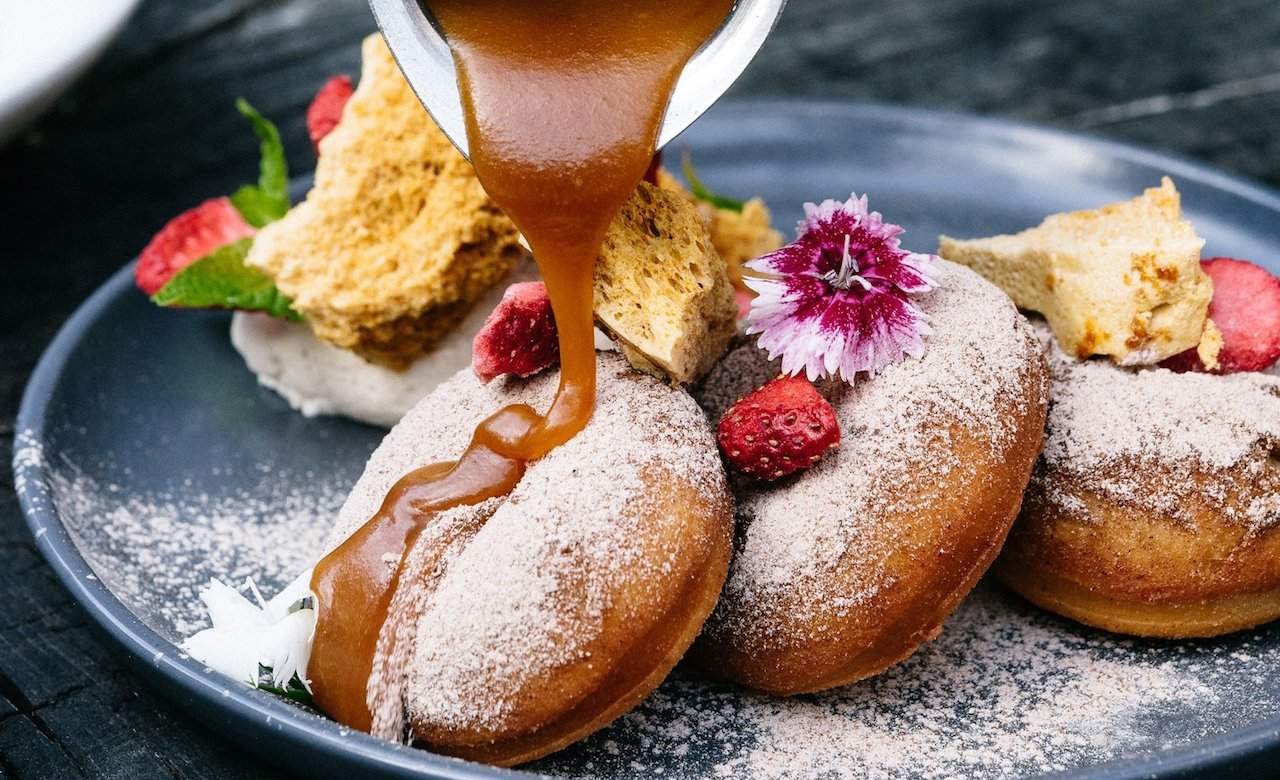 The downside to the filled or iced doughnut is that either it must be cooled first, or served with something very thick inside (salted caramel, sticky jam). If you like your doughnuts warm, and isn't there something a bit nostalgic, a bit naughty about still-warm patisserie goods? Miss Moonshine's has a solution. Three Orleans-style donuts cooked to order, with hokey pokey, salted caramel, and cinnamon-spiced cream on the side. At $16, they're the most expensive offering on our list. Bear in mind, however, that what's proposed here is more of a dessert, easily allowing ample carby-sugary goodness for two people. For virtuosic modulations of flavour, Little & Friday is the clear winner. The famous cream and raspberry morsels remain worthy of their place atop many a best doughnut list — the subtle differentiations in crème diplomat, dough, and raspberry coulis, coalescing in an oozing eruption of sweet, tart and chewy; your palate couldn't ask for more. Still, I don't think they win on every score. Biting into my doughnut, I felt as though I was eating a sponge cake, which while as light as it should be, was somehow a bit too cakey (for a doughnut). Perhaps I simply needed to try it earlier in the day, though, as when I sampled their cinnamon and sugar ring doughnut, I found it at least on a par with others on this list. Contra received doughnut wisdom, this minimalist rendering proves much springier and lighter than the filled nut, and really showcases Little & Friday's patisserie genius. 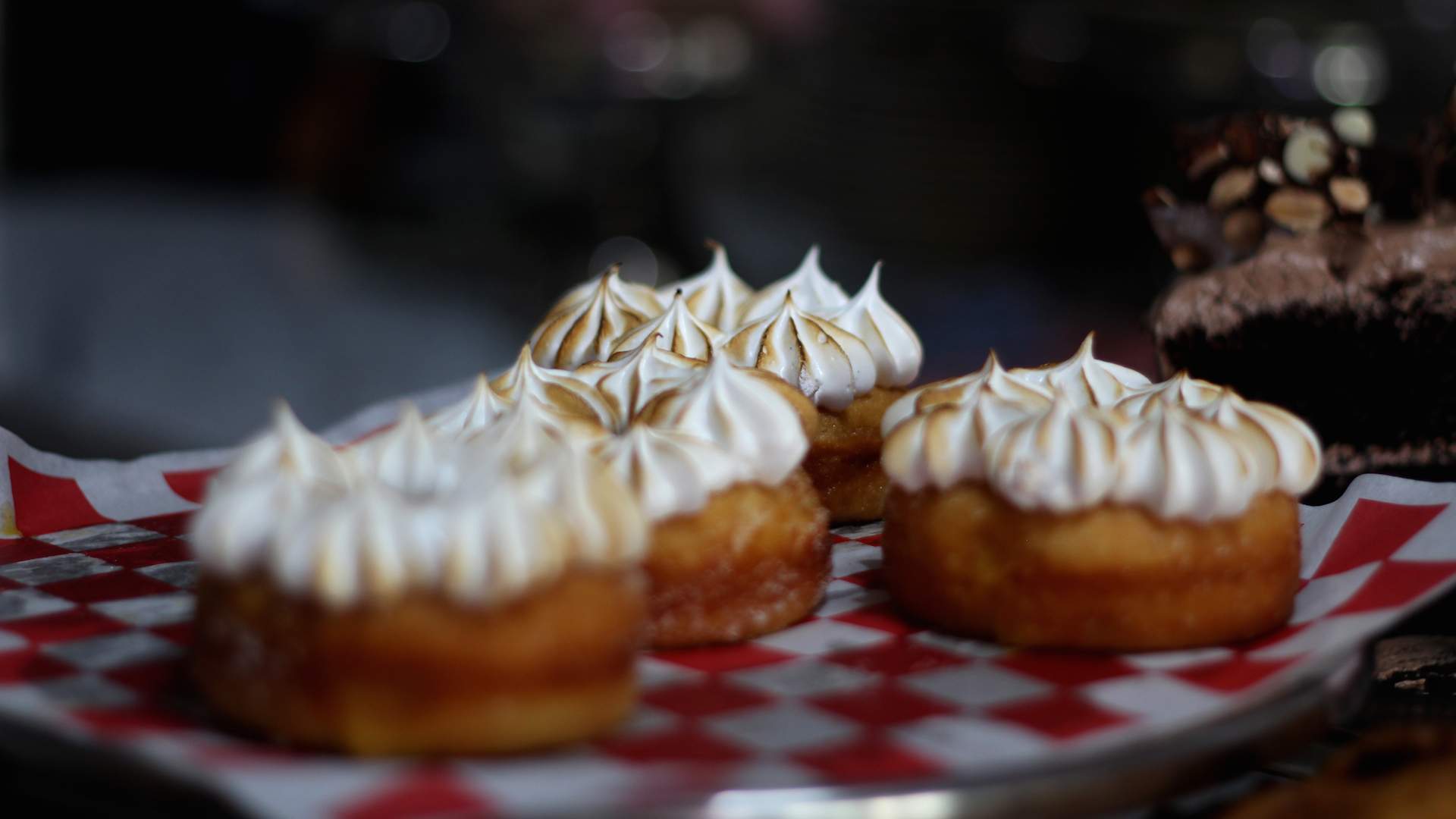 If you're more of a Homer Simpson in your doughnut proclivities, Doornuts has got you covered (they even have the 'Homer' doughnut — strawberry-glazed with sprinkles). Handcrafted daily by mother-daughter duo Danielle and Suzanne, Doornuts offers an unmatched array of mouth-watering doughnut flavours (I sampled the Bourbon Maple Walnut and Chocolate & Mini Praline). Besides, if you're really channelling Homer, and don't want to leave the couch, Doornuts, as the name suggests, offers a delivery service (free within the CBD). Finally, the selection of vegan doughnuts even rivals Tart's, so here's hoping that such competition leads to better and better doughnuts for us vego folk. Al is Aleks Lazic from Montreal; a man with a passion for good food who trained at Le Cordon Bleu restaurant in Paris and has worked at renowned fine dining restaurants all over the world. His expertise and love shows through his doughnut creations as they're the only ones in Auckland which give Little & Friday a run for their money (at only $5 or $6 dollars). They're all amazing, but favourite flavours are the Snickers, the Crunchie with honeycomb custard, and the lemon meringue — all of which come with a wee syringe of filling.