100 Hours in Sydney: A Trifecta of Restaurants, Hassle-Free Golf and Plant-Tastic Skyscrapers

With better weather and architecture and equally as grand geography, it's hard for a fan of Auckland to not also be a slightly gushing fan of the Australian metropolis.

I knew there was this skyscraper in Sydney covered in plants and I knew I had to visit it, but I'd forgotten to check which part of the city it was in. And then I pulled up in my cab, grabbed my bags and looked up: there it was. As in, the building right next to my hotel was the forest in the sky of all the photos, and of late, all the awards too.

One Central Park is not just a famous building any more, it's widely acclaimed as one of the best modern skyscrapers in the world. With the wealthy cities of the Middle East trying to ruin everyone's fun with buildings so much taller than the previous record holders (At 828m, Dubai's Burj Khalifa was a full 319m taller than the Taipei 101, itself only 57m taller than the former title holders in Malaysia, the Petronas Towers), architects have been forced into finding new ways to get noticed.

The pomposity of the Burj Khalifa – a skyscraper so high it threw a century of slowly increasing skyscraper limits out the window – has arguably given rise to buildings like One Central Park. There's no point trying to be the tallest or even amongst the tallest anymore, so you might as well try for the most interesting, the most innovative and the most environmentally friendly. Think Marina Bay Sands in Singapore: a wondrously absurd trio of gigantic, sloping cricket stumps with a mono-bail on top that at 57 storeys are tall, but not especially so. They've become a national icon and an international drawcard. 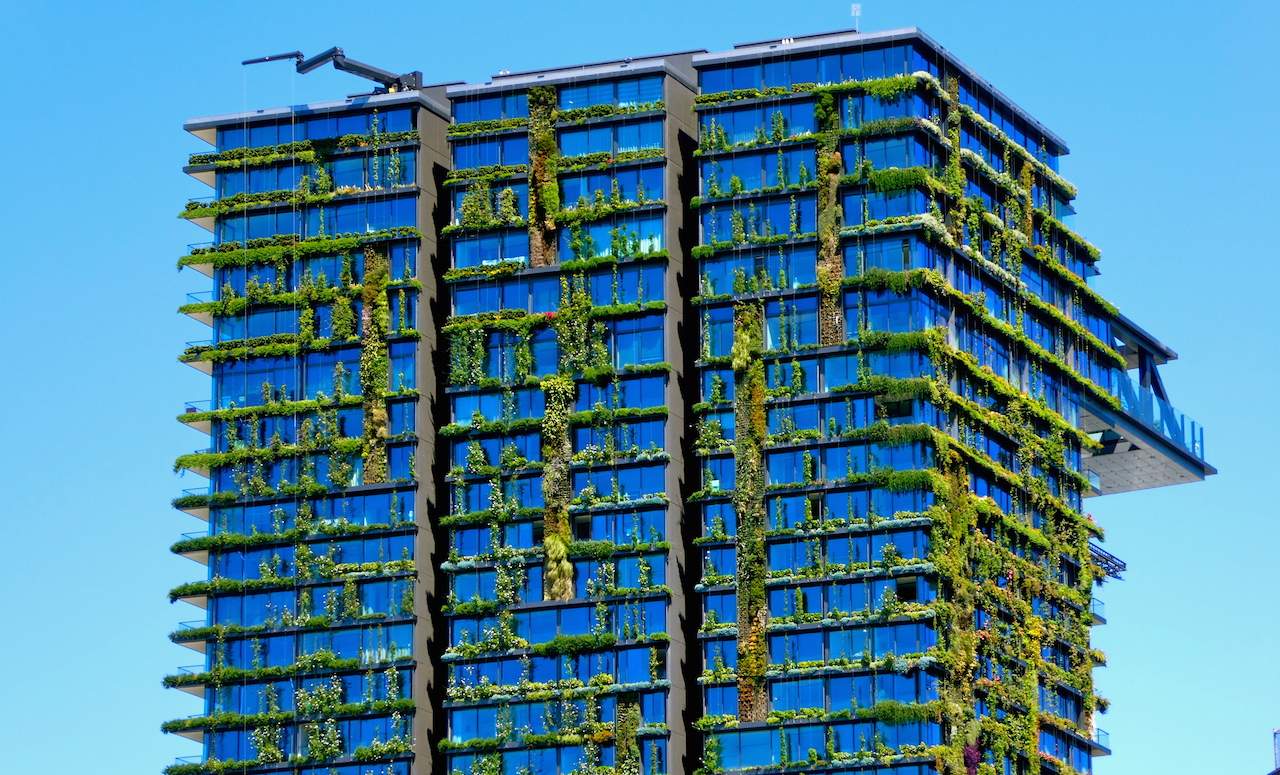 And so the same is happening with One Central Park (completed 2013). 117m and 34 storeys of luxury apartments, a jutting-out, gravity-defying veranda in the sky and everywhere you look, the fuzzy greens of countless, sewage-watered plants. I couldn't stop taking photos. Luckily for me, my hotel – The Old Clare – had its own, more modest-of-height rooftop and provided the perfect location for my shots.

With four nights at The Old Clare, I soon realised that "perfect location" is an apt cliché for this incredibly hip hotel. Situated in Chippendale on the southern fringe of downtown Sydney, this suburb once had a reputation for being somewhere you wouldn't want to walk after dark. The corner pub might not have been quite so rough as to be described as "rough and ready", but Sydney friends suggest it was "ready" at the very least.

In short, not long ago much of Chippendale was little more than a series of old buildings, edgy alleyways and few outside visitors. Fast-forward to the present and the change is dramatic enough for the nickname "Hip-pendale" to have some traction.

That once tired pub is now a picture of slick industrial chic, as is the attached brewery. Indeed, The Old Clare Hotel is an amalgamation of that brewery, that pub and a pre-WW2 hotel. In just a couple of years since refurbishment The Old Clare has succeeded in positioning itself as one of Sydney's premier boutique hotels.

Beyond the peeled-back brick and exposed industrialism that's almost a given for any trendy new hotel operating out of an historic building, the 62-room Old Clare has plenty of unique touches too. For a start, there's a vintage dentist's chair sitting in the lobby, displayed as a piece of art. What should be horrifying is oddly attractive and is offset by things like a retro bicycle and an old-world fridge. Each room of the hotel is different and the genuine luxury doesn't ever try to mask the fact this is a timeworn structure. Somewhat alarmingly, in my room I find not just a welcome note, but also a framed photo of my cat! Thinking I'm hallucinating, I eventually click that the hotel staff must've visited my Instagram account. My Sydney friends debated whether this was creepy or the coolest thing ever, but being this is Chippendale, I've gone with it being a very cool, totally unforgettable welcome.

The roof of The Old Clare isn't just for photos of plant-tastic skyscrapers with there being a lap pool, sun lounges and a bar. The views of the nearby university buildings also provide a clue as to one of the reasons this neighbourhood has taken off. With Chippendale's main thoroughfare of Kensington Street within minutes of no less than five universities, there was always potential for this neighbourhood to have more than a little bit of vitality.

Enter a couple of property developers with a cohesive vision for what Chippendale could be and the changes have been immense. What were once empty heritage buildings are now restaurants, galleries and cute little offices. Laneways have cropped up like Spice Alley – a partially outdoor South East Asian food-court that replaces Chinese shop house ambience for that of old-fashioned Sydney terrace homes.

As a base to explore Sydney, I almost didn't want to leave Chippendale, but there were commitments in the form of three musicals to see and a round of golf on one of the city's most exclusive courses.

There aren't too many times in my life I've been given door to door service in a late model Porsche (at last count I think it was roughly zero), but LuxGolf pride themselves on doing things a little differently. This is a company established by a Canadian chap named Travis who's lived in Australia for just over a decade. Spotting a gap in the marketplace, he's set up a high-end golf-tourism business that targets travellers whose idea of a perfect holiday involves hassle-free golf. Even better if that hassle-free golf is so hassle-free that you don't have to bring nor hire any gear. Nor do you have to find your way to the course because the Porsche will be waiting to pick you up, wherever you happen to be staying. As for where you'll play, LuxGolf gives you access to the sorts of private courses no amount of money could normally get you on. It almost seemed criminal a hack like me got to experience it.

But hey! Travis was instantly likable and it was so much fun to play The Coast – a private course that interweaves the actual sand of beautiful little beaches with the sands of the bunkers as hazards. Some holes have you hitting over cliffs and the ocean below and one involved the finest unintentional trick shot of my underwhelming golfing career to date.

Needing to get considerable air to clear the cliffs and the sea, I panicked. Hitting the ball as hard as I could, despite it being a relatively short hole, I also hit flat. With my ball only a couple of metres airborne, it smashed straight into the cliff-face on the other side of the water. The force of the ball hitting the rocks was so strong that the ball skyrocketed directly upwards, hanging in the air for an age for dramatic effect. Surely my ball was going to plop into the water once it finally stopped rising, but no. There was a gust of wind with the ball suspending itself in the air long enough that it was blown to safety, clearing the water and the cliffs and landing on the green.

In a round that surpassed my highest cricket score, that shot was only rivalled by me ricocheting a ball off a rake in a sand bunker, thus avoiding the hazard.

Three-figure score tallied, it was time to hop in the Porsche and be delivered back to The Old Clare. Farewelling Travis and LuxGolf and promising even more spectacular fluke shots the next time we meet, it was off to the Capital Theatre for one of the three musicals I was seeing during the week.

First had been a matinee of My Fair Lady at the Sydney Opera House where I was equally engaged by the interchanging sets as I was by the famous fish-out-of-water tale. The second show had been Dream Lover – The Bobby Darin Musical, showing at Pyrmont's Lyric theatre. On the one hand a traditional rags-to-riches piece of musical theatre and on the other, a quite sublime recreation of a night at the Copacabana in the 1960s.

The final musical in the trio was hard to beat though and it probably will be for a very long time. Showing at the fantastically opulent Capitol Theatre (just 10-minutes walk from The Old Clare), Aladdin was a fast-paced, wisecracking, Cirque du Soleil-recalling spectacle. Any notion that Melbourne has the monopoly on laneways had already been quashed by my stay in Chippendale, but three musicals in three days and all at charming central-city theatres was also changing my impressions of Sydney. Truth be told, I've always loved Sydney to the point of jealousy. Bigger than Auckland with better weather and architecture and equally as grand geography, it's hard for a fan of Auckland to not also be a slightly gushing fan of Sydney.

But as strong as that feeling is, you've always had drummed into you that if you want arts and culture then Melbourne is the place to find it. Undoubtedly true, but this little Sydney romp proved that it doesn't have to be one city or the other. Plus I'm not sure if Melbourne has a skyscraper covered in sewage-watered plants, though hopefully that's only a matter of time. A classy new restaurant that's so authentically French that most of the décor – including things like the enormous wooden bar – have been shipped over from France. Excellent, attentive service from manager Lionel Richard and his team who create a feel that is sophisticated without being pretentious. An outstanding wine selection – not to mention the extensive mid-strength Absinthe varieties (just to take the edge off) – compliment the French cuisine. Great piece of real estate across the road from the lobby of The Old Clare Hotel. What sounded like a butchery from its name turned out to be one of central Sydney's most popular new restaurants. Sure, this is not the place for those with a meat-aversion, but if you're with friends who enjoy fancy sausages, pork ribs and choice cuts of steak, LP's Quality Meats won't disappoint. The view into the kitchen/butchery adds to a lively atmosphere. Without realising I'd be dining there the following day, I'd spotted the building Cirrus occupies from across the water in Pyrmont the previous night. While waiting for the Bobby Darin musical to begin, I'd walked along the pier and noticed a striking white building of about a dozen storeys and had to stop for several photos. The building curves in and out and shares the ethos of One Central Park in that it's visually arresting without being especially tall.

Back there the next day for lunch, Cirrus specialises in seafood and from the young professionals in suits engaging in a liquid lunch at the table next to me, it's not a bad spot for a beverage either.

Tim Roxborogh travelled to Sydney as a guest of Destination NSW. He stayed at The Old Clare Hotel, played golf at The Coast thanks to LuxGolf and dined at the above highly recommended restaurants.

Published on November 30, 2016 by Tim Roxborogh