Address your own daily mental health needs at their pop-up vending machine until April 8. 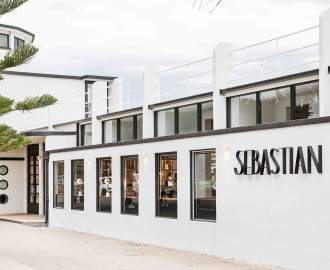 Address your own daily mental health needs at their pop-up vending machine until April 8.

Approaching the mental health of your loved ones, and your own, isn't always the easiest, but two Sydneysiders have produced a novel way to get the public opening up to each other. Intangible Goods is an installation by artists Mark Starmach and Elizabeth Commandeur, who've combined year's worth of involvement in the marketing industry with a shared experience of growing up with family members who struggled with mental health.

Presented by Art & About Sydney at three CBD locations from now until April 8, Intangible Goods makes engaging with contemporary psychology accessible and easy to interact with. The former advertising colleagues share the unusual bond of having family members diagnosed with schizophrenia and have found an outlet for these experiences to go alongside their exposure to the negative aspects of consumerism that's a mainstay of their professional careers. "In both our lives, we found that our families were very hidden about it," says Elizabeth. "They felt like they couldn't be open with their friends or family and that it wasn't something they could talk about publically."

With Intangible Goods, Mark and Elizabeth hope to give people a way to express their inner feelings with an element of fun and whimsy. More than familiar with the typically heavy-handed campaigns marketing agencies produce concerning mental health, Mark and Elizabeth approached the subject with a touch of light-heartedness. Noticing similarities between advertising principals and psychological theories such as Maslow's Hierarchy, the duo wanted to make use of their marketing experience, help people consider their own mental wellbeing and embrace these conversations in a more comfortable way.

Their solution? Intangible Goods — a vending machine stocked with ten different 'snacks' that'll feed your wellbeing. Neatly designed, each product line is the result of considerable consultation with mental health professionals and a survey of 550 of their fellow Sydneysiders who were asked what they needed most in their lives right now.

Mark explains, "Throughout our survey, several answers bubbled to the top. Something like 41% of people responded that they wanted closer connections with the people in their lives, which was a clear outlier. But, in thinking about what connection to others actually is, it can't clearly be defined to just one single type of connection." That's why each individual 'Connection' package has its own concept inside. Where one reminds you to stay in touch with friends and family, others suggest making new relationships or improving your sense of belonging in the community. The same has been done for other responses, which vary from 'Purpose' to 'Structure', 'Spontaneity' to 'Calm'.

Each product can be bought from the vending machine for $2 with all profits going towards beyondblue, the Mental Health Association NSW (WayAhead) and the Schizophrenia Research Institute at NeuRA. Mark and Elizabeth are first to admit the world of marketing and advertising can promote unhealthy habits around consumerism. As Elizabeth explains, "For me, I think consumerism is habitual and almost an everyday thing. But I think much of it is mindlessly purchasing goods that help fulfil some sort of empty void in our lives." Intangible Goods aims to turn this concept upside-down by redirecting the energy put into promoting products into something positive. By providing visitors with a conversation starter and something that'll elicit an emotional response, the installation is aimed at encouraging visitors to think critically, as well as providing a way to navigate their own mindset. While the concept had long been floating around Mark and Elizabeth's heads, the nitty-gritty of Intangible Goods took almost a year to complete. Being the first major art project both Mark and Elizabeth have produced, adjusting from their largely structured professional lives to something more abstract and holistic took some getting used to. This adjustment was only made more difficult with Elizabeth working remotely from Copenhagen for the duration of 2017. But after many midnight phone calls, shared online spreadsheets, discussions with vending machine suppliers, budget lists and safety reports, the pair's hard work has finally been realised.

Working alongside Art & About Sydney and the City Of Sydney, Mark says the creative process was made easy with the freedom the duo were granted. "Everyone involved gave us license to run with our vision and helped us stick to it faithfully, which is not something we're super used to from working in the world of agencies."

Intangible Goods will be vending across Sydney CBD 24 hours a day from March 26 until April 8, 2018. Find it at Martin Place, between Pitt and George streets from March 26–29, Customs House Square from March 30 to April 3 and Pitt Street Mall from April 4–8. See full details here.