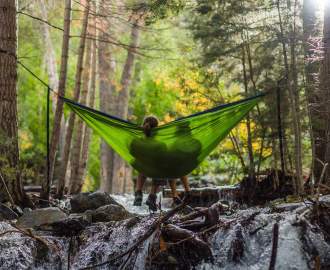 There are two major joys to a good whodunnit: the puzzle and the journey. Whichever intriguing narrative is being thrust their way, audiences want to sleuth along with the characters, piecing clues together in their heads. They want to enjoy each and every one of the story's many ins, outs, twists and turns as all the details unravel, too. The greats of the genre, both on the page and the screen, understand this. It's what made Agatha Christie the queen of suspense, and what kept viewers glued to the screen during 2019's stellar mystery flick Knives Out. The makers of The Translators get this concept as well, and embrace it heartily. In fact, writer/director Régis Roinsard (Populaire) and his co-scribes Romain Compingt and Daniel Presley go a little heavy on convoluted minutiae and attempts to keep everyone guessing, but still mostly serve up an entertaining thriller.

The Translators' premise is killer — in a film that doesn't shy away from a body count, but is actually more concerned with stolen pages from the yet-to-be-released last book in the bestselling The Man Who Did Not Want to Die series. The latest novel has only been seen by its secretive author, who refuses to reveal his identity to the world; arrogant French publisher Eric Angstrom (Lambert Wilson, The Odyssey), who made his entire fortune by releasing the first two hit instalments; and the nine translators the latter has assembled to prepare the text in multiple languages for a simultaneous worldwide debut. The enlisted team of experts are only being given 20 pages at a time, however, and they're all living and working in a lavish, highly secure, internet-free and heavily guarded underground bunker beneath a remote chateau for the duration of their two-month contract. Accordingly, when Angstrom receives an email threatening to leak the new book unless a huge ransom is paid, he's both perplexed and angry.

Fleshing out its main players isn't high among The Translators' priorities, with Angstrom a cookie-cutter publishing sleaze and his sequestered translators all fitting clearcut types. The Lisbeth Salander-esque Portuguese twenty-something Telma (Maria Leite) arouses immediate suspicion, for example, while Italian Dario (Riccardo Scarmarcio, John Wick: Chapter 2) is dashing and enigmatic, German Ingrid (Anna-Maria Sturm) is a stickler for procedure and Chinese employee Chen (Frédéric Chau) always takes a practical approach. The film attempts to be a tad more furtive about Katerina (Olga Kurylenko, The Man Who Killed Don Quixote), a Russian who purposely dresses to resemble the fated heroine in the book the group is working on, and Englishman Alex (Alex Lawther, The End of the F***ing World), who is noticeably young — but casting choices, with the two ranking among the film's most recognisable faces, already tell the audience that these characters will stand out. Including beleaguered mother Helene (Sidse Babett Knudsen, In Fabric), stuttering Spaniard Javier (Edouardo Noriega) and cynical Greek Konstantinos (Manolis Mavromatakis), The Translators treats everyone on-screen like pawns, all in service of its twisty mystery.

That's standard for the genre, though — if you're going to quickly strip a group of suspects down to their underlying motives in intriguingly heightened circumstances, it often helps if there's not too much padding on top. And while that whole tactic is glaringly apparent here, The Translators endeavours to keep proceedings humming along by zipping between new developments at a frantic pace. The movie takes time to establish its concept, naturally, and to explain everything that's relevant about the locked-in situation its titular figures find themselves in (complete with tours of gleaming subterranean pools and bowling alleys). After the groundwork has been laid, it then hurtles forward like someone furiously thumbing through an airport novel. At times, it gets a little too carried away with the exaggerated drip-fed clues, surprise reveals and reversals, but this is still a slick, swift-moving affair that ticks all the whodunnit basics. Sometimes, and usually entertainingly so, it navigates through plenty of heist flick staples as well.

As a result, The Translators is understandably a story and style-driven film rather than an actor showpiece; however Roinsard has amassed a considerable group of talent. Ensuring that a mystery's characters demand the audience's attention, even if they're little more than archetypes, is another crucial aspect of the genre — and, thanks to the convincingly slimy Wilson, the slippery Lawther and the melodramatic Kurylenko especially, that's achieved. Also generally hitting the spot while remaining as overt as possible: the movie's contemplation of art versus commerce, and of literary fandom. Nothing new is spouted or revealed, particularly given the obsessiveness that some books garner in real life, but tussling with these ideas gives the feature a bit of extra bite nonetheless. That doesn't make The Translators an overly memorable whodunnit, but that's the thing with page-turners and their filmic equivalent — if you enjoy the game and the ride enough once, it doesn't matter if you won't be clamouring for a second helping.