The Best Rooftop Bars in Melbourne

Rise above the burning concrete and escape to the echelons of summer delight.

Simply put, the best kind of bar is a rooftop bar. Drinks with a view is what Instagram was made for (not pictures of brunch, which is a common misconception). Melbourne isn't a city particularly renowned for its skyscrapers, but it sure knows how to make the most of its rooftop real estate.

Pockets of well-dressed, attractive people can be found at the top of discreet elevators and suspect flights of stairs. So rise above the burning concrete and stuffy interiors this summer and tone those thighs with some good old-fashioned stair climbing. Escape to the echelons of summer delight where a cool breeze and a chilled beverage provide the ultimate refreshment high above the steamy streets below. Here's our list of the best rooftop bars in Melbourne. After opening a new dedicated, two-storey barbecue joint on Bourke Street late last year, the Fancy Hank's BBQ crew are now serving icy cold drinks at Good Heavens, an aptly named rooftop bar that sits above the smoked meat haven. It's a slice of Palm Springs in the Melbourne CBD, with the brand new casual rooftop bar completely unlike anything the Fancy Hank's guys have done before. Think brightly-coloured cocktails and great beer. Of course, it wouldn't be a Fancy Hank's venture without barbecue snacks, with the bar menu featuring the Hank's cheeseburger and nachos with brisket mole and queso, plus fried cauliflower with vegan ranch dressing and artichoke dip for non-carnivorous patrons. She might be one of the grand old dames of Brunswick Street, but The Provincial Hotel has a new rooftop bar for summer 2017–18. The sky-high space looks set to be hot property as Melbourne's weather starts playing ball, with vintage patio furniture and shabby chic styling mingling to create an al fresco hangout as relaxed as the suburb it calls home.

The drinks offering hits all the right notes. Think easygoing, with just enough attitude, starring signature cocktails like the fruity 'You're Punching, Mate' and a new-school riff on the classic Pina Colada. They're backed by a fuss-free, ten-strong tap beer rotation and a globe-spanning wine list that's got a little something for everyone. Meanwhile, the food situation is a hands-on affair that'll see you getting stuck into burgers like The Fitzy (laced with cheese Doritos) and The Sticky Smith Street (featuring a combo of battered sausage, sticky pork and pickles). NAKED IN THE SKY

Arguably the best view in Melbourne's north, Naked in the Sky is unadulterated rooftop pleasure. Situated above the burning concrete of Brunswick Street, the view from Naked in the Sky encompasses the stepladder terraces of Fitzroy and the CBD in one direction, all the way across to Kew and Clifton Hill in the other. It's a sweeping panorama that affords the most refreshing breeze in Fitzroy. The bar is extensive and food can be ordered from the adjacent restaurant. Naked is the perfect venue to let off steam amidst a crowd at the height of Fitzroy cool. Succulents line the edges of this rooftop oasis, located above the city's favourite video bar. Elbow your way into one of the tight booth seats with a group of friends or pounce on one of the many garden tables and relax in the sunshine. In preparation for Melbourne's classic 'four seasons in a day' weather, Loop Roof is fitted with gas heaters and a large awning shielding the seats from possible downpours, making it the perfect rooftop bar for all seasons. This is the rooftop bar. And even though so many have popped up since, Rooftop Bar retains its position as the city's most popular — despite the seven flights of stairs needed to scale before you reach it. Open from 11am it is the ideal place to spend a lazy afternoon shaded by an umbrella and fanned by a sky-high breeze. In the evening, rooftop is the pinnacle of elevated recreation: drinks, dancing, views, burgers, deckchairs and cinema. Its popularity is not without merit. Its reputation, however, can often mean overcrowding and long lines for the bar. Booking a ticket for the season's Rooftop Cinema and having exclusive access after sundown is definitely the way to play it. A strong contender for Melbourne's favourite non-profit restaurant, there's now another reason to swing by Feast of Merit. With a new, cosy rooftop launched earlier this year — complete with happy hour specials and a grazing menu — the Richmond cafe-bar-restaurant is the place to drink a beer in the name of a worthy cause. And because everyone needs a nudge on hump day, drink specials include $10 espresso martinis every Wednesday night. The boutique wine list is strictly regional, with some of Australia's best homegrown wines on offer. In terms of a location, affability and atmosphere, rooftops don't come much finer than St Kilda's Uncle. Located a sandal-squelching walk away from St Kilda beach and conveniently close to Balaclava station, Uncle boasts Vietnamese dishes and some of Melbourne's best local beers. Expect mostly regional wines from the menu, including wineries from the Macedon Ranges and Mornington Peninsula.

The interior is spacious and relaxed, with pale timbers and a range of ornamental lanterns dominating the summery space. The rooftop is equally pared-back and filled with Asian greenery. For the price, you won't find a rooftop with better bang for your buck. 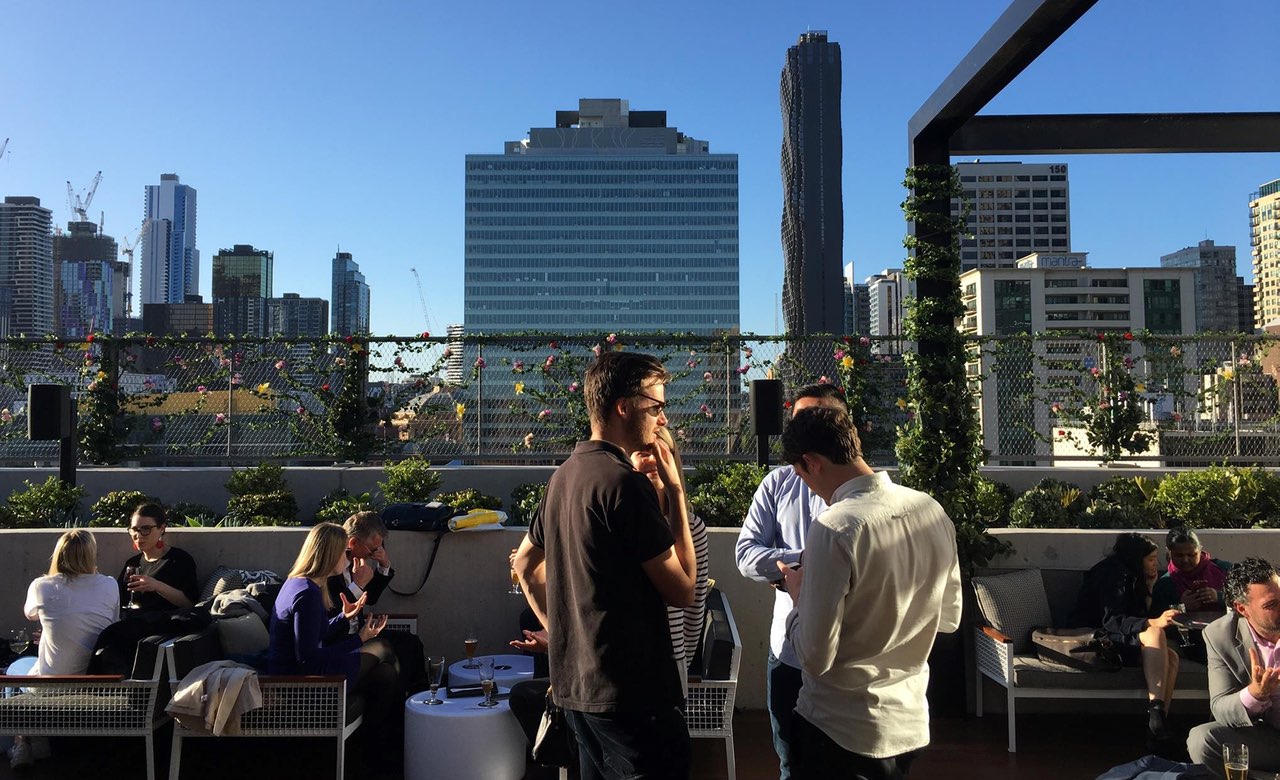 Care for a cheeky beverage looking out over Melbourne's pretty, pretty skyline? Melbourne's shiny new rooftop bar can be found atop the recently-opened QT Melbourne. This new addition to the CBD serves up beer and open-air cocktails every night of the week. To get to this high flying bar in the sky, just head to the hotel's front door and you'll be directed to the roof by staff. Best part? There's no door charge. Just know that, while the bar is open until 1am, outdoor seating will only be available until 11pm. Upside Rooftop Bar has enough of a range of quality drinks to please your whole crew. Think matcha tea with iichiko shochu and sugar shards, or beer syrup with Angostura Bitters and Japanese whiskey. The interior, made almost entirely of recycled and reclaimed wood, is easy on the eyes. Angled symmetrical tiling, exposed black brick and neon orange cushions create a sleek, modern space — perfect for a post-work tipple. 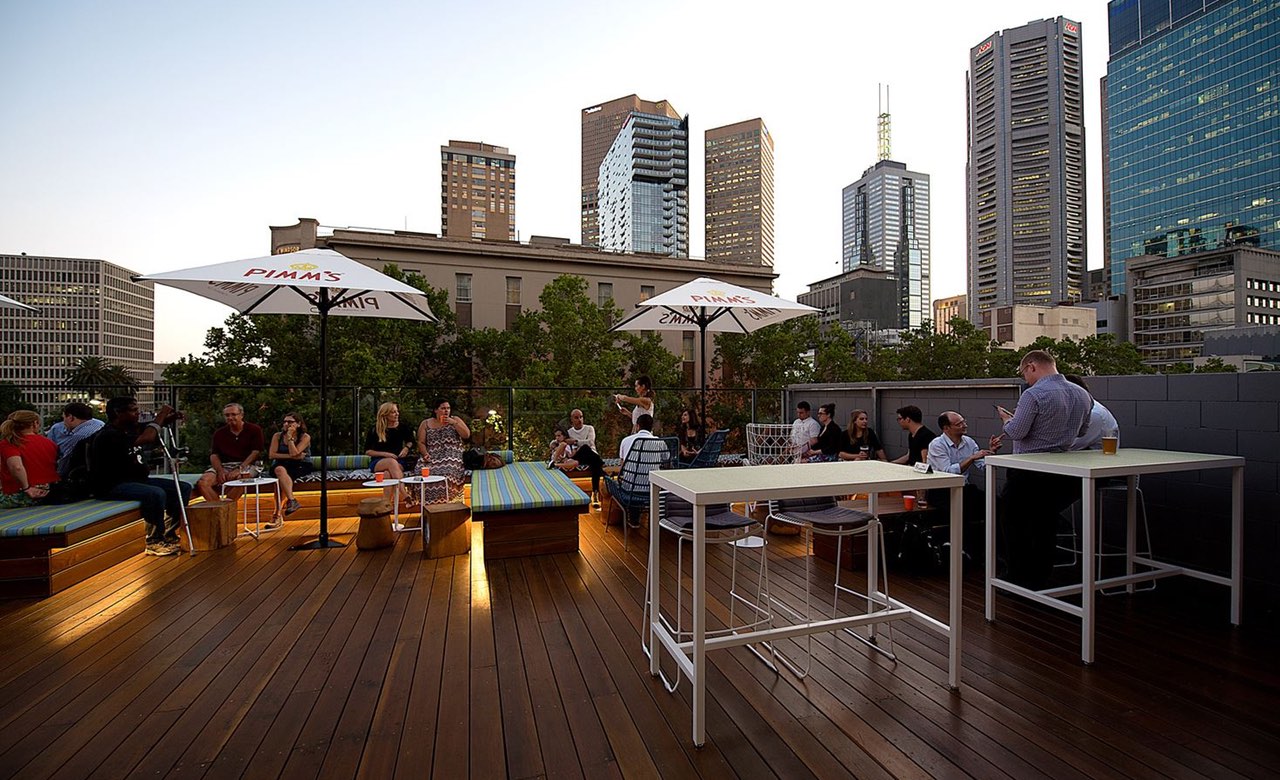 Home to one of the best view's of Melbourne's skyline, The Imperial's newly opened rooftop beer garden is modern and laid-back. Featuring bright, beachy colours and grey timber on an open-air patio, The Imperial is Melbourne's third biggest rooftop bar. With many quality beers on tap, The Imperial is the ideal sports bar slash rooftop to settle in with a cold one. The bar menu is hearty, with options including sticky chicken wings and some guaranteed-to-be-messy chilli beef nachos. Bomba has done a great job revamping into a little secluded up-high bar specialising in tasty Spanish tapas. With an exotic selection of beers, ciders, wine and vermouth, it's a smart choice for drinks amongst a crowd of attractive, well-dressed people. The clever design of the deck also closes in for winter, making it weather-proof all year round. If you thought a view framed between two graffiti-stained Melbourne trains wouldn't be half decent, Easey's is eager to prove you wrong. Gloriously grungy, Easey's rooftop yard overlooks Collingwood's local laneways from a five-storey building. It's certainly not always about your destination, but the Easey's terminal is a deliciously hot, cheesey, greasy mess. From "express" cocktails to local brews, don't skimp on your burger additions to complete your rooftop experience. Whether that involves three dim sims or triple patties is up to you. Festive and unpretentious, The Hills Rooftop Bar is everything a rooftop bar needs to be, and not a frill more. If you're on the hunt for glamour this probably isn't the rooftop bar for you, but it's the perfect place for a beverage on a warm day. Neon yellow backyard chairs, wooden shipping crates and a smattering of pillows make up most the small but efficient bar. A small television provides entertainment on nights with slow conversation too. This swanky South Yarra establishment is your best bet for rooftop beverages south of the river. With a fully retractable roof, The Emerson is a great destination all year round – and an a la carte dining option Thursday through Sunday only sweetens the deal even further. Pull up a day bed on the full-length deck with cocktail in hand and sunglasses firmly in place, and get ready to watch the sun sink slowly below the horizon. The most genteel of the lot, Siglo has the tendency to take itself too seriously, but all is forgiven for the tranquility to be found on the leafy terrace. Perched above Spring Street, the view of Parliament House glittering as the sun sets is a glorious setting for a cold brew. If you're lucky enough to acquire the wooden bench-shaped booths on the balcony, the view is uninterrupted and table service is on hand. Entry is to be found by the back steps of The European. The Carlton Hotel is home to Palmz Rooftop Bar, which is decked out with the most tropical greenery you'll find in the inner city. A combination of bougainvillea and full-sized palm trees fights the urbanity of the bar's concrete surroundings. It stands out from other bars, with tiki-style furniture and bamboo huts, making for a playful environment. The Carlton Club is known for its ability to throw a good party, so on Friday and Saturday nights they open up The Palmz to let as many people as possible flow through.