How to Make Like Nonna and Produce Your Own Salami

Step one: make sure your pig is the right gender.

How to Make Like Nonna and Produce Your Own Salami

Step one: make sure your pig is the right gender.

Each winter, inside a brick-walled suburban garage, hundreds of families brave the cold for the start of the salami season. All hands young and old, are on deck to clean and clear space, so that hundreds of kilos of meat, can be turned into neatly packed parcels of pork.

For Frank Bressi, co-owner of North Melbourne's Saluministi, this is bigger than tradition. Salumi making is an art form — an epicurean labour of love. And as anyone who grew up in and around these garages would know, these recipes have origins deeply rooted in necessity.

As Frank explains, the difference between a homemade and store-bought salami is starter culture. "All commercially made salami needs a starter culture," he says. "It's illegal to sell without it." But it's this starter culture that increases the acidity in the meat, causing it to change flavour and sometimes become tangy.

Alternatively, the people making it without the culture have had to show that their process is equal, if not more effective than what a commercial starter culture might be able to do. This process is reliant on moisture instead of acidity, and depending on the variety, homemade salami may have to reduce in weight by half before it’s safe to eat. The result is a salami with a much more complex and delicate flavour profile.

These days, homemade salami isn't an activity just for Italian families; with companies such as Home Make It selling specialist equipment to those new to the process, there's clearly a new wave of salami makers looking to try their hand at the homemade stuff. And this weekend's Melbourne Salami Festa (now in its fourth year), will be showcasing just how good homemade salami can be. The amateur salumi-making competition sees a wide range of entrants vying for the title of best salami maker — and with team Saluministi having placed in the top three two years running, we caught up with Frank to learn more about why people are so passionate about homemade salumi, and to get some tips on making your own. 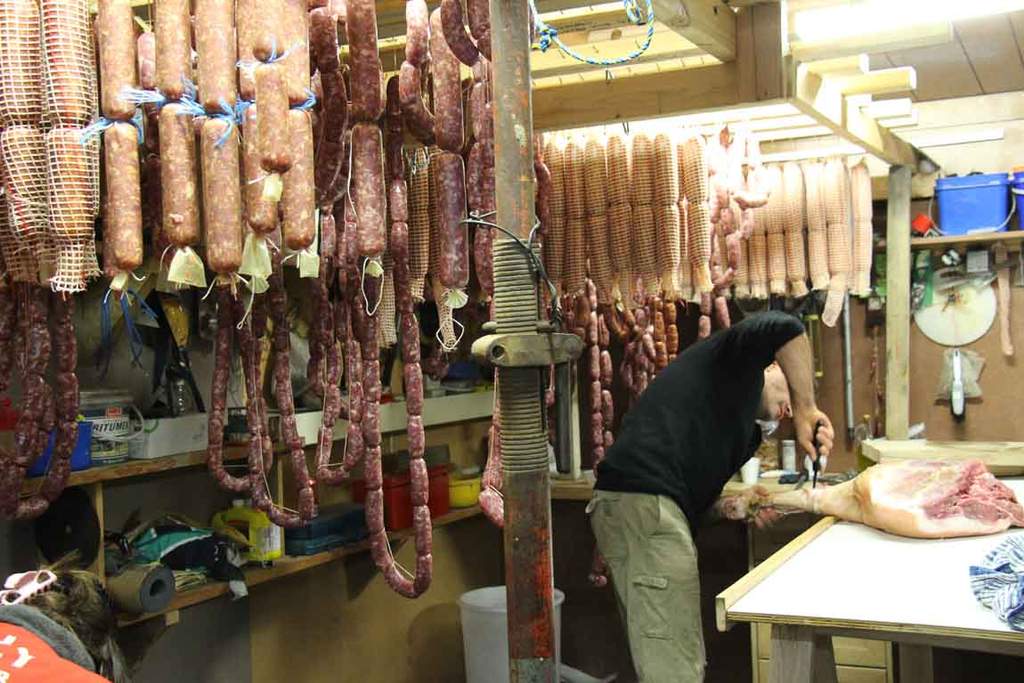 BREAKING DOWN THE PIG

In the old days, a salami would’ve never been made in isolation. A whole pig would be broken down into its different parts and used to make prosciutto, porchetta and a range of other cuts. "Everything else, all the other bits of meat and fat, were chopped up, ground and turned into salami," says Frank.

There are eight main cuts of pork used in the Italian school of curing, and each has a traditional purpose. A salami is ground meat, so it can come from any part of the pig — but female pork is a must. Male pigs will produce a 'boar' taste, which is undesirable in cured meat.

"Once you get a cut of meat, it can be hard to tell whether it's male or female," he says. "But a female pig should smell perfectly clean." If you're not game enough to tackle an entire pig, find a butcher that you trust and go from there. According to Frank it's the shoulder, due to its sweetness and good, lean meat-to-fat ratio, that's the cut of choice for many. However, it all comes down to what you like.

"Everyone has ideas about what part of the pig produces the best salami," Frank says. "But ultimately, as long as the meat is fresh, it's personal preference after that."

For the best chance of getting your salami working, Frank recommends a good mincer. But if you can't afford one, there are definitely ways around it. Mincing by hand is still an option. It's also a good idea to sterilise and wash your tools, then stick them in the freezer before you use them. That means your bowls, knives and anything else that will come into contact with the meat. They should be so cold you shouldn’t be able to touch them. You'll need gloves.

Good temperature control is what stops your salami from going bad. If you're mincing by hand, try to work quickly to limit the time the meat is out of the fridge. Although Frank has a trick: "Stack a steel bowl on top another bowl filled with ice," he says. "That way, whatever goes in is always going to stay cold until you can get it back in the fridge."

If you're serious about your salami and want to buy some proper equipment, Home Make It is a good place to start. The main ingredient in salami is salt. In fact, in the old days, salt and pepper would be nearly all you'd use. As both an ingredient, and as a core part of the curing process, it's important to use a good-quality (non-iodised) salt. You'll need to use 3% of the total weight of meat, but no more, as the salami begins to become too salty. With very fresh meat and a very clean process, lower dosages may work — but anything closer to 2.5% starts to become risky, and may not be salty enough for the salami to cure.

Popular additions include chilli flakes, paprika and red wine. Fennel is the traditional ingredient of northern Italians, while pepper sauce (a wet, capsicum-based sauce), is more popular among southerners. But that’s not to say there aren’t younger salumi makers breaking trends and blurring lines.

While the sausage casing you choose won't impart much in flavour, your choice will have an impact on the process. There are both natural casings, which come from the hog, and artificial casings, which are made of a natural collagen.

If you're hoping to make a very large-sized salami, you may have no choice but to choose an artificial casing, as hog casings lose up to anywhere between 30-50% of the weight in the curing process. Plus, artificial casings come pre-formed and pre-tied on one end — a real convenience if you're hanging several hundred kilograms of meat at a time. But if you're looking to let in more of the outside world — such as smoke or an aromatic profile from your curing room — the natural casing will absorb this better. Otherwise, stick to using them for your smaller sized salamis. Drying times will depend on your meat-to-fat ratio. For a homemade salami with a fat ratio of 20-30%, you will need to lose 30% of the total weight before it should be safe to eat. It's also dependant on the diameter of the salami, as it will take much longer for a thicker salami to cure.

So how do you keep track of the shrinking? "If you have two or three different sizes to hang: take one of each, weigh them and start a diary," Frank says. From there, monitor their progress regularly — and once your salami has reached that 30% weight loss goal, it should be safe to eat. For a firmer salami, continue drying until it's reached a 40-50% reduction in weight.

On the opposite end of the scale, 'nduja, which is a spreadable fermented sausage, only needs to lose 15-20% of its weight. Due to its 50-60% fat ratio, it requires little drying time and is normally cured in two weeks.

As a rough guide, a small, cacciatore-sized salami may take three to four weeks, while a larger salami may take six to eight. If you're still curious, book yourself into one of the salami making courses at the festival. They're being held in a pop-up garage, with DIY salami specialists Home Make It, whose Team BGS were crowned the winners of the first Salami Festa (pictured above). If stored in the right environment, a salami can last indefinitely. Frank admits that the right conditions are hard to come by, so "unless you’ve got that, or a cave in the middle of the sea, the best way around it is to vacuum pack them."

Vacuum sealing machines are relatively common and pretty affordable. By vacuum packing your salami, it can easily last for a year in the refrigerator. Unless, of course, you eat it.

For those who seek instant gratification, this year's Salami Festa will also play host to a Salumi Market and a range of pop-up food stalls. You may fill your baskets with a range of cured meats from around the country, and fill your bellies with the best of D.O.C., Ombra Salumi Bar and Frank's own baby, Saluministi. Espresso will be served by none other than St. Ali, and sweet treats will be courtesy of Gelato Messina. View the full program at the Salami Festa website.