We speak to the duo behind Poor Toms just before the much-anticipated opening of their first bar.

Before it all began, Poor Toms' Griffin Blumer and Jesse Kennedy knew a few things for sure — they had a shared hatred of fedoras, they didn't want to spend the best years of their lives working for the man and they loved drinking gin. Coming up to three years in the gin-making biz, the duo has created a well-loved, local business that's set to open its own bar by March — which we got the tiniest sneak peek of.

We've teamed up with Squarespace to talk to Griffin and Jesse about why they started Poor Toms and how they've gotten to where they are today. In 2015, the Canberran school friends lived in a sharehouse in Sydney's inner west. Jesse was working as a suit at Macquarie Bank, while Griffin was a budding actor trying to make ends meet. Both found their consumption of gin was proportional to their sense of disillusionment with spending the next 30 years living a predictable life. So, one evening over a few strong drinks, the two made the decision to kick their careers to the curb. "I was disillusioned by the idea of capitalism, and Jesse was disillusioned by the practice of it," says Griffin.

Over breakfast in one of those aggressively twee converted warehouse cafes, the duo chatted about what they would do if they could get their mitts on an equally twee warehouse space. Griffin went highbrow saying he would open a performance space and put on plays with his pals, while Jesse just thought it would be pretty cool to have a place to hang out and make gin. Fast forward a few years and (fortunately for us) it was Jesse's idea that stuck. Together the two pooled their dimes and invested in a low-key warehouse space in the backstreets of Marrickville. WHAT'S IN A NAME?

Despite not having any real professional chops when it came to the distilling process, Jesse and Griffin definitely had gumption and had sampled enough gins between them to have a clear idea of how they wanted their product to taste and how they wanted people to feel when they drank it.

They admit, coming up with a name was a rough process."It's kind of like naming a baby, at first any name sounds bad but eventually people will accept it," says Griffin. They knew they wanted to include 'Tom' in their gin baby's name, as (adorably) it's both of their middle names. Serendipitously, Griffin was doing a reading of King Lear with Bell Shakespeare at the time, and, on the hunt for literally any 'Tom'-themed words, he came across the character Edgar, a kind of clueless aristocrat who — in a very small nutshell — was forced to cast off his riches and disguise himself as the charming philosophical vagrant Poor Tom in order to avoid being falsely accused of plotting to kill his father.

The act of throwing off your fakery and pretension to reveal one's trueself became a guiding principle that informed Poor Toms creative direction and brand ethos, "most marketing advice is 'make something with broad appeal or something that is generically interesting to a lot people'" says Griffin, "but we decided to take the opposite approach by making something that appeals to us… and hoped other people would like it." HOW TO BECOME LEGIT

Regardless of what you think of Mark Zuckerberg and his social network conglomerate, any business operating in this day and age needs to have some semblance of an internet presence. Before starting Poor Toms, both Jesse and Griffin used social media like any average millennial — "to look at people and not miss parties" — but, despite their shared hatred of photos of drinks on Instagram, they knew if they wanted Poor Toms to be successful they needed to up their online ante.

"One of the hard parts was translating the very clear brand identity into an online voice...all of a sudden we had to have a social media presence and a website," says Griffin. "These days, having a website is like having a business card…you need one to be trusted."

The two had been binge-listening StartUp, a podcast about starting a business, and as a result, were exposed to a world of audio ads from Squarespace. They elicited the help of a designer friend to whip up a schmick website using a Squarespace template, and started an Instagram account, which, according to Jesse, was "largely to demonstrate that they were normal enough that other people would take photos with them" and with that, Poor Toms became legit. 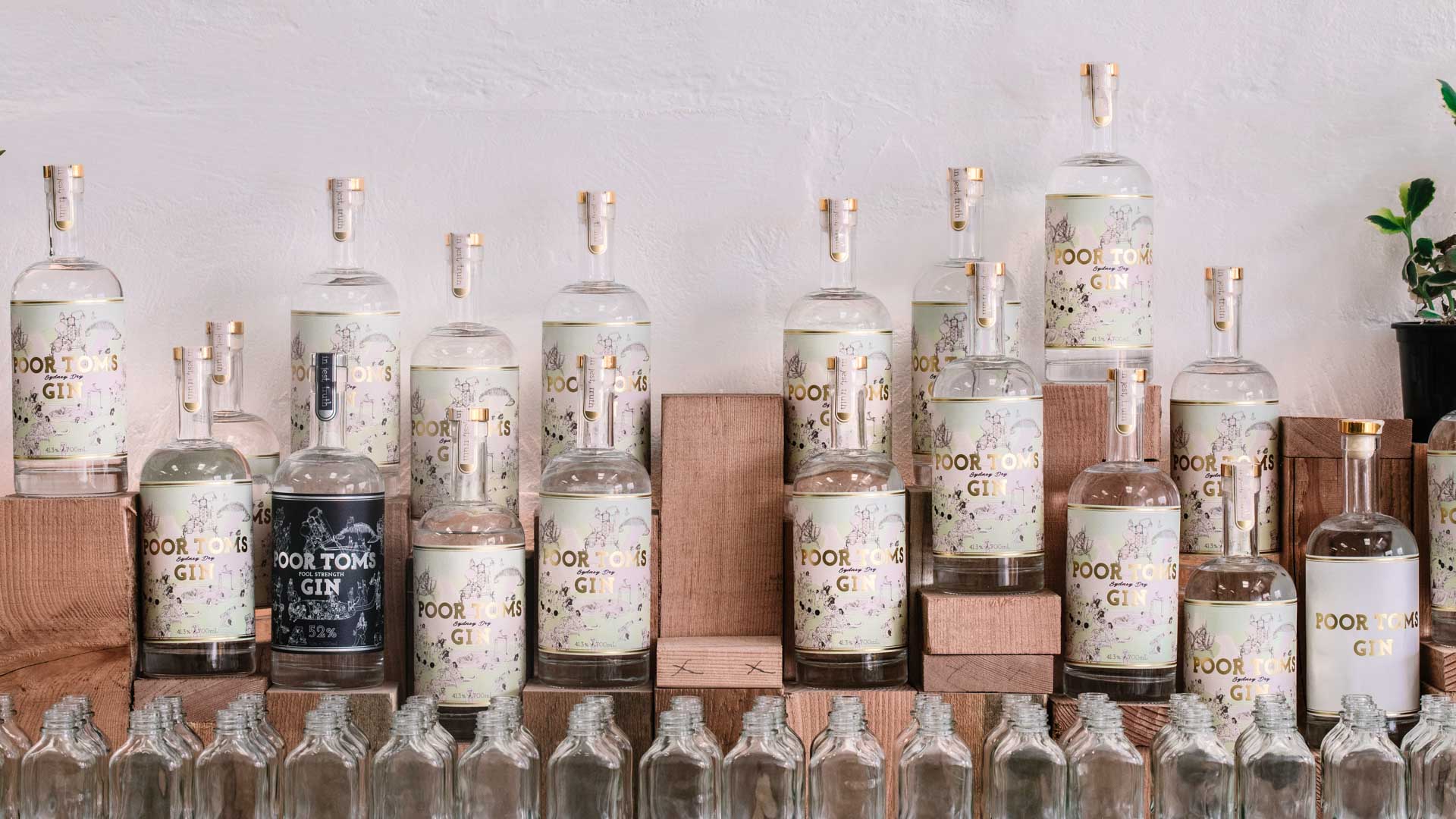 THE MARKER OF SUCCESS IS NEVER FIXED

As Poor Toms continues to grow as a business, the definition of success constantly evolves. There wasn't really an exact moment when the pair knew they made it, but they're now producing grade-A gin on a full-time basis, and don't even have to think about returning to those 9–5 jobs that they left behind. Though there's not a lot of time for them to pause and reflect, "you become addicted to the hustle," says Jesse. "There's so much hustle involved in stepping away from a consistent salary."

They're busy working on a number of new projects and collaborations including opening a bar in their Marrickville distillery in Sydney, "we weren't ready to open a bar when we first started. We just weren't old enough," says Jesse. "It took six months to figure out how to make gin, and now we're finally ready to have people here."

For Jesse and Griffin, starting Poor Toms was never about making bank; the pair is just happy to be working for themselves and producing something they're truly passionate about. "We created something new that people love," says Griffin. "We always wanted our gin to be loved — it's not about revenue or profit. We want to be Australia's most loved gin; we want people to be invested in our story."

Discover more of the Poor Toms story here, and stay tuned for more news on the launch of their first bar.

Looking to embark on an entirely new venture? You'll need to let people know about it. That's where Squarespace comes in. Kickstart your new biz with a website, and use the code CP for 10% off your first Squarespace purchase.

Published on February 16, 2018 by Kara Jensen-Mackinnon