An Out-of-Towner's Guide to Sydney During Vivid

What to eat, drink, see and do during the festival of light, music and ideas. 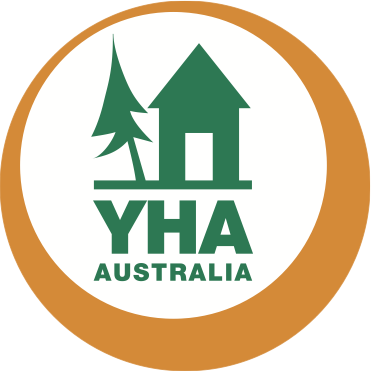 Each winter Vivid draws Sydney out of hibernation with a festival of light installations, talks, workshops and performances. Now in its tenth year, the festival is bigger and brighter than ever. From the illumination of major city landmarks to international acts and challenging ideas, there's a lot to pack into the 23 nights. With the help of our friends at YHA Australia, we've put together a rundown to help you navigate the festival. From what to see and do and to where best to eat and drink. With so much to see and do during Vivid, you'll want to be close to the action. Sydney Harbour YHA in The Rocks is the perfect home base; it's just a stone's throw away from the installations in The Rocks and walking distance to Circular Quay and the Botanic Gardens. It's also right in the thick of some of the most historic pubs in Sydney.

The building combines modern comfort with the heritage of the area — it's set above archaeological remains of colonial Sydney. Choose from private or dorm rooms and head to the rooftop balcony to treat yourself to one of the best views in Sydney. From this bird's eye vantage point, you'll have an uninterrupted view stretching from the Harbour Bridge to the Sydney Opera House, Customs House and city buildings, all lit up for the festival. Grab a drink and settle in to soak it all up.

If you'd prefer to stay a touch further away from the heaving Circular Quay, YHA also has locations in Sydney Central and Railway Square. Here, you'll be in walking distance of Haymarket (and its many dumplings, noodles and 30c cream puffs), Spice Alley and Darling Harbour's stunning light installations. All three YHAs are offering 20-percent-off during Vivid, too. You'll need to keep your energy levels up in order to fit in everything in during the festival. Luckily, there are heaps of great food options around. Start the day with quality coffee and a beautiful, picturesque breakfast at The Grounds of the City. If you're short on time, though, you can grab a cup of joe and a brekkie burger, bowl or muffin from the takeaway window. For lunchtime refuelling, head to La Renaissance Patisserie for house-made pies, baguette sandwiches and pastries. The tree covered courtyard is a sweet little place to retreat from the crowds for a little while. In The Rocks Centre behind Kendall Lane, you'll also find the Fine Food Store serving up sandwiches, salads and winter warmers like soups and stews. When the sun goes down, check out the new Bar Patrón by Rockpool for authentic Mexican eats, margaritas and views of the Vivid lights. Alternatively, head to The Morrison, located between The Rocks and Wynyard, for a mean sirloin steak or the $1 oyster happy hour from 6–7pm each Wednesday. And if you've really got cash to splash and a burning desire for views with some top eats, head to Cafe Sydney. Found above Customs House (which will be covered in a Snugglepot and Cuddlepie light show), this place serves up Australian haute-cuisine with a killer view. The restaurant also has a dedicated vegan menu for those looking for some fine dining that considers their dietaries. For another prime spot with more casual eats, head next door to Gateway — home to Neil Perry's Burger Project, Din Tai Fung, Four Frogs Creperie and Gelato Messina. 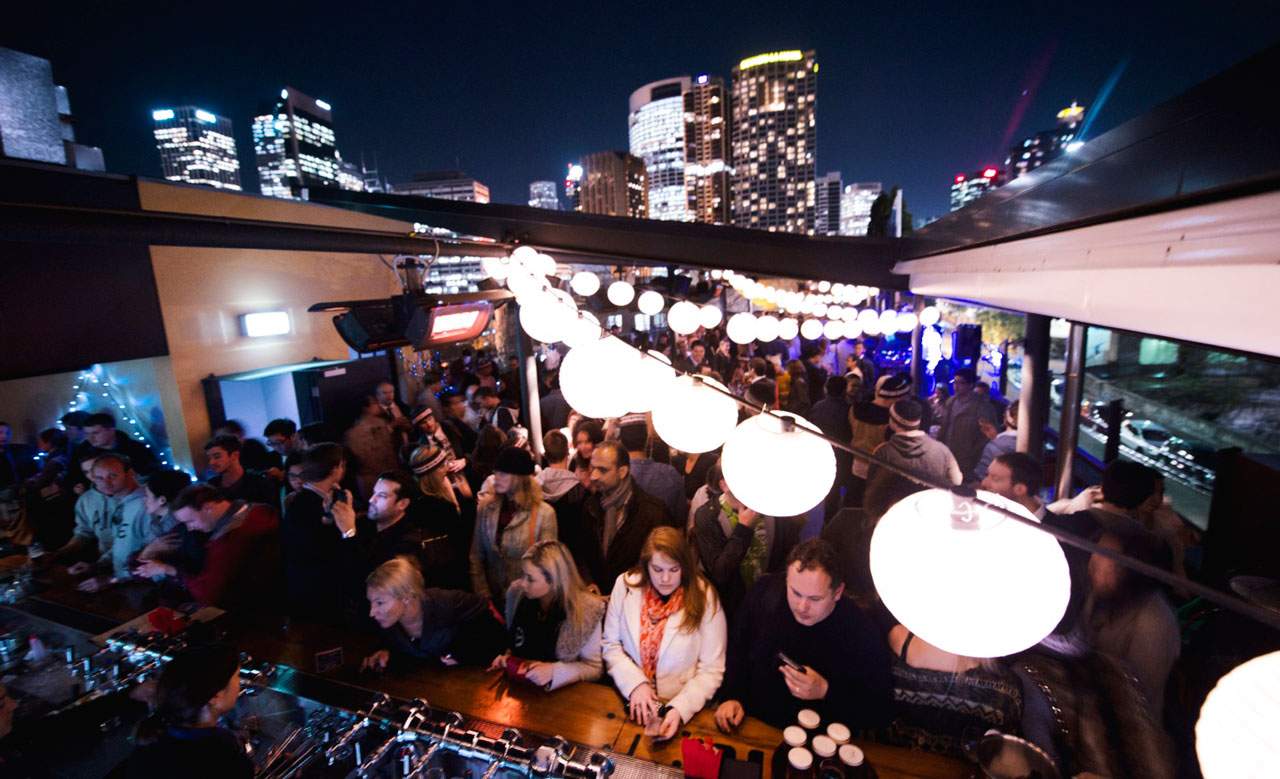 The Rocks area is heaving with pubs — in fact, two of them, The Lord Nelson and The Fortune of War, lay claim to being Sydney's oldest. The best way to fit them all in is to head on a pub crawl — starting at The Lord Nelson, making tracks to the potentially haunted Hero of Waterloo, heading up to The Glenmore rooftop for excellent harbour views, passing by The Fortune of War and finishing up at the newly refurbished Orient. If you're after something more sedate and refined, hit Henry Deane, the rooftop bar at Hotel Palisade which boasts incredible views of the harbour and the lights of Vivid. Otherwise, check out Bulletin Place for intricately crafted cocktails, or cosy up at The Doss House, a new underground whisky bar set in an incredible heritage building in The Rocks. 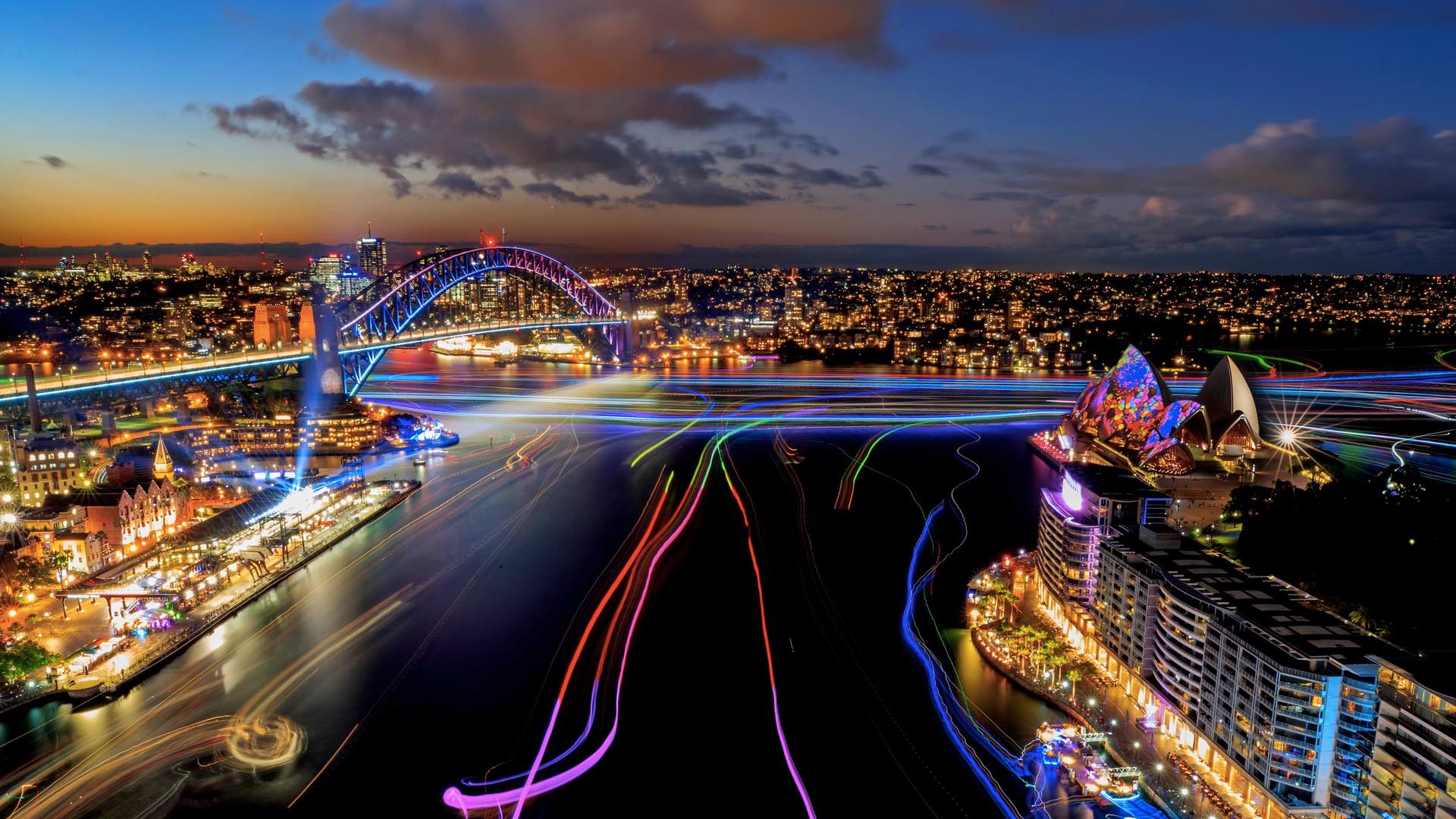 The projections onto the Sydney Opera House have been the crowning glory of the Vivid light display since the festival's inception. This year the sails will feature the work of artist Jonathan Zawada, blending everyday objects with the pictures inspired by the Australian environment. Meanwhile, Skylark makes use of the high rises around Circular Quay, featuring a custom-built laser atop the Harbour Bridge projecting onto buildings in a stunning light show every half hour. The Southern Pylon of the bridge will be lit with Bangarra Dance Company's Dark Emu, melding dance and art and paying homage to the agricultural knowledge of Indigenous Australians. 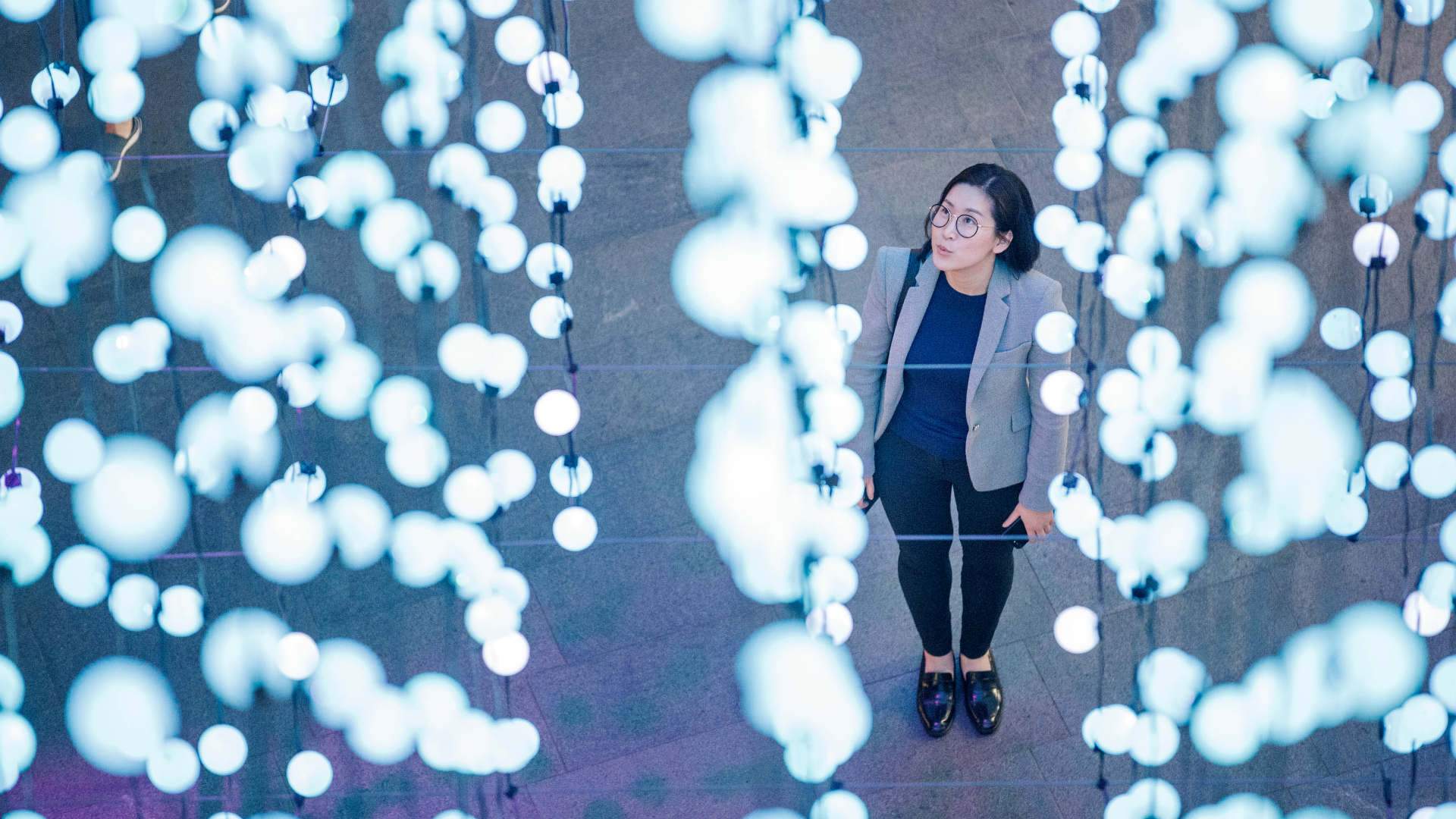 See bacteria writ large at Beautiful and Dangerous in The Rocks. The work takes you under a neon microscope to explore some of the deadliest diseases facing mankind and what's being done to curb them. While you're in the area, look skyward and see A Little Birdie Told Me — a work depicting the threat to many of our native bird species.

The festival of light also makes full use of the glorious Botanic Gardens, with installations dotted throughout. Impressions shows a time-lapse of flora captured from the garden throughout the day, displayed across five huge canvases. Check out The Bloom, a giant metallic flower covered in LED pixels. And hanging in a canopy of trees is Hyperweb, a giant web combining light and soundscape. With so many artists and thinkers in town, you might want to extend your stay to fit more in. Top of the ticket is Solange, performing at the Sydney Opera House. Her shows are sold out, but festival organisers recommend checking the website daily for last-minute releases. Also in town are Grammy award-winning singer St Vincent and legendary rapper Ice Cube. There are heaps of local acts to check out too, including No Mono, Middle Kids and Stonefield. For one night only Heaps Gay will host a fabulous, not-to-be-missed fancy dress party, Qweens Ball, at Town Hall. Plus for a change of pace, this year's festival also includes a jazz series for the first time. Vivid Ideas will get your mind bubbling about the big issues. There are talks on everything from building a sustainable future and the threat to democracy to the art of creativity and understanding consciousness. For podcast nerds, the Audiocraft Podcast Festival features a line-up of industry heavyweights in a series of talks and workshops.

If you're headed to Vivid this year, YHA is offering 20% off stays for Concrete Playground readers during the festival. The offer applies to all rooms (private and multi-share) at Sydney Harbour YHA, Sydney Central YHA and Railway Square YHA. Use the code VIVID to claim the discount when you book online, valid Sunday to Thursday between Sunday, May 27 and Friday, June 15. More info about the offer and other weekend discounts here.