“You wanna hear a story? It’s kind of long, but it’s full of suspense.”

In Zola, the swooshes and whistles have it: when a character utters a line of dialogue taken directly from the movie's famous 148-tweet source material, filmmaker Janicza Bravo pairs it with the right noise. That's one way that the second-time filmmaker tackles the formidable task that is adapting a lengthy social media thread into a feature. And she wasn't working with any old tweetstorm; when Aziah 'Zola' King let her fingers do the talking back in October 2015, it trended under the hashtag #TheStory.

Charting a gal-pal getaway to Florida that swerved from exotic dancing to sex trafficking, crime and violence, King's Twitter thread had social media users hanging on its every word. Six years later, it remains an iconic piece of internet history — King deleted it swiftly, but nothing ever truly disappears in the online world. The challenge for Bravo in turning those posts into Zola: remaining true not only to King's rollercoaster ride of a tale, but also to the entire reason that everyone knows about it.

Cue those telltale sounds, which keep Zola's origins firmly in viewers' minds. Cue a big swerve away from text on-screen, too, because a story this wild deserves an in-the-moment approach that plastering a phone screen across the big screen just can't evoke. And, cue a brilliant urination scene that instantly tells the world everything it needs to about the titular Detroit waitress (played by Taylour Paige, Ma Rainey's Black Bottom) and the fellow dancer, named Stefani here (Riley Keough, The Lodge), who invites her on the road trip to end all road trips.

When it debuted at Sundance in 2020, Zola became one of the buzziest premieres of the festival. Due to the pandemic, it has taken more than 18 months for the movie to make it to Australian cinemas, but its candy-hued, neon-lit, dreamy-meets-dazzling glow hasn't dimmed. With Zola now showing locally, we chatted to Bravo about those tweets, getting the gig over James Franco and, yes, that glorious pissing scene.

"YOU WANNA HEAR A STORY? IT'S KIND OF LONG, BUT IT'S FULL OF SUSPENSE."

One tweet, 22 words, one helluva impact: that's how King's Twitter thread started. Its first two sentences couldn't set the scene better: "You wanna hear a story about how me and this bitch fell out? It's kind of long, but it's full of suspense."

Bravo didn't read those words as they were tweeted but, when she did, she knew that she had to turn them into a film. "At this point, I hadn't even made a first movie, but I've decided this will be my second movie — and I'm glad I was right," she explains.

"I'm not Twitter and I wasn't on Twitter — lucky me. It's just not for me. I think it's super valuable and there's a lot of deliciousness that I've gotten from that space, but overall it's not a vibe for me," Bravo notes.

"So I read it on Twitter at the end of that day. It was up for about 24 hours before she deleted it. I didn't get to participate in the live experience, meaning I didn't get to see her writing and responding and the sort of subtweet thing that happens inside of it or the reposts. I didn't get to see all that. But I got to sit with it right after, and it was radical. I knew right away that it was going to be my second movie." THE TWEETSTORM THAT HAD HOLLYWOOD TALKING

When a Twitter thread gets this much attention, everyone wants in. Bravo wasn't originally the only filmmaker inspired to bring King's story to the screen — didn't originally get the job.

"I go after it right then. I'm nodding when I'm reading it, and I'm sending it to both my agent and my manager and saying that I want this," she says. "I don't know how Twitter IP works, but I really want to make this. They get back to me three days later and say there is a Rolling Stone article, and then there's her life rights, and that's an entry point into being able to have access to the story."

"And so I go 'yes, put me in!'. To which they reply that of the five people going after it, three of them are studios and two of them are independently wealthy. And I was like, 'well, I have no cash, so I'm not making the shortlist'.

Clearly, that isn't the end of the story. "I find out a year later, though, that Killer Films — that I'd made Lemon [Bravo's first feature] and a short film with — were one of the producers were on it. And, James Franco was directing it," Bravo advises.

"So I just wrote them and was like, 'hey' — because I understand how things work, and sometimes a director is no longer on a project. I was like 'if for some reason James is not directing this, remember me, think of me'. Then I found out in the spring of 2017 from an actress who was friendly with him that he was no longer directing it, so I reached out to my reps again and was like 'I want this'. And then I got it." THE BIG QUESTION: HOW TO ADAPT 148 TWEETS INTO A MOVIE?

Peppered with emojis and all-caps, King's tweets don't simply describe a wild ride — they take readers on one. Bringing them to the screen put Bravo in uncharted territory but, writing Zola's script with playwright Jeremy O Harris, she didn't see it that way.

"And this, for me, I felt it had so much more in some ways. I printed the tweets, cut them out, put them into a first act, a second act, a third act… and not only was there the outline, but the dialogue was in the outline," Bravo notes. "For me. it felt pretty seamless."

"I think the thing that becomes curious, that allowed myself some room to explore, is okay, so there's a road trip to Detroit to Florida, from home to Florida, that is a 19–20-hour drive. That's only one tweet. Now does that become one scene, or three scenes, or five scenes, and how do you tell the story of that drive? Multiple tweets can be in a scene, or some can just be standalone, or one can be five — and figuring out the math on that, that's a part of writing, that's part of drafting." 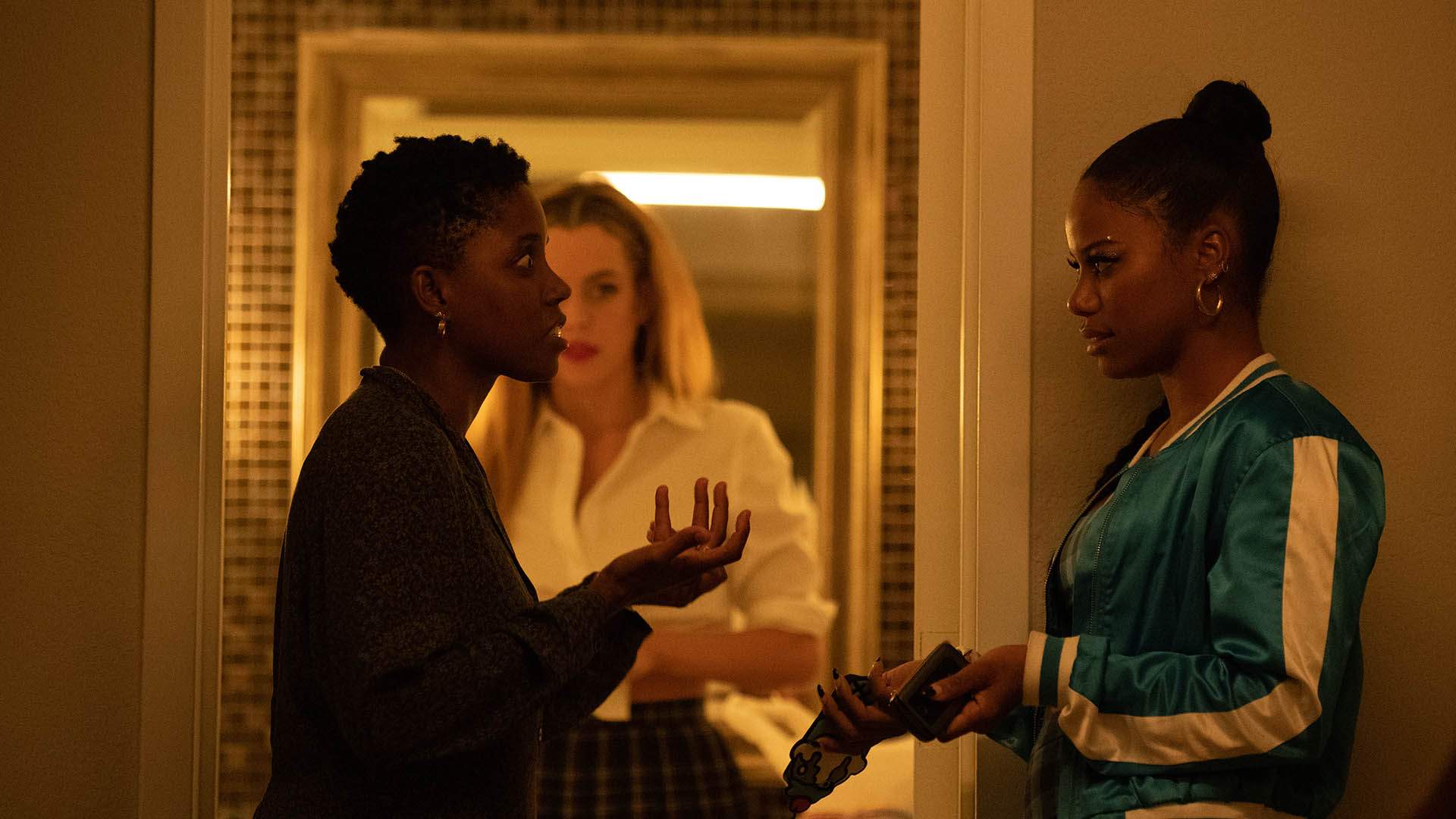 As evocative as #TheStory is to read — as gripping and addictive, too — it didn't cover everything that Bravo envisaged for the film. Enter the bathroom scene. "I would happily talk about it forever. It's one of my favourites in the film," Bravo says.

"When I was auditioning for the movie, I had come to the table with a handful of things I wanted to try that were not in the film. And then when it came to writing, once I get it and I'm writing with Jeremy, one of our first assignments is what are the five things you definitely want to make sure arrive in this script, and what are these three ideas outside of the world that you want to bring to this?"

"And for me, one of those ideas, I just really want this piss scene. I've been thinking about wanting to put something like this in my work for a while. And this is a film about this love story between these two women — this seduction that happens between these two women — how they fall in love and out of love, and I couldn't recall being able to have a window into a character like this without there being a good deal of dialogue to tell me who they were. So I had this idea about a bathroom scene in which you got to see the interior of each of those characters," Bravo explains.

"The audience can always go back to that as to who is reliable or not reliable — or who's hydrated or not hydrated, basically. It's meant to be so much about who they are. How they treat themselves in the bathroom is how they move through the world. And I know it seems kind of small, but I thought it did that."