Ten Amazing Glass Greenhouses from Around the World

They're pretty common in Europe, where harsh winters prevent many southern hemisphere plants from thriving, nearly every botanical garden boasts a glasshouse full of exotic species. But Australia doesn't get too many chances at glass glory. If you're in the market for a round the world trip full of steamy glass greenhouses, or if you're looking for inspiration for your indoor garden, check out ten of the best and biggest greenhouses from around the world. The Kew Conservatory is one of the most well known greenhouses in the world. Established in 1987 by Princess Diana and housing over 30,000 plant species, the conservatory is designed to be energy efficient and uses some passive heating and cooling design techniques to moderate each climatic area. In one of the glasshouses, you'll find giant water lilies that span over two metres and a basement level that gives you a view of the underbelly of the pond. However, you can only visit the glasshouse by purchasing a ticket for the Kew Gardens at large, so we recommend heading over in the spring or summer to soak up as much quaint English garden as you can possibly stand. The Palmenhaus Schonbrunn in Vienna is a glasshouse built in the garden of the royal palace of Schonbrunn. It bucked the dainty white trend to be built with a dusky green steel and, like many glasshouses built before WWII, it's had a long and colourful history. Palmenhaus was partially destroyed in 1945 when the palace was heavily firebombed, but has since rebuilt — and has grown its herbarium to one of the most prestigious in the world. Among the planned chaos of the overgrown garden, you'll find oldest plant in the world, an olive tree donated by Spain in 1974, is estimated to be roughly 350 years old. In the Kaisaniemi Botanic Gardens in Helsinki sit three plump glasshouses laced with white. They're laid out in a more rambling fashion than traditional greenhouses, with quaint benches and tables scattered throughout, and are used as much as an education facility as a peaceful retreat from chilly Helsinki. The rooms are organised by plant variety and the most striking include the Asian waterlily rooms (think water lilies the size of a picnic rug), the desert room and atmospheric rainforest room. In the 1800s, advancements in construction techniques made the greenhouse, a building that's pretty much just a stack of delicate glass panes, possible. Many greenhouses that were built around that time followed the popular art nouveau style of looking like a glorious wedding cake — and those built on the grounds of Laeken, the Belgium royal castle, were no exception. The greenhouses were untouched during WWII and retain most of their original collections, however they're only open to the public for three weeks during the spring, which makes them all the more mysterious. New York Botanical Garden's pretty greenhouse is named after Enid Anneberg Haupt, who donated US$10 million in 1978 to save and restore the old conservatory. The conservatory (which is just a fancy way of saying greenhouse, don't be fooled) specialises in unique exhibitions for gardeners who really know what they're doing, including orchid shows (with vertical walls lush with orchids), the flora of the Japanese garden, recreations of Monet's gardens, wild medicine gardens and edible gardens. You'll also find greenhouse mainstays, such as a hot desert room and a steamy tropical rainforest room to get lost in. The Eden Project is technically not made of glass, but it's definitely earned a place on this list for its sustainable (and stunning) design and eco-friendly initiatives. It was built in 2000 on a disused kaolinite pit, near the town of St Blazey in Cornwall, after the pit reached the end of its life. The structure consists of multiple linked geodesic biomes that house the largest rainforest in captivity and a rambling garden that cascades down the edges of the pit. An education centre was built in 2005 that includes classrooms and exhibitions to educate visitors about sustainability — the central message of the Eden Project. And in winter, the tropical biome is probably the warmest place in the UK and stuffed full of rare carnivorous plants. It's fitting that some of the oldest and prettiest greenhouses are found in Paris. The three greenhouses in the Jardin des Plantes are almost as lovely as the plants they house and are but one element that make up the rich and rambling garden. They were built in the art deco style (similar to the Paris metro stations) and house exotic plants from around the world, including desert plants, tropical plants from New Caledonia, and a greenhouse that tracks the evolution and history of plant life across the planet. If you want to get immersed in greenhouse culture, the Botanical Garden in Copenhagen is your best value for money. Entry to the gardens is free and they have 27 greenhouses (although some aren't open to the public) scattered throughout the gardens that cover every type of plant you could imagine. Put Greenhouse #12 on your list, as it's dedicated to rare and endangered species of plants from idiosyncratic climates, such as Madagascar, the Galapagos Islands and the Mascarenes (which you will likely never see in the wild). Also Greenhouse #10, the succulent and cacti room, to get inspiration for your own succulent garden back home. 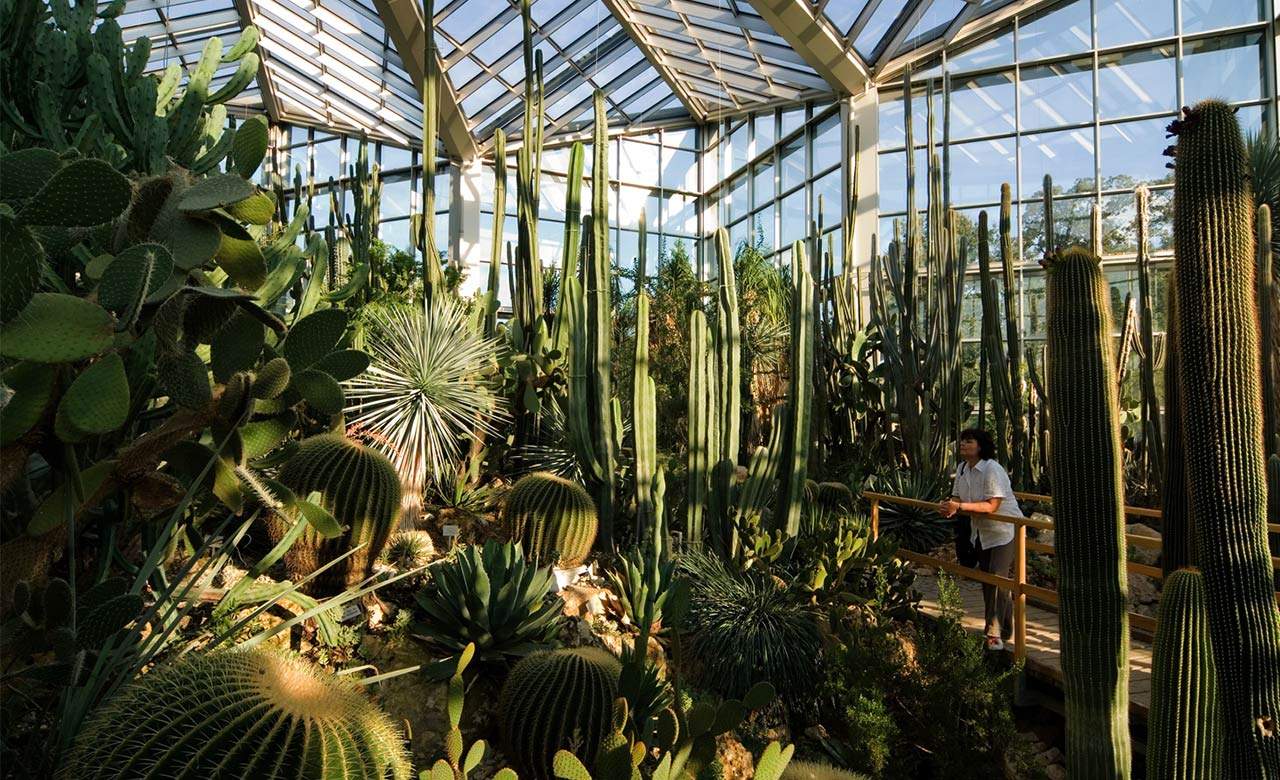 THE TROPICARIUM IN FRANKFURT'S BOTANICAL GARDEN

Germany experiences some achingly cold winters, so it's no wonder the vast majority of their gardens are safely cultivated inside greenhouses. Some of the most glorious of these can be found in the Palmengarten Botanical Gardens in Frankfurt. The Palmengarten is a 22 hectare botanical garden (the largest in the country) that's been open for over 140 years. The Tropicarium and the Palmenhaus (two weird names you won't forget in a hurry) both house tropical plants and cacti from warmer parts of the world inside beautiful architectural halls designed by Friedrich Von Thiersch in 1868. Like all the greenhouses built in the 1800s, it's a visual smorgasbord of greenery punctuated by delicate lattice work  and flowery sconces. The Tropical Dome in Brisbane's Mt Cootha Botanical gardens may not be as large or as fancy as the greenhouses of the northern hemisphere. Hell, it might not even be necessary for a sub-tropical city that is constantly humid to build a tropical dome that's even more humid. But people do love it. The bold geodesic dome pattern encloses a lush, if small, forest and pond and makes the perfect photo op. On the rolling landscape around the dome, you'll find a wide array of cacti and succulents (no greenhouse necessary to keep them alive, thank you very much) that look and feel like a tacky Western movie set. It's plant heaven and entry to the gardens is free all year.