The Five Best Barbers in Wellington

Whatever vibe appeals to you most, you can rest assured you’re in expert hands with any one of Wellington’s finest.

The modern gentleman probably needs no introduction to the resurgence of the barbershop. Directly countering the stuffy swank of the salon environment, overtly masculine spins on the classic parlour continue to pop up at increasing frequencies. Simply picking a number for the clippers doesn't quite cut it anymore; your barber needs to know his skin fade from his taper, and the environment in which he cuts is likely an impeccably curated reflection of his pulse for all things gentlemanly. And getting a trim isn't just a monthly errand, but a sought after experience.

Working alongside LYNX Black on compiling our dossier for the gentleman's life in Wellington, we have found five barbershops listed below which all reflect a distinct atmosphere to cater for all genres of modern male. An offshoot from the esteemed Courtenay Barbers, Cuba Barbers is your quintessential parlour of relaxed vibes and quality chat. There's no discrimination here; women are welcome, and the customer demographic seems to be as broadly aged as the experienced team wielding the scissors. These guys cut hair, and without a whiff of pretension. Fronted by an open seating area and a characteristically eclectic ensemble of paraphernalia, you could hardly feel more welcome getting a trim in your mate's living room. The owner, Michael, is a muso too so it's not uncommon for his melodically inclined cohorts to pop in (Barnaby Weir was among the friendly foot-traffic during my visit.) The spot has only been open for twelve weeks, but after sampling their easy-going spirit, you could easily assume they've been there forever. Tucked away in the melting pot of Cuba's Leftbank, Carve have quickly established a devoted following for immaculate cuts. Working the formula of beer, beats and banter down to a fine art, Carve have that communal quality so integral to a classic barbershop; whether you're under the clippers or thrashing the X-Box while you wait, you're as much a part of the conversation as you feel like. While the staff are always keen for a laugh, that affability shouldn't belie how masterful and attentive these guys are at their discipline; I can't remember the last time I've had such a precisely measured taper (or such a refreshing hot towel finish.) The store is less cluttered with knick-knacks than many of its counterparts, but what does cover the minimal wall-space is certainly fitting; a row of posters celebrating masters of their respective crafts: Jackson, Marley, Hendrix, and finally, a Carve barber. While melding the modern with the classic has become a popular trope for the contemporary barbershop, few outfits inhabit that space with the authenticity of The Godfather Barbers. Persuasively steeped in '50's furniture and décor, the shop is a hospitable mesh of vintage charm and current conveniences; waiting patrons can help themselves to coffee or tea (from antique sets, no less) and wi-fi access. The influence of the titular Mario Puzo masterpiece is affectionately employed here too, with all the barbers sporting slick monikers like 'The Don' (that's owner Rodrigo Ballaminut), 'The Capo' and 'The Consigliere' - not to mention the framed portrait of the original Don Corleone presiding over your shave. Now would probably be an overly obvious moment to insert a lazy nod to 'an offer that you couldn't refuse', but glancing at the sharp fades and fine shaves Ballaminut's team provide for genuinely comfortable prices sets it up irresistibly. The granddaddy of Wellington barbers, Norris Barbers have been purveying sophisticated grooming well before it was on-trend to do so. Already boasting a decade of experience under his belt and a keen attentiveness to the demands of the modern male, Chris Norris opened his doors back in 1992 under the motive of providing no-fuss cuts for men, but with a hairdresser's standard for craft. Norris Barbers now has two locations, with a third on the way. Their stores are clean and minimalist - furnished in open whites and warmly-toned woods - and have a relaxed, low-key feel. But every spot also has Chris's proficiency as a craftsman, usually in the form of his intricate model sailboats or restored motorcycles. Of course, if you really want proof of what he can do with his hands, just check the newly furnished follicles of whichever patron he serviced last. 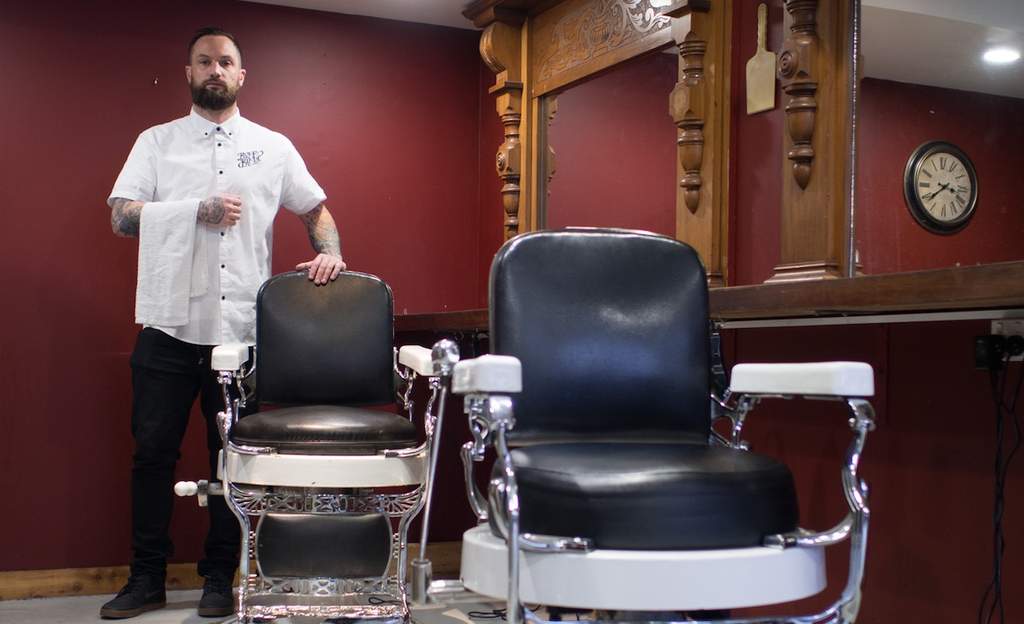 1. The Boar and Blade

Nestled in Wellington's secluded Egmont Street, The Boar & Blade has swiftly become something of an institution since opening its doors in 2013. Their savvy amalgamation of mid-20th century atmosphere and contemporary cool have made them the go-to for the aspiring gentleman - not even mentioning the revered reputation for slick cuts, cut throat shaves and meticulous beard maintenance. With the eponymous and infamous pig's head mounted above the entrance (ask the store founder Bundy about it), the space is classic man-cave porn, replete with wood-carved service areas and a treasure trove of distinctly masculine artefacts. The area is tight, so booking is recommended, but if you're after a genuine experience as much as you are superlative grooming, look no further.

For more articles like this one, come this way for the LYNX Black Gentleman's Guide to Wellington.