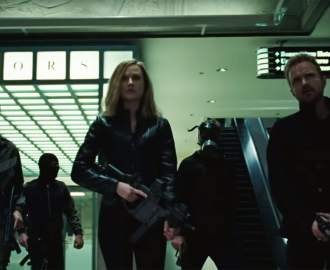 Win a Nick Von K 'No Time to Waste' Watch

This limited edition Skull watch up for grabs is inscribed with the saying " No Time To Waste" - sooner or later we all face the reaper and life is all about making the most of every day we have.

Win a Nick Von K 'No Time to Waste' Watch

This limited edition Skull watch up for grabs is inscribed with the saying " No Time To Waste" - sooner or later we all face the reaper and life is all about making the most of every day we have.

Local jewellery designing legend Nick von K is known for creating pieces with an edge. A fan favourite at New Zealand Fashion Week, and just as loved worldwide, Nick von K designs have been seen embellishing the limbs of Paris Hilton, Steve Aoki through to Queen Gaga herself. We had a chat with the man about Nick von K the person, the brand, and where it's all going next.

And thanks to Tiger Beer, we have a Nick Von K watch to give away. Head to Fortune Avenue to go in the draw. Competition closes July 20, 2015. CP: So where did Nick von K come from?

NvK: Basically, I went to university, decided it wasn't for me, dropped out and started painting, doing sculpture, playing music, all those sorts of things. But it didn't take me long to realise I couldn't make enough money doing any of that. It wasn't one of those things where I wanted to be a jeweller from when I was a kid. But I did always want to make stuff. I spent my entire childhood making things. And as a teenager I got into wearing jewellery. I was always buying all that cheap rock n' roll stuff on Queen Street, it would break and then I'd buy some more. So yeah, I've always loved it. Turns out it's a really perfect job for me, I love fashion and design and jewellery, I love making things and travelling… and I get to do all of that. When I found that it was something people were willing to spend money on, and I was turning a profit with my jewellery designs I sort of just stuck with it and it evolved from there.

NvK: Not at first. At first I was just making what sold. I was working with shops and clothing brands like Ricochet, mainly designing based on what they wanted. I made a lot of paua and silver jewellery and sold it at touristy places. That's not my style, so I never wore it. But it's what was selling and paying my rent. Eventually I started Nick von K because of a series of events and changes, but basically because I was ready I guess. I was ready to start making things from my point of view. Things that I loved and wanted to wear myself.

CP: Speaking of wearing things you love, what are your favourite local and international brands?
NvK: I just got these Palladium boots, I didn't really know the brand before but I've been walking round and people comment on them, so yeah I like them. Since I'm always travelling, I tend to go to stores overseas and shop there and bring it home, because no one has the stuff back here. In saying that I do love our local brands. I love Stolen Girlfriends Club and at Fashion Week I'm always heading along to their show to see what they're up to. I also like Leila Jacobs, she does beautiful shows at Fashion Week.

CP: Fashion Week: is it on the cards again this year?
NvK: Yeah definitely. We're one of four designers supported by the K Road Business Association for a Fashion Week catwalk show on the final weekend. Fashion Week is always a blast and its great to be involved in. Although it does take a lot of work, it's a great branding opportunity for us. Plus I love seeing what all the other designers are up to.

CP: How long have your watches been around for?
NvK: We launched the watch collection about a year and a half ago.  It was cool to try something new. We had to do a lot of research and talk to a lot of different watch making companies before we found one who could execute our design ideas in the way we wanted. But the result was totally worth the time we spent on it. We ended up with a quality product that has that definite NVK style. I really love the result, and I love the way it ties in with our jewellery lines.

CP: And your clothing line?
NvK: We started the Motorcycle Club project in spring last year. It was another collaborative side project that we did for fun, and the whole process was very creative and definitely got me happy about life. The campaign photo shoot came out with some really great imagery and the whole idea of the NVK Motorcycle Club was captured well. I love motorbikes and love riding them – its all about a feeling of freedom and rebellion.

We've actually just started talking to Mr Vintage about going into production for us. We specialise in jewellery and we don't really have the resources to launch a massive fashion line, so we're going to get them to produce everything. We dictate design and they will produce the clothing – its pretty exciting.

CP: Why launch in Auckland's fashion industry?
NvK: Well I'm Aucklander. I know the scene here. It's a pretty ideal situation really. You've got the benefits that living in such a small country bring, everyone knows everyone, you can get in touch with people easily, and industry experts are really happy to talk to you. But you also have the benefits of a growing industry. Especially in Auckland there is a big enough customer base now to support designers like me who just want to make crazy shit and sell it to the people that love it.

CP: You've got an international following though...
NvK: Yeah we've got quite a few fans overseas. We've got a dedicated following in Australia. And we also wholesale to boutiques in the US. Our online webstore gets orders from all over the world in places places I never would've imagined like Israel and Korea, it's that crazy internet thing.

CP: Favourite places in Auckland and places of inspiration?
NvK: It's funny. Yesterday I was at a meeting with Pieter Stewart, who runs NZ Fashion Week, and she was saying that New Zealand designers have always been able to hold their own on a global scale. We've got a really strong creative style here. So even being a New Zealander is coming from a strong base of creativity.

I have to say I find just being inside my own mind really creative and interesting, but also I get a lot of my inspiration from overseas when I travel - Bali, Hong Kong, America and Europe. I get so much inspiration from being surprised by different cultures and their aesthetics, I love it.

CP: Where did you get inspiration for your latest collection?
NvK: I went to Europe the summer before last and found the trip really inspiring. My latest collection, The Baron And Baroness all came from that trip. My grandfather was a baron and he had the von K name (von Klarwill), it's where the brand comes from. I never met him so he has always been a legend in my mind. I've always imagined him as this powerful aristocratic figure with his country estate and family crest, and that whole idea inspired the imaginary couple – The Baron and Baroness. The collection is their family jewels.

CP: It's an epic collection. What's next?
NvK: The new collection is coming soon, and the runway show at Fashion Week will be a creative extension of the new collection. Its hard to show jewellery on the runway so we have to get really creative with it and that ends up becoming a show that is more like a crazy carnival experience than a normal runway show. I'm excited to get it all together and see everyone's reaction.