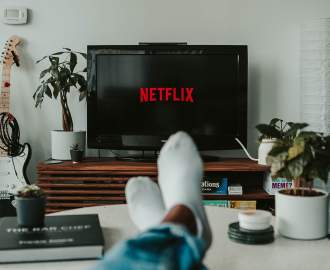 At the end of each year, when 'Last Christmas' gets stuck in your head for months, you probably don't spend too long thinking about it. George Michael's soft tones echo through your brain, his romantic lyrics roll off your tongue and the song's gentle beat becomes the rhythm of your life — but we're guessing you've never added a backstory to the classic 80s festive track, pondered its words in-depth or taken it literally.

Clearly, you're not Emma Thompson. Asked to turn the tune into a screenplay, the Oscar-winning actor and writer has expended her brain cells on this task — and the film that results clearly states that it's "inspired by the song 'Last Christmas'". Given that movies based on games, toys and amusement park rides are now commonplace, a Wham! track is as good a starting point as any. Plus, with Bridesmaids, Ghostbusters and A Simple Favour director Paul Feig at the helm, Last Christmas comes with a solid comedy pedigree. It's highly contrived, as plenty of end-of-year movies are. It's also schmaltzy, as is the song. But, splashed across the screen with a sea of red, green and tinsel, the Christmas flick boasts enough warm-hearted charm to light up this sweetly engaging seasonal affair.

Feig, Thompson and co-writer Bryony Kimmings (the performance artist behind I'm a Phoenix, Bitch) have another trick up their sleeves, with Last Christmas taking its entire soundtrack from George Michael's back catalogue. On paper, a Christmas rom-com based on a beloved pop song, featuring a jukebox worth of tracks by the same artist and unfurling its Yuletide hijinks in London sounds like the work of an algorithm in overdrive. If the world's December playlists joined forces with everyone's Love Actually-heavy festive streaming queues, this premise would be the end result. The film's casting, letting a post-Game of Thrones Emilia Clarke channel her inner Fleabag and deploying a post-Crazy Rich Asians Henry Golding as a tender dreamboat, seems like it has sprung straight from social media posts, too. In short, Last Christmas feels engineered to incite as cosy a feel-good glow as it can — and, in-between evoking a few eye rolls, it manages that feat.

On the subject of eye rolls, the plot details might as well spring from a rom-com handbook. Kate (Clarke) is a down-on-her-luck aspiring singer who works as an elf in a year-round Christmas store, Tom (Golding) is an unrelentingly optimistic bicycle courier who doesn't have a phone and devotes his spare time to helping the homeless, and, despite ostensibly having nothing in common, they're drawn to each other. One of their early run-ins involves a bird shitting on Kate, lest viewers forget that her boozy life moving between various friends' couches and spare rooms is a mess. Befitting this incident, Tom's wisdom-laced catchphrase — because, yes, he has one — is "look up".

As Last Christmas' chalk-and-cheese duo get closer, with Tom's kindness rubbing off on the cynical Kate as she tries to figure out her life, nothing unexpected happens. That's especially true if you do actually spend a few seconds thinking about the song behind the movie's moniker, but Thompson and Kimmings' script has such a heartfelt tone — and an awareness of the tropes it's gleefully adopting — that the film mostly works. It's the cinematic equivalent of drinking eggnog; it might not be your beverage of choice, but, when it's in front of you, you'll genuinely enjoy it all the same. Two weightier aspects of Last Christmas' narrative also help it go down smoothly, the first involving Kate's recovery from a major health scare and the impact it has had on her life, and the second stemming from her family heritage. With the picture set in 2017, and with Kate and her relatives (including Thompson as her broad-accented mother) immigrating from the former Yugoslavia two decades earlier, this is very much a Brexit-era festive romantic comedy.

The film's other key elements — Feig, Clarke and Golding — all hit their marks. Feig's penchant for odd-couple comedy, Clarke's bubbliness behind her usual Mother of Dragons on-screen persona and Golding's innate charisma each sparkle, particularly when the movie begins to lean on its formula (and when the predictable twist, which viewers have been guessing since the trailer first dropped, pops up). Elsewhere, the latter's Crazy Rich Asians mother, Michelle Yeoh, steals her scenes as Kate's boss Santa (yep, that's her name). Naturally, Thompson does the same in the picture's most overtly comic role. Consider them the extra ingredients in this Christmas pudding of a picture — a film that's designed to complement the full meal that 'tis the season, and proves sweetly satisfying enough.