Get out of Wellington without getting into debt.

New Zealand has its fair share of luxury experiences that can cost almost as much as a small car or house deposit. Fortunately for budget-conscious travellers, our fine country is also jam-packed with epic places to explore and activities that won't cost the earth.

Whether you fancy a wildlife encounter, a relaxing cruise or a wine tasting adventure, the North Island has you covered. We've partnered with P&O Cruises to track down five top-notch experiences that won't put a serious dent in your savings. TAKE SELFIES WITH THE SEALS AT CAPE PALLISER

Located on the Wairarapa coast, at the end of a weaving, coastal road with sweeping views, Cape Palliser feels like the edge of the world — at the very least, it's the southernmost point of the North Island. It's here that you'll find the island's largest colony of fur seals. These whiskered mammals can often be seen sunbathing on the side of the road, lounging on the rocks or ducking and diving in the water. Visit between November and January and you might even get a sneak peek of seal pups frolicking in the rock pools.

After your seal encounter, make sure you swing by the famous candy-cane striped lighthouse. Get your comfy shoes on and climb the 250 or so steps to the top — the views are worth it, trust us. As a region blessed with plenty of sunshine, Hawke's Bay is synonymous with top-notch wine and bountiful food options. Get a taste of both on a cycling day trip around some of the region's well-loved wineries with On Yer Bike. Pick your style of bike — a classic cruiser, e-bike or tandem — then set off for a wheelie good day out in golden wine-growing country. There are two suggested routes to take, with the chance to visit up to six wineries on each.

Pedal your way from vineyard to vineyard and pop in for tastes of the local drops. If you're feeling extra fancy, treat yourself to a winery lunch along the way. Bike hire starts from $49. And, as part of the service, the friendly folk at On Yer Bike will collect all your wine purchases and safely deliver them to you at the end of the day. LAUGH YOUR SOCKS OFF ON A COMEDY CRUISE

They say laughter is the best medicine. So, if you're feeling the post-summer blues, a three-night Comedy Cruise with P&O Cruises could be the perfect remedy. By day, enjoy all the Pacific Explorer has to offer, from shopping and water slides to spa treatments and laser tag. By night, see some of Australia and New Zealand's best comedians take the stage. Have a giggle at the comedy gala, take in a cheeky R-rated show, or sit down and have a yarn with the comedians.

Fancy yourself a bit funny? Learn some tips and tricks from the pros in the Comedy Workshop. Then, if you're brave enough, put your comedic skills to the test on stage in the Comedy Gong Show, where the celebrity comedians will judge your performance. The cruise departs and disembarks in Auckland and packages start from $344 per person. 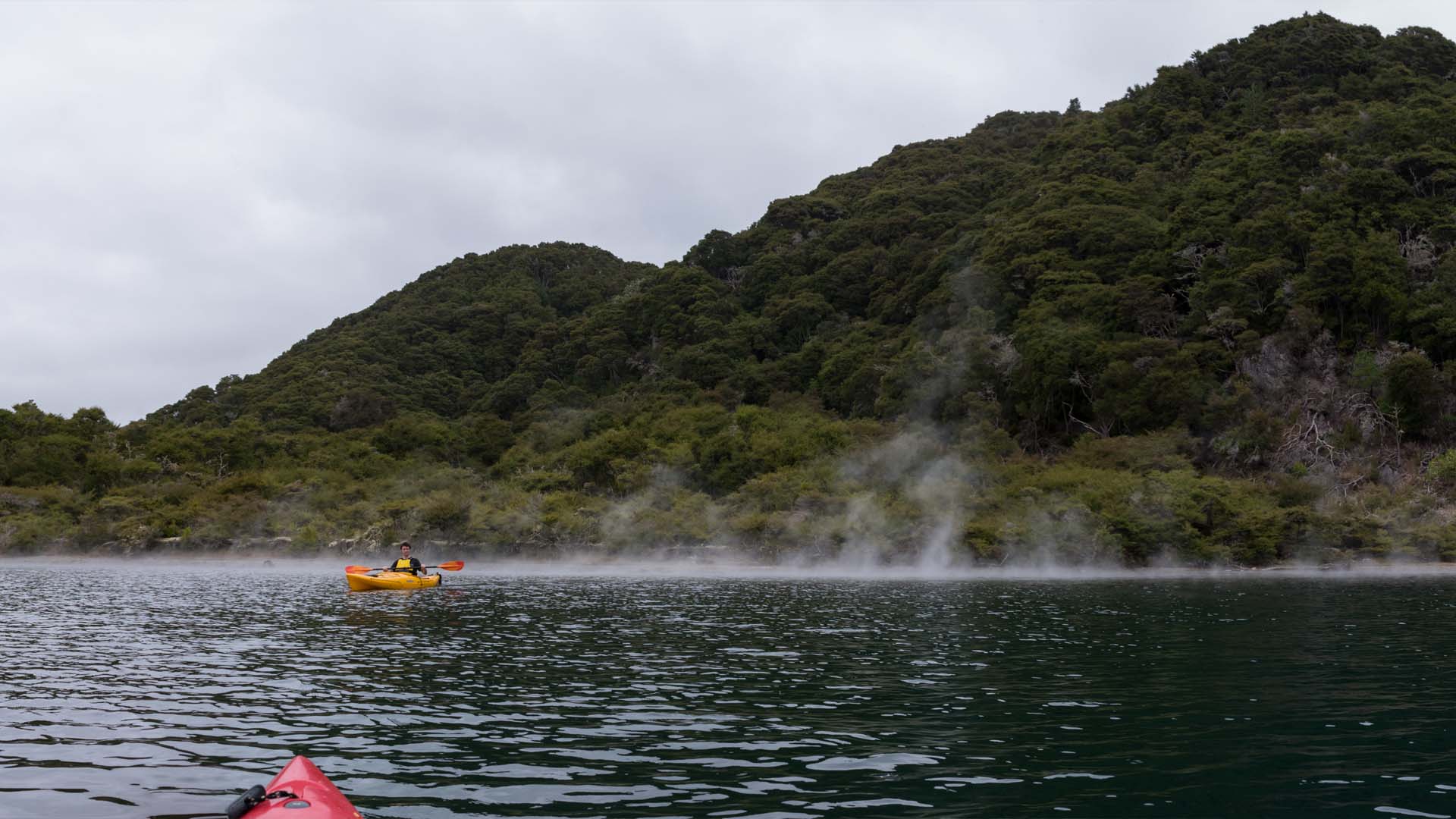 SOAK IN HOT SPRINGS ON THE EDGE OF LAKE TARAWERA

Just a short drive from Rotorua, the majestic Lake Tarawera is the region's largest lake and boasts unique geothermal features. One of these hidden gems is Hot Water Beach. Not to be mistaken for the famous natural hot pool with the same name in The Coromandel, Tarawera's Hot Water Beach is accessible only by boat or via the Tarawera Trail.

This five- to six-hour walking trail meanders through lush native bush and skirts along the lake's edge, before arriving at Te Rātā Bay, where you can soak your cares away in the thermally heated water. Just be careful — some parts of the sand can reach a scorching 86 degrees. Once you're suitably pruny and ready to call it a day, grab a water taxi back to base. Don't have time to go anywhere? You can have an adventure right here in the city. The undisputed birthplace of New Zealand's craft beer scene, Wellington is brimming with breweries and craft beer bars. Thanks to the city's compact nature, it's easy to visit a bunch of these on foot and there's even a handy craft beer trail you can follow to guide you from brewery to brewery. Download the map to start stomping the streets and enjoying tastings of local brews on tap along the way. There are three trails to choose from depending on your vibe — crawl around the classics or venture a little further to hit up the suburban gems. Collect a stamp from each of the venues along the way, too. Once you have eight, you'll score a free t-shirt from Craft Beer Capital.

For more information about P&O Cruises, head to the company's website.