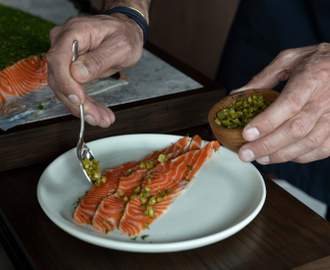 A lesson on Auckland's drinking history comes together with an expert cocktail bar.

A lesson on Auckland's drinking history comes together with an expert cocktail bar.

Take a trip through Auckland's drinking history at John & May's, the high-end cocktail bar that quietly came through and revamped the former Gin Room on Vulcan Lane. Part an ode to Auckland's drinking history and part art deco cocktail room, the new fit-out is a vast contrast from the old — the 70+ gin varieties remain. Walk up the unassuming stairs tucked away past the historic Queen's Ferry bar, into a dimly lit, intimate space adorned with plush velvet seating.

Before you get ready to settle in for the night, it's important to understand the rich history of the Queen's Ferry building, and the fantastic job the team behind John & May's toasts to it. The building was named after the Scottish hometown of the founding bar manager John and his wife May Robertson, and the bar that stands today is in honour to these two important people that sparked Aucklanders' love for days at the pub. It's 155-years-old rich in history, with stories of lawyers, criminals, and journalists all frequenting the pub, along with sailors being locked in the basement after a long night of drinking so they wouldn't miss the ship departure the next day.

Where John & May's stands now was the first pub in Auckland granted with a liquor license in 1865. This is also where the five-section cocktail menu begins. Aptly called 1865, the first page is five cocktails staying true to the classics. Including the May's Old Fashioned, a trusty sipping cocktail with Hidden World gin, peach and rosemary, and Blazed and Confused, a rich cognac-based cocktail served in a teacup.

Then it moves onto Six O'Clock, a section named after the '6 o'clock swill', the common name for an early 1900s licensing law where all pubs closed at 6pm. This meant a hearty hour of revelries ensued once New Zealanders clocked off at 5pm, and the menu is no different. Tart, aromatic and liquor-forward cocktails dominate these five cocktails.

Further along, the Organic Abstraction and Resurgence sections start to get a bit experimental, based on the 80s and 90s when mixing drinks became a true art. With an Easter Island-head rum cocktail, milk-washed black tea vodka, a jewel-shaped glass and green capsicum all part of this era, this is for those looking for a jazzy new tipple. Finally, the Modern Age are five expertly-created cocktails including Wabi Sabi, an Asian-inspired cocktail for the adventurous, with wasabi-infused gin, banana liqueur and pandan leaf.

There's also a handy taste scale that matrixes light to rich and high proof to fresh. Depending on where you want your night to head, you can choose where you sit on the scale. It's on the same scale in which every single cocktail has a small illustration of the vessel it's served in, and they're all unique to the individual drink. Take the punchy turmeric-infused gin cocktail, Toast to the Admiral, served in a glass skull. It's a tribute to the admiral that brought the turmeric root to New Zealand, who was also involved in piracy, leading to the pirate-inspired skull glass.

Apart from the spirits themselves, everything at John & May's is made in-house, using fresh ingredients. That includes infusing all of the spirits, shrubs and syrups. Even the capsaicin tincture — an extract made by infusing fresh hot peppers in vodka and using a NOS canister to extract pure heat and remove the vegetable flavour — is made right here.

The rich stories of our city, house-made ingredients and intimate atmosphere set John & May's apart from the growing number of speakeasy cocktail bars in Auckland, definitely making it the haunt (maybe quite literally) to visit.