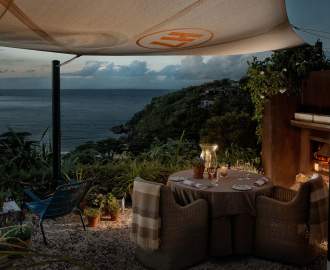 Ahhh, the 1980s. It may have been a decade of shame for the fashion industry, but for today's TV and film producers it's a limitless goldmine of nostalgia. Red Oaks, The Americans, Deutschland 83, the 'San Junipero' episode of Black Mirror and, of course, Stranger Things, have all benefited from the public's deep-seeded yearning for the MTV-era. And that's to say nothing of the countless '80s properties that have been rebooted, reimagined or received unexpected sequels.

King among the works mining '80s nostalgia is Ernest Cline's 2011 sci-fi novel Ready Player One, now adapted for the big screen by director Steven Spielberg. And it is, to put it bluntly, a nerd's wet dream writ large. Set in a densely overpopulated and largely dystopian future, the story sees the world's impoverished masses spending the majority of their time jacked into a VR universe known as The Oasis. But despite being billed as a digital paradise in which anyone can be whomever they want, the reality (both real and virtual) is far narrower. A competition drives every individual within the Oasis, promising both unimaginable riches and control of the program itself.

One such desperate contestant is teenager Wade Watts (Tye Sheridan), who escapes his daily grind in the slums by assuming a virtual identity and racing his vintage DeLorean against his fellow gunters (short for "Easter egg hunters"). Together with his friends (none of whom he has ever actually met in real life), Wade works to secure victory over the thousands of professional gunters hired by IOI, a shady corporation whose malevolent CEO Nolan Sorrento (Ben Mendelsohn) wants to assume control of the Oasis and monetise its every available pixel.

Given that Ready Player One is positively overflowing with pop-culture references, Spielberg should be applauded for inserting so few of his own. There's the DeLorean, of course (Spielberg produced Back To The Future), and the iconic musical cues to accompany it. But by and large his movies take a back seat to other fan favourites like Alien, The Breakfast Club and – in the film's most outstanding sequence – Stanley Kubrick's The Shining. The movie is also heavy on the video game references, from Atari originals through to Overwatch. At its best, Ready Player One uses these tips of the hat to advance its story in wildly creative ways. For the most part, however, the never-ending winks are little more than pavlovian treats. As a result, scenes often feel like cinematic fast-food: delicious at the time but lacking in substance and quickly forgotten.

Spielberg has, for most of his career, been a master of crafting movies that appeal to all ages. And yet even though the majority of the references in Ready Player One are aimed at those born between 1970 and 1990, it's hard to see the film speaking to many viewers above the age of 25. While the CGI is impressive, the action is far too frenetic. The dialogue, meanwhile, is painfully hammy (the gamer jargon, in particular, feels like Spielberg was given all the parts to an IKEA wardrobe without any instructions on how to put it together). At least Sheridan and his co-stars do a solid job, and Mendelsohn is nothing if not committed to his performance – albeit in service of a role that oscillates haphazardly between a serious villain and a pantomime one.

It's hard not to see a great many current or imminent real-life scenarios akin to the world of The Oasis. Which is why it's such a pity that, instead of exploring the dangers of a plugged-in existence, Ready Player One opts to keep things light, ultimately saying little more than doesn't this all look cool? And sure, Spielberg's approach makes for an entertaining blockbuster. But we can't help but wonder about the movie that might have been.