A Weekender's Guide to New Zealand's Bay of Islands

In anticipation of your next weekend getaway, this is our guide to New Zealand's winterless north.

New Zealand's far north is rich in history and beauty. Just a three-hour drive, or a 50-minute flight, from Auckland is the Bay of Islands, a breathtaking destination where the British first settled and the nation's founding document was signed. A journey off the beaten path will give access to sleepy towns that roll on to crystal clear inlets and more than 144 undeveloped islands up for exploration. In the colder months you may struggle to pass another soul on the streets but the region still boasts mild temperatures that welcome outdoor adventures and even a dip with some wildlife — there's a reason why they call it the winterless north. In anticipation of your next weekend getaway, this is our guide to New Zealand's Bay of Islands. 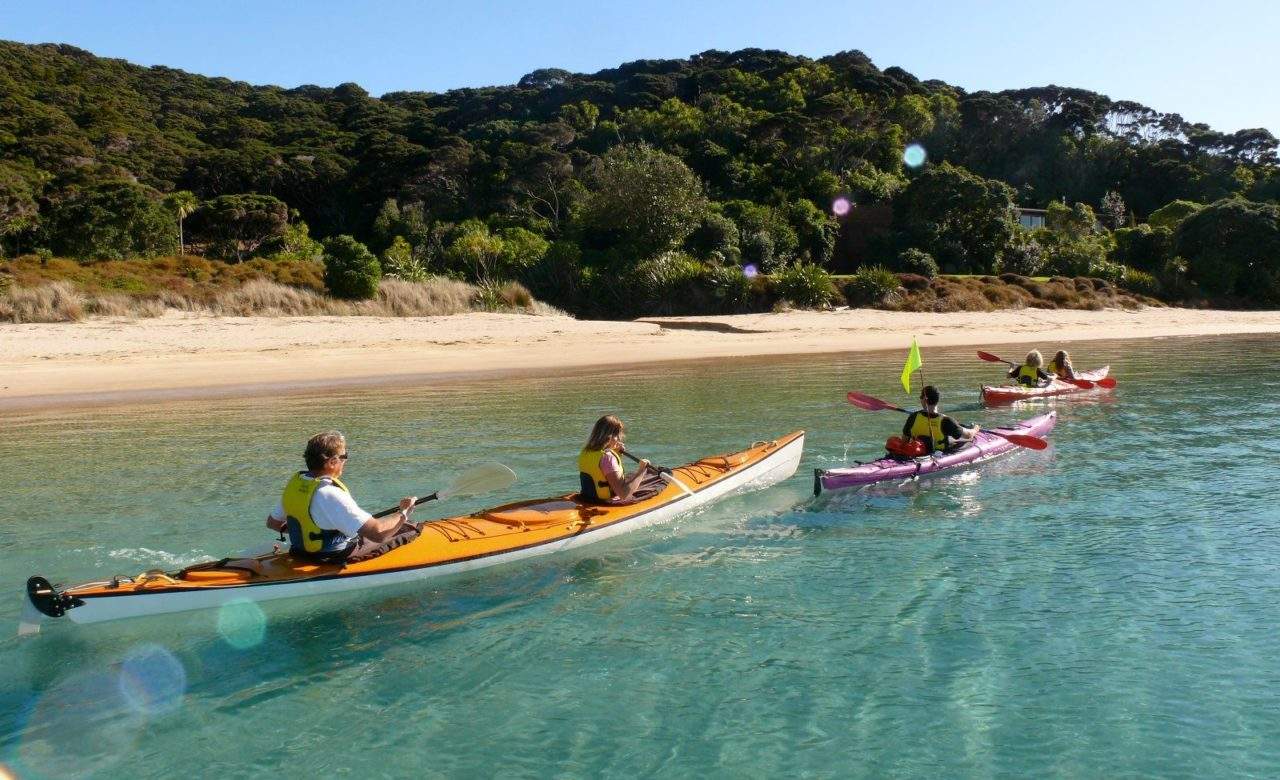 It's called the Bay of Islands for good reason; there are 144 islands that make up the region. A good way to cover the region is by going off-land for a water cruise. Explore Group's Hole in the Rock tour journeys out to the Bay's most iconic geological formation. But before even approaching, and potentially sailing through the giant opening, you'll be treated to a display of wildlife in the area. Dolphins are abundant. So much so that the company promises a 90 percent hit rate of spotting the ocean mammals. Elsewhere, you can expect to spot the smallest penguins in the world, large schools of mullet and blue maomao and the New Zealand fur seal. On the way back the trip stops off at the secluded Otehi Bay on Urupukapuka Island for lunch. Afterwards, you can venture out for a swim, go for a walk and catch sweeping views across the Bay.

Boasting kilometres of white sand coastline, kayaking is great way to explore the area without forking out on boat hire. Coastal Kayaks hosts tours out of Paihia and Waitangi, covering the stunning Haruru Falls and historic lagoon which is abundant with native birdlife. One particular excursion with the company involves a five-kilometre walk through native bush and mangrove forests to the falls, with a three-kilometre guided kayak return through the country's first river port. In large groups it's all about fun and owner Chad heightens the experience with interactive games, onboard water pistols and lighthearted yet informative banter. On the other side of the one-way bridge lies the official birthplace of New Zealand, Waitangi. In 1840, British representatives and a number of high ranked Māori chiefs signed the Treaty of Waitangi to share ownership of the land — albeit only the English version was signed, leaving little in favour for the land's original inhabitants — you'll learn more in the onsite museum. Guided tours of the historical Waitangi Treaty Grounds give insight into Māori culture, the arrival of the British and subsequent Treaty signing. You'll also discover a traditional Māori waka (or canoe) that gets its yearly outing on Waitangi Day and the restored cottage of the former governor. For further interest, there's the option to book the interactive Māori cultural show showcasing traditional music, weapons and games and sample the goods from a hāngi — a traditional Māori earth oven. It's all about local, seasonal produce in the Bay which opens up a whole world of fresh meal options. A good place to start is at The Old Packhouse Market. Found in Kerikeri (in an old packhouse, no less) the weekly vendor gathering is the perfect spot to load up on supplies before hitting the road. Expect to pick up everything from homemade pies to raw milk, deep-fried oyster po' boys and fruit and vegetables from literally just around the corner. Enjoy your finds while listening to live music, receiving a palm reading or getting a reflexology massage.

Across the road is another must-visit attraction. As soon as you enter the Makana Confections giftshop the smell from the adjoining factory will be tugging on your heartstrings. The best part is that free samples are handed out upon arrival so you can try before you buy — you'll also see staff crafting the exact same thing through the window, so you know it's fresh. The cafe offers a selection of gelato, chocolate truffles, cakes and slices.

While in Kerikeri head to The Rusty Tractor for a modern interpretations of breakfast classics and a four-shot bucket of coffee, Cafe Jerusalem for authentic Israeli cuisine, and La Taza Del Diablo for portions of Mexican cuisine that not even the ravenous could get close to finishing. Not many would relate the far north to wineries but there are plenty worth stopping into. At Kerikeri's Marsden Estate you can enjoy an educational wine tasting before settling on your preferred varietal and sampling a platter under the vines in the courtyard. Found just outside of Russell, Paroa Bay Winery is a family-owned property set against the rolling hills. Stay for a flight and try the Mediterranean-inspired menu at newly opened restaurant, Sage.

Elsewhere is Russell, The Crusty Crab is the place to order piping hot fish 'n' chips to enjoy on the beach; in the warmer months Hone's Garden offers wood-fired pizza, fresh beer and friendly community vibes; Hell Hole is a great option to start your day with loaded bagels and fresh coffee; and Gables offers both bistro fare and a history lesson as the oldest licensed restaurant in the country.

Check out our full guide to eating and drinking in the Bay of Islands here. Thirty minutes from Kerikeri, well off the beaten path down a gravel road, you'll find Takou River Lodge. Once owned by a pair of bachelors, the 150 acre site is now the pride and joy of environmental scientist Anna and engineer Ian O'Reilly. Nestled in the surrounds of certified organic beef farm and regenerating native bush are five luxury cabins for all different price points and occasions. The pick of the crop is the aptly titled Magic Cottage. Set on the edge of the Takou River, the property ticks all the boxes for a romantic escape, including an open-air bath and early morning birdsong. Along with the accomodation, guests can explore the native forest, use supplied kayaks for an adventure to the beach and book the riverside hot tub, which after-dark is the perfect place to spot glowworms. Unless you plan to make the trek back into Kerikeri, you'll need to bring your own supplies. A dinner option can be provided by the highly regarded Food at Wharepuke by chef Colin Ashton who presents a blend of modern European and Thai-inspired cuisine.

With the ocean practically lapping into its foyer, The Duke of Marlborough is a pristine destination to unwind in four star accommodation or simply stop by for a bite to eat in an award-winning restaurant. The property was erected in 1827, originally operating as an unlicensed grog shop by an ex-convict. It later became the first licensed hotel in New Zealand. The property still retains its vintage appeal; the rooms are grand with high ceilings, the walls are covered with marine memorabilia and the solid furniture certainly has a story to tell. The restaurant is all about showcasing local seasonal produce and modern interpretations of classic favourites. You can expect to sample local oysters or oven roasted fish that was caught directly in front of the hotel. The beverage list is extensive with over 100 wines and 30 beers from the region and further abroad. The wine tasting rack is a good option for indecisive diners, offering three generous samples to sip back as the sun drops over the inlet.

Kerikeri Airport is the region's main port of call. From Auckland Airport it's a breezy 50-minute flight to the sleepy terminal. Alternatively, it will take you just over three hours to drive from Auckland to Paihia and Russell.

Feature image: The Duke of Marlborough.