We’re not talking lion hunting while munching caviar and canapés, nor are we dreaming of zebra reductions or tiger tartare: this gourmet safari, courtesy of travel experts Mr & Mrs Smith, features hotels whose restaurants alone are worth a bumpy ride in a 4X4, whose chefs are the big game of the food industry, and whose dining rooms draw food critics like thirsty wildebeest to a watering hole. City grind got you ground down? Sydneysiders in need of respite should write their own prescription for a stay at African-inspired Sangoma Retreat in the Blue Mountains, just a 70-minute drive away, where five light, airy and very spacious suites loll across 10-hectare grounds. Rooms are blessed with huge freestanding Philippe Starck tubs and wraparound balconies for soaking up bush scenes, but chances are you’ll be hard-pressed to tear yourself away from the restaurant. Owner/chef Zenga Butler cooks up globe-trotting cuisine with Ottolenghi influences (healthy, seasonal, locally sourced and largely organic). It’s a relaxed affair: heaped platters of fish and salad, which you can help yourself to.

Australian chef David Thompson’s rice-white and mango-yellow Nahm restaurant in the Metropolitan by Como, Bangkok hotel may survey the pool, but you’ll only have eyes for your food, however many starlets or stallions strut past. Expect elegant Thai cuisine featuring tingling flavours and succulent seafood: kingfish salad with chilli, lime and mint, deep-fried crab with pomelo, and coconut-cream-slathered desserts. Lesser known, but equally wonderful, is the hotel’s guilt-free Glow restaurant, where Amanda Gale’s zingy salads keep you feeling great. The low prices (around AU$21 for a fresh juice and two-course lunch) are equally revitalising. Need a dose of vitamin C? Head to Royal Mail Hotel in the Grampians, where fat pumpkins, albino eggplants and juicy tomatoes flourish ripely in the green, green garden. Dan Hunter (formerly head chef at Spain’s two-Michelin-starred Mugaritz) flirts with vegetarians and omnivores alike via two 10-course tasting menus: one leafy; one meaty. This chef melts rules like butter: lamb comes with liquorice; pigeon is paired with white chocolate. Such creativity has garnered a fistful of awards, so book your table when you book your bedroom. There’s also a casual bistro with a sunny courtyard and a tapas menu, and – for less calorific moments – mountain views, hills for hiking and a peaceful outdoor pool. Scantily clad door-sirens with flame-red wigs, rooms with DIY martini kits, a buzzing bar and a spa with hammam, ice-room and hipster barber: at sexy QT Sydney hotel, you could easily forget to eat. That would be tragic, though, given the excellent restaurant housed in the hotel’s historic State Theatre and Gowings department store buildings. Helmed by executive chef Paul Easson, under the creative direction of Sydney restaurateur Robert Marchetti, Gowings Bar & Grill is a funked-up Euro-flash brasserie which relies of the most artisan producers for the freshest Australian ingredients, and cooks them to perfection in wood-fired rotisseries. Repair to the Gilt Lounge afterwards for vintage cocktails. If you fancy drinking in both Lake Wakatipu views and silky seafood chowder, book a bedroom at Eichardt’s Private Hotel in Queenstown. This glam grand dame has mountain- and lake-spying rooms, a famous bar and a very good restaurant. Choose between dining at the award-winning bar or at Eichardt's Parlour, a private lounge and dining area on the first floor, styled with Georgian grace. Chef Will Eaglesfield is the talent in charge, plating up delicious dishes such as wild-game terrine with house pickles and mustard, and salted-cod-and-potato croquettes with herb aioli. Comfy sofas, friendly service and a toasty fireplace keep things cosy. Delicious little Lake House hotel in Daylesford began life in 1984 as a 40-seat, weekend-only restaurant, owned by acclaimed chef Alla Wolf-Tasker. Fast forward more than a few years, and lake-scoping rooms and a Scandinavia-inspired spa with treetop hot tubs and a blissful 75-minute signature treatment have been added to the equation. The emphasis is still firmly foodie, though: what’s dished up varies according to the season, but you can expect house-made charcuterie, heritage vegetables and fruits, local trout, eel and cheeses, free-range pork and wagyu beef. Be sure to book your table when you bag your stay, and call by Alla’s more casual café, Wombat Hill House, in the nearby Botanic Gardens. 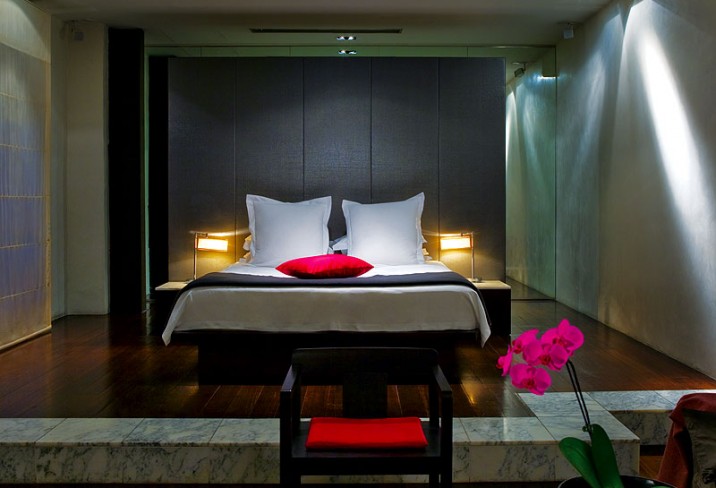 Devotees of dim sum will think they’ve died and gone to har gow heaven when they clap eyes upon Establishment Hotel’s impressive Cantonese restaurant, Mr. Wong, a sprawling 240-cover space. When pork buns pale, there are plenty of other in-house options: Est., for Australian fine dining with French and Asian flair; Sushi-e, for succulent sashimi; Palings, which has a 'kitchen' menu designed for sharing, and the stunning Gin Garden bar, with lush plants, sexy pendant lamps, raw brick walls and a choice of Thai and Australian dishes. This multi-tasking pleasure palace can organise access to the Fitness First gym next door, if you start to feel fatty. Fan of fishing, food and fast-paced adventures? Huka Lodge has all three covered. Set in Taupo, home to New Zealand’s largest lake in the heart of the volcanic North Island, this heritage 1920s hotel was founded as a frill-free fishing lodge, but don’t expect simple dinners of fisherman’s pie. Instead, the Michelin-starred executive chef brings European influences to contemporary New Zealand cuisine, harnessing the finest fresh, flavoursome local ingredients, including fruit from the orchard. Menus change daily according to the produce available, but previous crowd-pleasers include: freshwater lobster butter-poached with lemon-infused gnocchi and watercress, and chocolate fondant with espresso ice-cream. Cosy up in the main dining room or dine alfresco in the riverside grounds. Lovers of vine things have long flocked to the green-gold hills of the Hunter Valley, where some of the country’s sweetest, punchiest grapes flourish. Spicers Vineyards Estate makes the most of its regional charms: the 350-strong wine list (manager Belinda Stapleton's pride and joy) includes local gems from Margan, Tyrrell's and the like, or old-world classics from Burgundy and Bordeaux, and the restaurant has a veggie patch, chickens and pigs, and clever chef Mark Stapleton. Botanica's contemporary menu is loaded with lip-smacking dishes, such as house-made charcuterie, slow-cooked duck with caramelised fennel, and hand-cut pappardelle with lobster cream. Rattan chairs, earthy tones and floor-to-ceiling windows offering serene vineyard views make for a relaxed setting. Melbourne knows that the way to a visitor’s heart is through their stomach: this is the city where pop-up eateries sprout like mushrooms in the little laneways, after all. The Prince boutique hotel, a colourful art deco distraction in bayside St Kilda, lives up to its location, with not one but two ravishing restaurants. At Circa, rising star Paul Wilson and seasoned chef Jake Nicolson rustle up sharing plates with Asian zing: kingfish sashimi with yuzu and basil jelly, or bonito with green tea, for example. There’s a Mexican in the basement, too, but don’t be scared: Acland St Cantina spans a casual canteen and a cute, characterful restaurant. Save room for the salted-caramel ice-cream churros taco (we kid you not).