On a chilly winter's day, it can be mighty tempting to just spend it wrapped up in blankets on the couch. But we've done enough of that recently. Instead, spend that free time exploring friendly pubs with crackling fireplaces, cosy cafes with comforting winter dishes, dramatic sunsets and brisk walks. When the time's right, wrap yourself in your warmest winter coat, crank up the car's heater and escape to the country. If you've only a day to spare, fret not. These ten pretty, winter-embracing towns are only a hop, skip and jump away.

For hot mineral springs, top-notch restaurants and cool climate wines, head inland to the Southern Highlands or the Blue Mountains. Or, for whale watching and sparkling ocean vistas — without the hassle of summer crowds — make tracks to the coast.

While regional holidays within NSW will be allowed from June 1, some of the places mentioned below may still be closed due to COVID-19 restrictions. Please check websites before making any plans. Dotted with sandstone buildings and, some say, haunted by ghosts, this historical village lies a short drive from Sydney in the Southern Highlands. Start with a coffee and baked goodie at Gumnut Patisserie, before heading to Eschalot for hatted fare made with local produce from the onsite kitchen garden. Alternatively, you'll find hearty pub classics and two fireplaces at the Surveyor General Inn. Opened in 1834, it's the oldest continuously licensed pub in Australia. Also worth exploring are the Berrima River Walk (look out for platypuses), Harper's Mansion and Berrima's many independent shops. Another Southern Highlands settlement that isn't shy of winter is Bowral: a 13,000-person town on the Mittagong River that's surrounded by rolling farmland and wineries. On arriving, refuel with a coffee at Rush or Flour Water Salt, before strolling around town checking out Dirty Janes' epic collection of antiques and vintage clothing, as well as Browns Bookshop and the Bowral Art Gallery. Come lunchtime, settle in for a feast at The Mill. For an afternoon wine or coffee beside a roaring fireplace, check out Briars, Peppers Craigieburn or Bendooley (home to Berkelouw Books and a massive second-hand book collection). 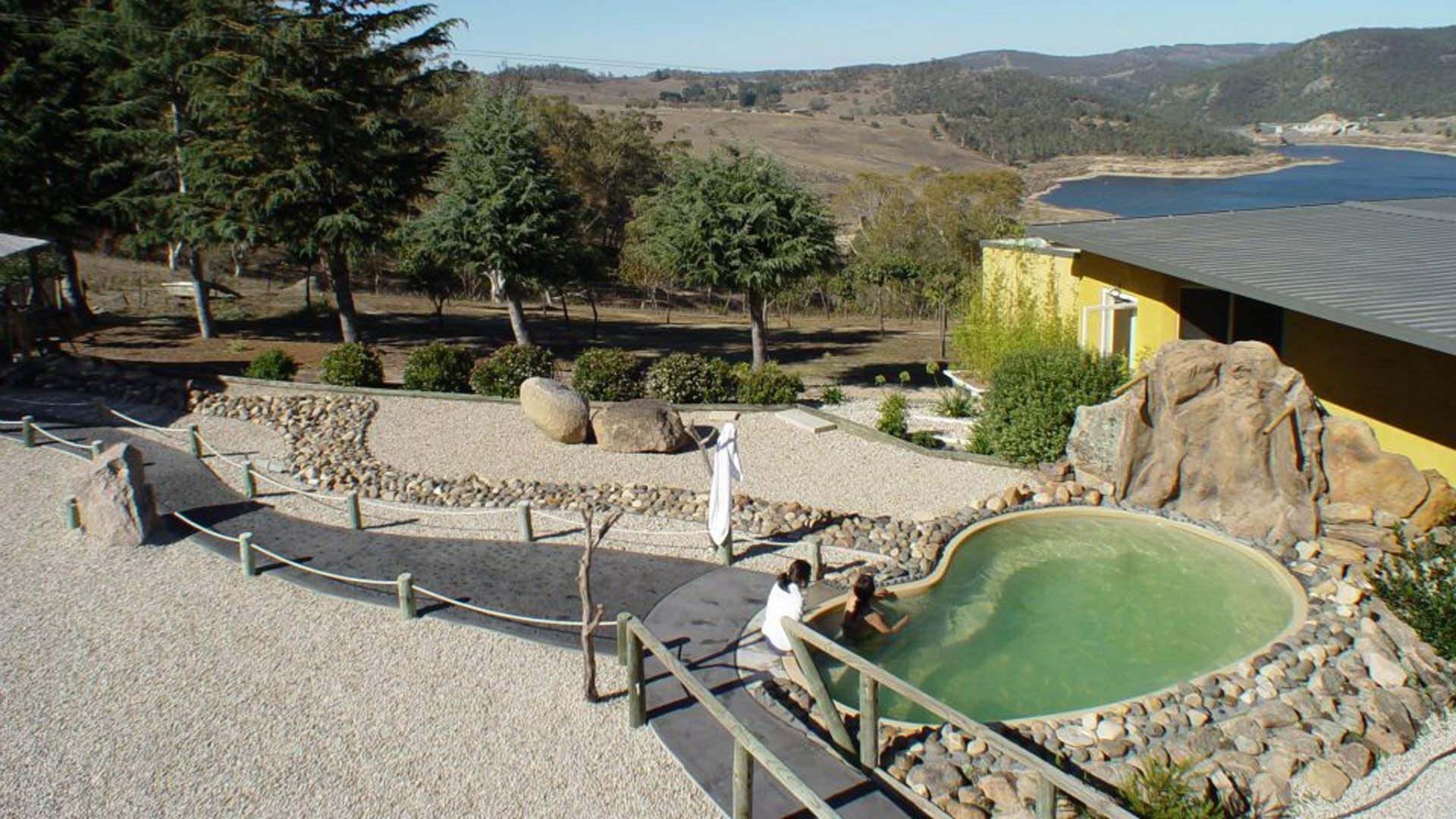 Of the many indulgences that make winter worth enduring, a long soak in hot mineral springs is one of the best. You can do exactly that at the Japanese Bath House in South Bowenfels, a two-hour drive west of Sydney. Once you're completely relaxed, make tracks to Mount Victoria, which is about 15 minutes away. Here, you can catch a film at a 1930s cinema, while slurping up homemade soup (and homemade choc tops), before swinging by Mount Victoria Manor for a craft beer by the fire. This heritage-listed mansion was built in 1876 by John Fairfax, founder of the Sydney Morning Herald. If you're keen to hang around and catch a wintry sunset, drive to Sunset Rock Lookout, which you'll find at the end of Beaufort Avenue.

How far?  A two-hour drive from Sydney To experience a Blue Mountains winter without travelling as far as Mount Victoria, stop at Katoomba, which is 90 minutes' drive west of Sydney. Make your first destination Yellow Deli, where you can rest among handcrafted wooden furniture and an open fire. Just be aware that the cafe is run by a cult. If you'd prefer to avoid, grab a butterscotch latte and miso pumpkin toastie from Frankly My Dear. Next up, stretch those stiff legs with a bracing walk along the Prince Henry Cliff Walk, which journeys along cliff tops taking in incredible views for seven kilometres, before reaching Leura. The best spot in town for lunch is Leura Garage — its warming winter menu includes 12-hour braised lamb shoulder with pomegranate glaze, confit garlic and rosemary. Catch the train back to Katoomba for a fireside wine in The Carrington's grand 19th-century bar. Located along the Bells Line of Road, which runs to the Blue Mountains from Sydney's northwest, this idyllic village is famous for its apple-growing powers. They're not the only fruit that flourishes here, however, and if you're keen to get all 'country' you can pick your own fruit at Bilpin Fruit Bowl. Alternatively, find out how local apples taste when transformed into cider at Hillbilly, then grab a burger for lunch from Maggie Lou's Bite. Another cosy spot, ten minutes' drive away in Kurrajong, is Lochiel House, which serves up Asian-influenced creations. Before returning to the big smoke, be sure to take a wintry stroll around Blue Mountains Botanic Garden and grab an apple-charged treat from The Potager Mount Tomah. This cute village, found two hours' drive north of Sydney, is the gateway to both the Hunter Valley and World Heritage-listed Yengo National Park. Begin your adventure with a comforting brekkie at Mulla Villa in the form of french toast with cinnamon sugar, whipped cream and berry coulis — then take a wander around Wollombi's historical buildings or get your bearings at Finchley Lookout, with 360-degree views over Yengo's rugged wilderness. Meanwhile, at the Wollombi Tavern, you'll find friendly folks and a fireplace. Just seven kilometres down the road is Laguna, where the Great Northern Trading Post serves up generous fare packed with local produce and hosts live gigs to spoken word performances and artisanal markets. In the Hunter Valley's northeast corner is Morpeth, a picturesque 1500-person village on the banks of the Hunter River that's filled with 19th-century buildings. One of the tastiest, winter-friendly brekkies in town is at Common Grounds, where offerings include house-made spicy beans with black sesame crusted avocado. After that, take a relaxing walk along the river bank or check out Campbell's Store, home to 15 independent shops dedicated to various arts and crafts. Among the town's other warming experiences are the Australian Alpaca Barn and Mortels Sheepskin Factory, where you can learn all about the making of ugg boots. Finish up with a fireside brew at The Commercial or venture into the Hunter Valley for wine tasting galore. Half the fun of day-tripping to St Albans is getting there. So don't rush. For the most part, you'll be travelling along the Old Northern Road, which leaves Sydney at Dural before making its way through rolling farmland and national parks. Next comes the cable ferry crossing at Wisemans Ferry, followed by the twists and turns of pretty Macdonald River. The main attraction at St Albans is the Settlers Arms Inn, a Georgian coaching inn — and pub — built by convicts and backdropped by mountains. While away the afternoon eating and drinking beside the open fireplace before gearing up for the drive home — or stay the night. When cooler weather rolls around, beach-going folks swap swimming, surfing and sunbathing for the wonder of whale watching. From late-May to July and September to November, Australia's east coast hosts a continual spectacle of breaching, blowing humpbacks. For a day trip that involves splendid views of these magnificent creatures drive to Kiama, a 90-minute trek south of Sydney. The best vantage points are Blowhole Point, Bombo Headland and Marsden Headland. Should you work up an appetite, visit Flour Water Salt for coffee and freshly baked goods, Penny Whistlers for cafe fare with a coastal view or The Hungry Monkey for burgers. Another top-notch location for whale watching is Port Stephens, on the mid-north coast. You'll have to get up early for this one, though, as it's a 2.5-hour drive from Sydney. Warm up with a steep, 45-minute walk to the summit of Tomaree Head, where you'll be rewarded with sweeping views — and maybe spot a few whales. To see them close up, book an eco-tour with Imagine Cruises, whose trusty craft Envision holds just 22 people. Re-energise with a feast at one of Port Stephen's many cracking eateries, be it Little Beach Boathouse for premium seafood overlooking Nelson Bay, The Point Restaurant for Asian-inspired bites, or The Little Nel Cafe for its outstanding terrace that's perfect for soaking up winter sunshine.