For artist Sarah McCloskey, there was never really a question whether or not she would pursue a career in art. "There's never been another thing that I've been interested in," she says. Growing up in Perth, McCloskey explains that she "always, always had a pencil in [her] hand". After graduating from high school, she completely immersed herself in that world. She worked part-time in an art gallery and started a university degree in fine art, all while steadily honing her craft. In February 2019, she moved to Sydney to pursue being an artist full-time. It was one of several choices that McCloskey has made over the last decade in a bid to shape her career and find her unique creative voice.

This year, McCloskey joins a slew of visionary creatives collaborating with Miller Design Lab — the home of creativity and self-expression built by Australia's leading minds in design, art, technology and fashion. The platform is a celebration of our nightlife and its impact on culture to deliver exceptional moments to you and your home. Here, we speak to McCloskey about seeking new challenges that shape her creative voice and finding inspiration. There's something that's really clear when talking to McCloskey: she isn't afraid of facing a challenge. In fact, she welcomes it. "I think the things I feel most proud of come from throwing myself into something new and giving it my best shot," she says.

Although the bulk of her current work is painting murals, it's a relatively new medium for her after concentrating on graphite illustrations for the first part of her career. Explaining how she fell into the medium, she says, "I just was lucky enough to be working in a space and surrounded by some people who had been painting walls for decades."

Since then, McCloskey's painted murals for several arts festivals, including Wonderwalls Festival in Port Kembla. But there are plenty of tricky aspects of it. "They were some of my largest walls and had tight timeframes. I learned a lot and was super proud. I do love painting murals, but I definitely feel it afterwards. Especially if I'm painting something really big in a short amount of time in the sun or the rain.....It is pretty physically taxing." Acknowledging that she can't continue with murals long-term, she started "dipping her toe" into yet another new challenge last year: oil painting. And she began with what she describes as "a pretty vulnerable choice to paint a sad selfie".

Now, rather than seeing the cancellation of much of her upcoming mural work at festival and events (due to COVID-19) as a setback, McCloskey's taking it as an opportunity to keep forging ahead in her career path. "I'm in the studio constantly and actually putting time into some oil paintings that I've had sitting here waiting for me to finish. I want to build up a body of work with a view to have an exhibition."

One of the most recent oil paintings that McCloskey has produced was for Miller Design Lab, which she describes as "pretty true to my style... which is very much portrait-based. I do have an interest in strong colour palettes, so I chose neon to be my light source, which is something I hadn't done before."

Delving further, McCloskey explains how customisation plays a role in her process. "Through the years, I would take a photo reference [from Pinterest or Instagram] and tweak it to make it my own... I like to keep the realistic aspects and the things that make it recognisable, especially if it's a face, but turn it into something that doesn't really exist in this world. Through painting, especially murals, that's something I do using colour and other botanical elements." 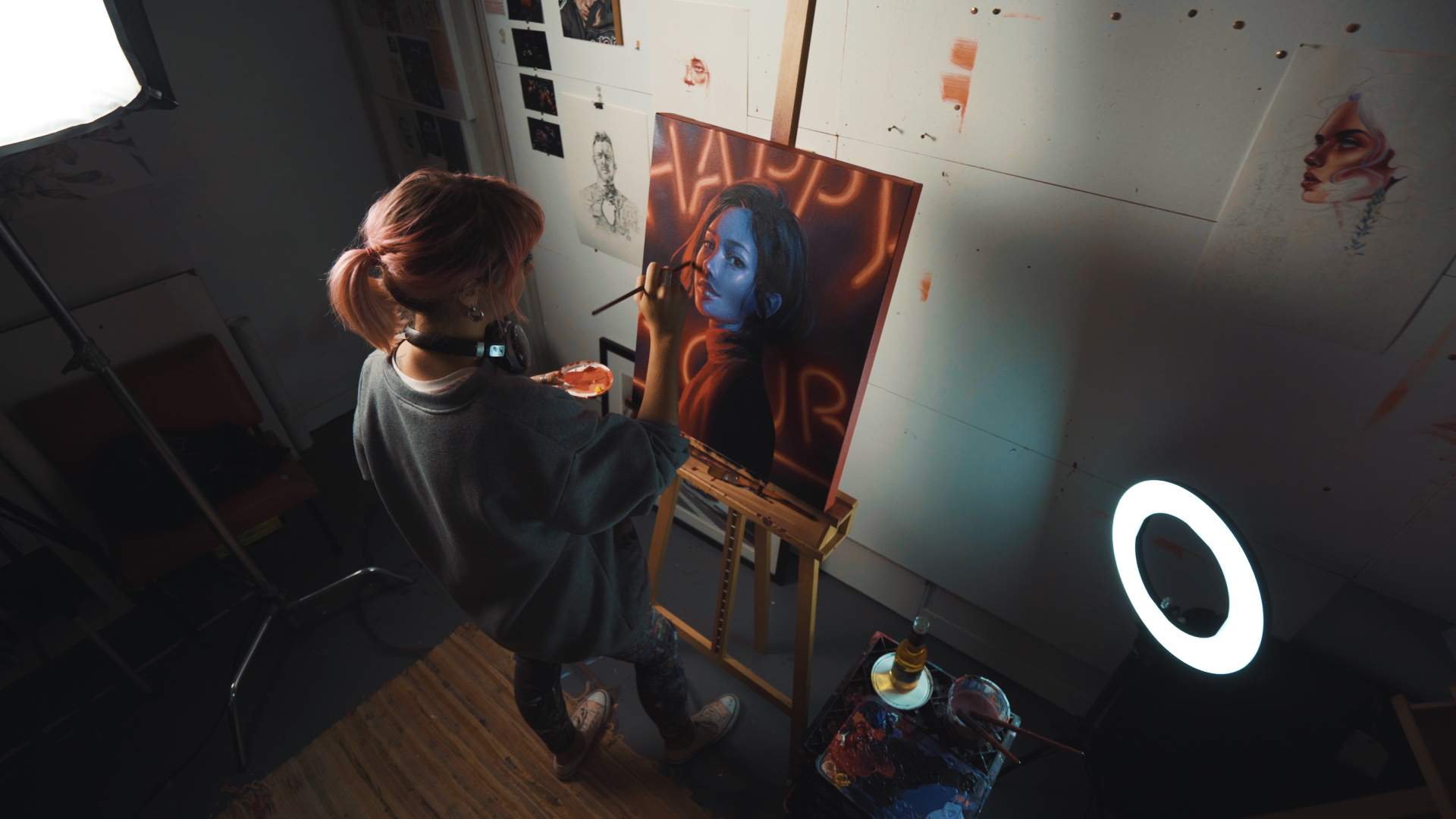 It's no surprise then that McCloskey considers nature a huge source of inspiration. She mentions the Royal Botanic Garden and Wendy Whiteley's Secret Garden as two of her favourite places in Sydney to visit.

And, when the sun goes down, the inspiration keeps flowing. "The nightlife of the city is that perfect time at the end of the day when everybody gets to go out and connect with people. Whole creative industries exist in the night for our pleasure and entertainment, and being able to get out amongst that is an amazing way to recharge."

For Sarah, that means tracking down live music. "I'm always that person who is trying to drag all my friends to some gig. That's the perfect place to see a bunch of other creative people in their element on a stage. I always feel pretty motivated by that — seeing people smash it in their own creative field. I'm not a musician at all but seeing one is like 'Fuck yeah, I'm going to go and be good at my thing now'."