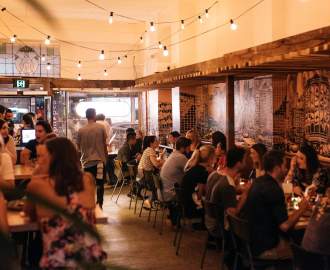 When Premier Daniel Andrews announced Victoria's latest stage of eased COVID-19 restrictions, he gave cinephiles a particularly exciting piece of news. Movie theatres have been closed around the country since mid-March; however, as of Monday, June 22, projectors will be allowed to start whirring again in the Garden State. And, while that doesn't mean that it's popcorn-munching business as usual quite yet, local cinemas will gradually begin to reopen.

Cinema Nova will be one of initial places to start welcoming movie buffs back into darkened rooms, opening its doors on the very first day it can. It'll relaunch with The Invisible Man, which was already screening in March when cinemas shut, as well as with new films such as The Assistant, The Wretched and Monos.

Also reopening on June 22 are the Classic, Lido and Cameo cinemas, which'll show both recent releases and fresh flicks. That includes the likes of Sonic the Hedgehog, For Sama, Honeyland, Honey Boy, Jojo Rabbit, Portrait of a Lady on Fire and The Current War, plus new movies that were originally slated to hit cinemas during their closure, then switched to video-on-demand releases, and are now brightening up the big screen anyway. That means that if you haven't yet caught the Hugo Weaving-starring Hearts and Bones at home, you can now do so in a theatre. The same applies to watching Rob Brydon and Steve Coogan eat and banter their way through The Trip to Greece.

And, joining the June 22 relaunching bonanza are Reading's Victorian sites. The company has announced its reopening date, but is yet to reveal what will be screening. Come Thursday, July 2, Palace's Victorian sites will also let punters back in. And, other than The Astor Theatre, they'll do so with a lineup of brand new movies that haven't screened in Aussie cinemas or hit VOD as yet. On that date, film fans will be able to check out The Booksellers and bakery-set British drama Love Sarah. The week after, Waves and A White, White Day will follow suit, before (hopefully) Christopher Nolan's Tenet hit the following week.

If Tenet does release on Thursday, July 16 as planned — which depends not only on Australian cinemas, but whether enough US and worldwide cinemas have reopened — it's safe to expect that plenty of other Victorian picture palaces will relaunch on or around then. In fact, that's the date that the local industry has been working towards.

At the time of writing, big chains such as Village and Hoyts haven't revealed their reopening dates, nor has The Sun Theatre — but, again, expect that to change as mid-July creeps up.

For more information about what's screening in Melbourne from June 22, or to book tickets, visit the websites for Cinema Nova; the Classic, Lido and Cameo cinemas; and Reading. For details about Palace's reopening from July 2, visit the chain's website — and The Astor Theatre's.