For the acclaimed photographer's latest shoot, more than 2500 Aussies stripped off on the famous stretch of sand to raise funds for and awareness about skin cancer.

Usually, heading to Bondi Beach means keeping your kit on. Visitors can expect to see swimwear as far as the eye can see, but no stark-naked bodies. The morning of Saturday, November 26 wasn't a usual morning at the famous Sydney spot, however, with more than 2500 folks baring all — for art, and for an excellent cause.

Back in October, acclaimed New York artist and photographer Spencer Tunick announced that he'd be staging another of his mass nude shoots in Australia, this time heading to a Harbour City beach. That destination: Bondi, which has welcomed everything from a Stranger Things rift to a WorldPride rainbow already this year, and now went naked ever so fleetingly. Kicking off before sunrise and snapping to capture the early-morning light, the art installation marked the first and only time that Bondi has become a nude beach. That said, getting starkers was only permitted for the shoot. Dubbed Strip Off for Skin Cancer, Tunick's latest work was timed to coincide with National Skin Cancer Action Week, which started on Monday, November 21 and runs till Sunday, November 27. More than making history, raising awareness about — and funds for — fighting the disease was the main aim.

"Skin unites us and protects us. It's an honour to be a part of an art mission to raise awareness of the importance of skin checks. I use the amazing array of body types and skin tones to create my work, so it feels perfectly appropriate to take part in this effort in that my medium is the nude human form," said Tunick back in October, when the installation was announced.

"It is only fitting that I use my platform to urge people to get regular check-ups to prevent skin cancer. I have not had a skin check in ten years, so I am one of the many who have wrongly ignored getting them regularly. One can say I am traveling all the way to Australia to get one!", Tunick continued at the time. 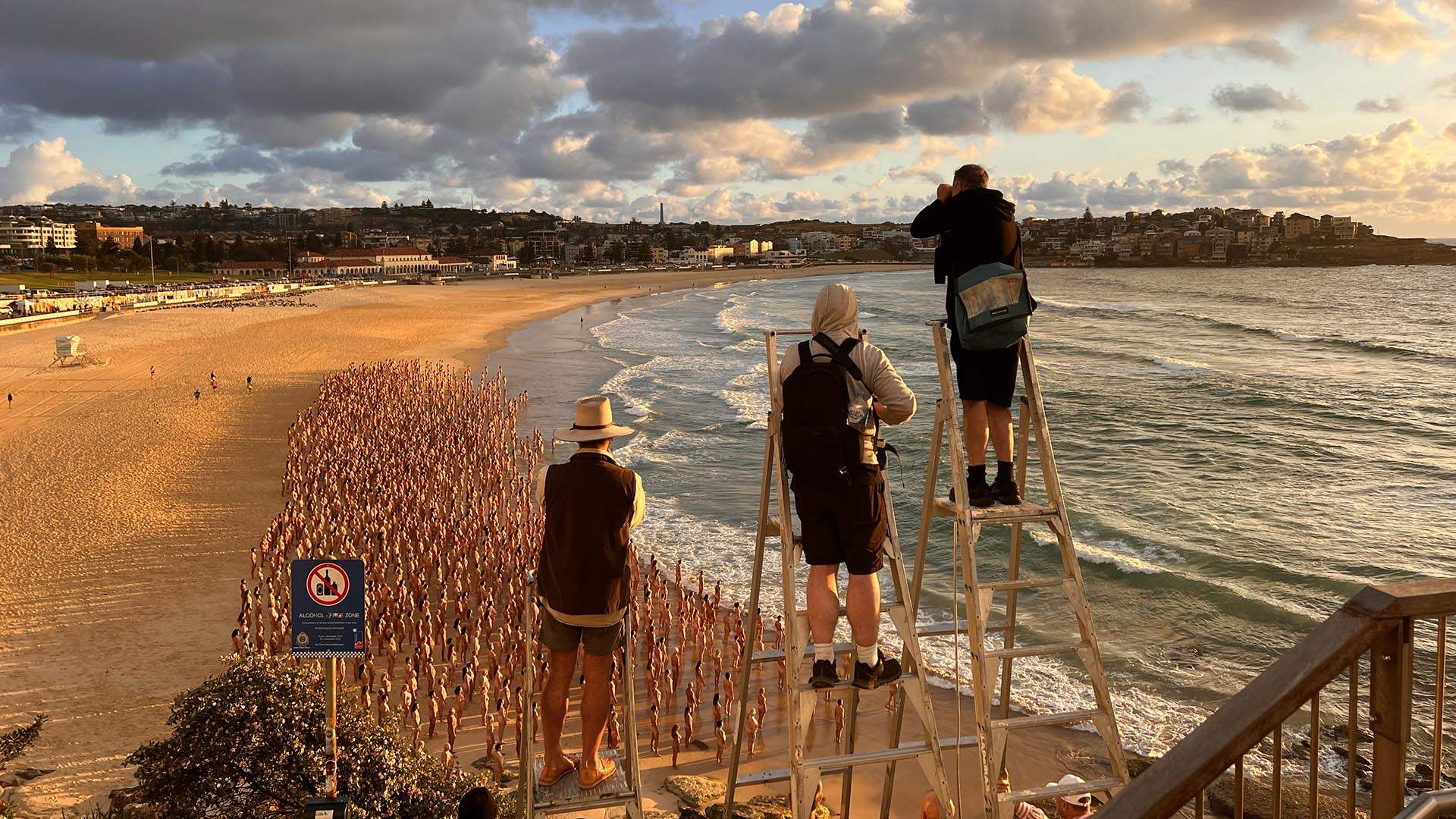 For more than two decades, Tunick has been staging mass nude photographs in Australia. In fact, it's been 21 years since the country's first taste of the internationally famed talent's work, when 4500 naked volunteers posed for a snap near Federation Square in Melbourne as part of the 2001 Fringe Festival.

Tunick then photographed around 5000 nude people in front of the Sydney Opera House during the 2010 Mardi Gras, headed back to Victoria in 2018 shoot over 800 Melburnians in the rooftop carpark of a Prahran Woolworths, and went to the Whitsundays with almost 100 Aussies in 2019. Elsewhere, he's photographed the public painted red and gold outside Munich's Bavarian State Opera, covered in veils in the Nevada desert and covered in blue in Hull in the UK. The list goes on.

Wondering why Tunick amassed at least 2500 volunteers this time? That exact number of participants reflects the 2500-plus Aussies who pass away each year due to skin cancer.

"With Australia recording the highest number of deadly skin cancers in the world every year, it made sense to host this monumental public awareness campaign in a city that has so many people at risk," said Scott Maggs, CEO and founder of Skin Check Champions.

"Beach life is synonymous with Australian culture, but it's also where a lot of skin cancers can start... We need to send a clear message that skin cancer is real, and it can be stopped in its tracks if more people get their skin checked." Strip Off for Skin Cancer took place on Saturday, November 26 at Bondi Beach. Head to the installation's website for further information.