Attention all: it's the season of not having to sit huddled around one of those tall but ineffective heaters. The season of beer gardens has arrived once more, so throw off your woollies, uncross your arms, and start sticking to your seat because you're all sweaty. There's no shortage of beautiful beer gardens in Melbourne. From those with dog-friendly picnic tables to ones with fairy lights in the lawn, these Melbourne bars sport seriously applaudable backyards. We've rounded up the best beer gardens in Melbourne. Paradise Alley is the latest addition to Collingwood's multi-faceted dining warehouse on Easey Street. Hospo vet and owner Laura Twomey (ex-City Wine Shop) maintains the warehouse's roots in this massive open space but — perhaps best of all — the laneway doubles as a 35-seater beer garden, complete with potted plants and large-scale street art across every wall. The bar is serving up a rotating tap list of Australian craft beer, along with a small specialty cocktail menu and natural wines. For food, they're collaborating with neighbour Little Latin Lucy, who also resides in the warehouse and serves up Latin American street food with a Californian twist. Dishes can be ordered from the bar and include chipotle pork or smoked duck tacos topped with charred pineapple, lamb ribs and grilled whole fish. The Brunswick Green is true to its name in that it has a flurry of green fleshing out its beer garden, and feels like an oasis of nature in the middle of car/tram/bike heavy Sydney Road. They have a decent menu selection of beers, so head along for a few cold ones and a nice sit amongst the trees — there are large tables which are great for big groups or parties should you need them. The Brunswick Green is closed Mondays and cash only, so come Tuesday onwards post-ATM visit. 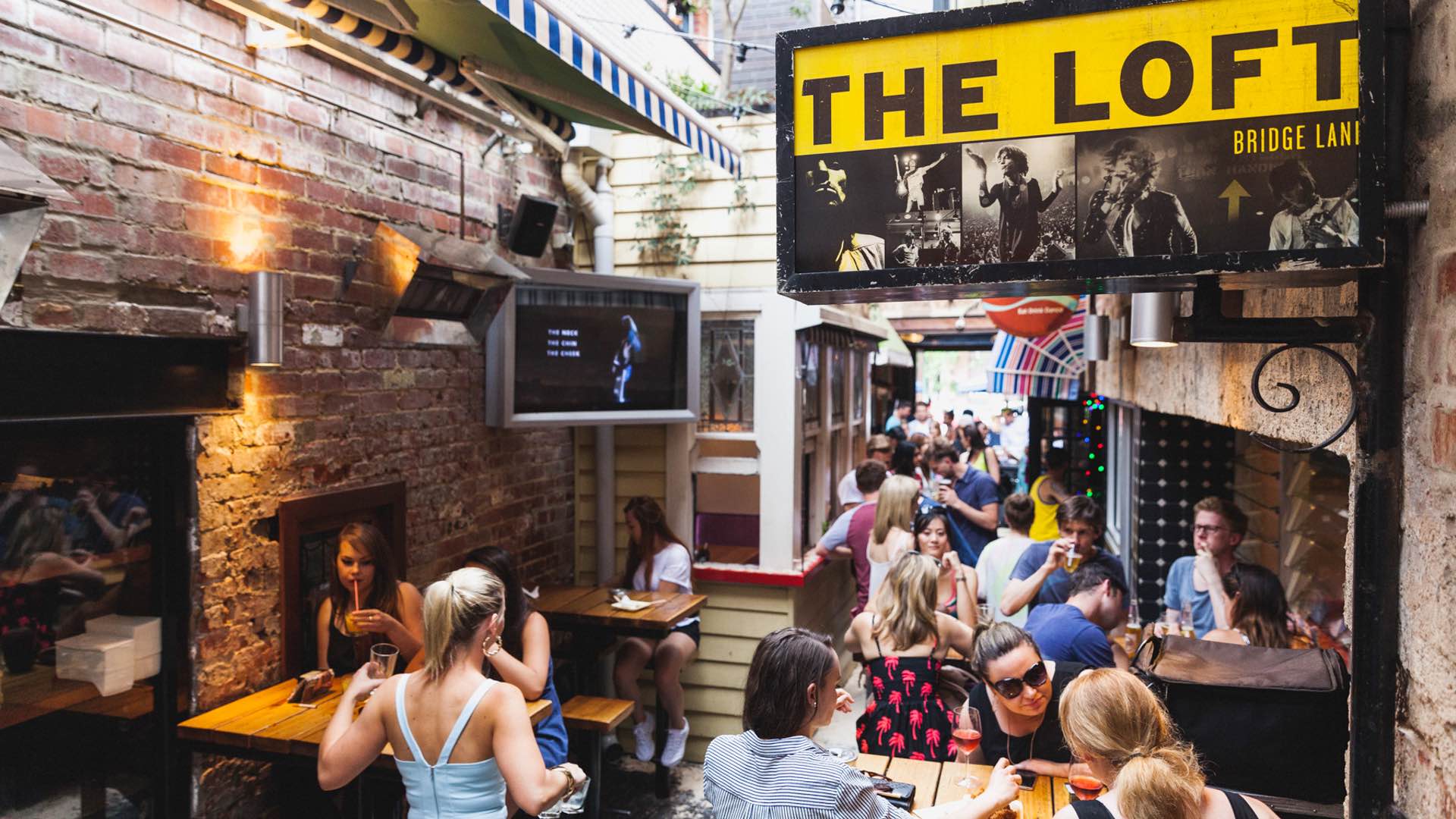 One of Richmond's many drinking institutions, the Bridge Hotel brings the outside in with a unique design and its great outdoor space. Split in two by a 50-metre-long cobblestone path, it's a traditional Victorian pub combined with individual spaces that have been themed as the types of bars and venues you might find in a typical CBD laneway. It's the best place to sip a cold bev on Bridge Road. Happy hours happen every Friday night from 5–7pm, with $4 pots, $7 pints and $7 house spirits. It's worth heading out Northcote way for a trip to The Wesley Anne, and not just for the $15 jugs (though that is a solid effort on their behalf). The venue plays home to live music, trivia, and everyone's favourite night of the week — pie night. The beer garden is warm, cosy and a nice place to rest and digest after your pie. Sit outside near their retro caravan and quirky décor. Melbourne's craft beer scene is a global contender, well deserving of a craft brewery dedicated to its culture. Stomping Ground Brewing Co.'s brewery and beer hall is just that. The massive brewery houses a 24-tap bar, a 2000-litre brewhouse and a beer garden with retractable roof. The famous Fitzroy Beer Garden isn't exactly suited for a quiet beer — it's more of a happening hub where you can sit out in the sun and eat delicious food, watch live music and grab a beverage. The beer garden is roomy with many seating options, and they have a $15 steak and wine special on Thursdays. In terms of beer gardens, they do know exactly what they're doing. The menu at Le Bon Ton is a veritable smorgasbord of meat, burgers and fried cheese. The food menu isn't all that suitable for vegetarians, but the bar menu more than makes up for it. The beer garden is perfect for a schooner on a Sunday afternoon. Candles, fairy lights and greenery over dinner — it's a piece of the American South down here in the Australian South, so let the good times keep rollin'. The Windsor Castle, or "that green pub on the corner", still has its famous neon pink elephants on the roof as its calling card — but more so is just a bloody good pub. As well as some "I really want to touch that" fancy wallpaper on the inside, there's also a ripper beer garden outside with heaps of canopy shelter thanks to an enormous tree. They do a free-range parma and some A+ eggplant chips for the less meat-inclined — but the best bit is it's out of the main drag of Chapel Street, so you can have a relaxing night in the garden. Nestled in the terrace-lined backstreets of Prahran, this southside pub and bistro is a dependable local that no doubt gives its neighbours some grief over the weekend. In addition to a main bar, dining area, public bar and bottle shop, the large astro-turf beer garden can house hundreds on hot summer days. While it can be pretty hard to get a table during their infamous Sunday Sessions, during the week this place is a relaxed little hideaway to grab a beer away from the hustle and bustle of Chapel Street. If you're hungry, there's some great specials on pub grub including a $12 locals' night on Mondays. Forget about pool. Your new favourite bar game is bocce, and Pallino in High Street, Thornbury is the perfect place to show off your skills. A variant on lawn bowls, bocce is a relaxed, fun game to play accompanied with a beer. Just try not to clobber any of the spectators, because those balls are heavy. When it's not doubling as a bocce court, the large astro-turf beer garden hosts DJs, outdoor movie nights and Pallino's regular Sunday Sessions. Footscray is no longer up-and-coming in Melbourne — it's already there. Venues like The Reverence helped, it's one of the best joints west of the city for live music, particularly of the punk and metal varieties. This massive watering hole boasts two separate band rooms with gigs on most nights a week along with a large and comfortable beer garden out the back. The outdoor space also doubles as a haunting ground for Jack, the Rev's resident Labrador who's always up for a pat. $3 Taco Tuesdays are the icing on the cake. 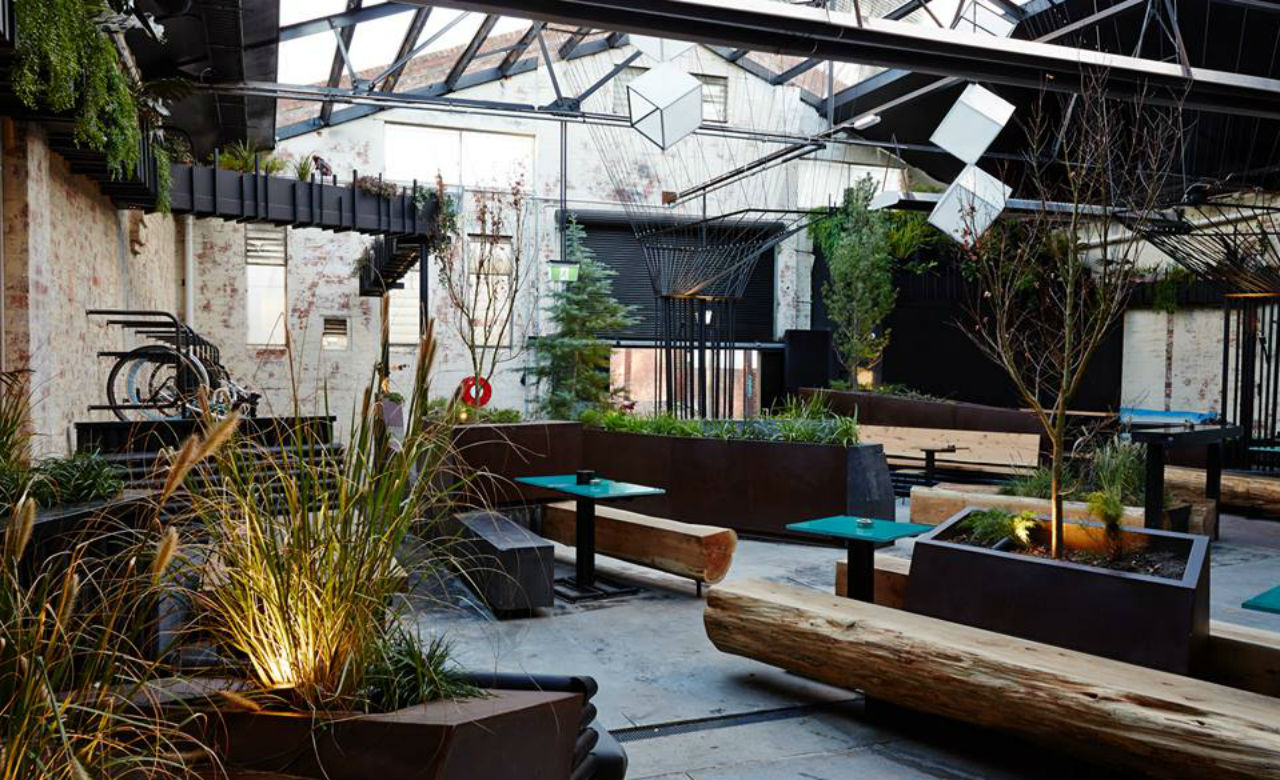 It's a bar, it's a hawker food joint, it's an exhibition space, it's a cinema. Frankly, Howler in Brunswick has got so much going on that it'd be surprising if they didn't have an awesome beer garden on top of everything else. With custom furniture, elaborate steel sculptures and illuminated cubes hanging in the air — not to mention its own bar and DJ booth — the huge, heated outdoor space at Howler is sort of what we imagine beer gardens of the future might look like. The menu skews towards Asian street food, the drinks list is plentiful, and you can even play some table tennis indoors. Even Fitzroy locals would be forgiven for not knowing this place exists. Strategically tucked away on a one-way road off Brunswick Street, The Standard seems to punch well above its weight. Inside lies a labyrinthine, tree-shrouded beer garden that's up there with the best of 'em. The bar offers a comforting retro vibe with accumulated clutter covering the walls and faithful old bar staff that seem equal parts dependable and intimidating. But outside is where you'll be spending most of your time — a breezy little oasis that's well worth the search. (NB: If this were a feature about parmas we'd be raving about their offering, but for now just trust us — it's good).