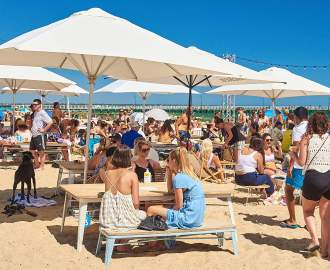 UPDATED Tuesday, January 19: After three and a half years on Fitzroy Street, Supernormal Canteen is now permanently closed. The Supernormal team are still running their flagship venue on Flinders Lane.

If you didn't know any better, you might assume that 157 Fitzroy Street is having a perpetual identity crisis. Since 2011, it's played host to Andrew McConnell's first solo project Golden Fields, his French-inspired bistro Luxembourg, and now Supernormal Canteen, a casual sibling to the chef's Flinders Lane restaurant. The thing is, they've all been bangers — McConnell just likes to keep things fresh.

His latest hit doesn't fall too far from the Supernormal family tree, though it's bringing plenty of its own personality to the table. With its check-the-box menus and buzzy crowd, it's cruisier, cosier and more Japanese than its CBD sibling — closer to that first taste of Supernormal you encountered when it debuted as a pop-up on Gertrude Street in 2013.

Familiar faces on the menu include the classic McConnell New England lobster roll ($16), returning to its roots six years after first melting hearts on the Golden Fields lineup. It's as good as ever, with that dreamy combo of warm brioche, cool salty lobster and creamy mayo.

But there's also plenty of new mates to play with, as the kitchen makes excellent use of its new hibachi grill. Perch at the bar and watch the smoky magic unfold before your eyes — flash-grilled duck heart yakitori, char siu pork neck, huge oysters grilled to silky perfection in their shells.

From elsewhere in the kitchen, slices of raw sea bream are elevated by crisp nashi pear, fresh wasabi leaf offering plenty of flavour tingles without the sinus punch of its pasty cousin ($15). There's a pile of crispy, crunchy school prawns doused with chilli flakes ($10) — team them with one of the bar's refreshing Yuzushu highballs ($12), close your eyes and it could be summer at any time of the year. It's the perfect drink and fried snack combo. Chicken and pork dumplings rock a gutsy vinegary chilli sauce ($14), and the hand-picked spanner crab with cos hearts and sesame is a party in a bowl ($18).

But none of them can prepare you for the flavour punch that is Supernormal's take on cup noodles ($14). What arrives in a cute ceramic version of the classic Nissin ramen throwaway cup, is unlike any soup noodles you've ever scoffed before. It's full-bodied, fragrant and will no doubt reduce your table conversation to a chorus of slurps.

Beers lean to the local and the crafty, though with Asahi's Super Dry ($10) and Dry Black ($12) gracing the taps, and an assortment of fun cocktails star ingredients like shiso, yuzu and fresh mandarin. And, from the same sommelier minds behind Supernormal's CBD wine collection, the vino offering here packs a punch of its own, with plenty of interesting by-the-glass options for when you don't want to commit to a bottle.

There's no telling how long McConnell sees Supernormal Canteen sticking around for. But given the broad appeal — it is a bit cheaper, a bit more casual and a bit more fun than its preceding iterations, after all — we're guessing it will be for quite a while.