The new 205-room Southbank hotel boasts a clutter-free look, views of Melbourne's skyline, a co-working lounge, and two bars — including one by the infinity pool.

Whether you're staycationing, vacationing or travelling for work, there are many reasons to pick a particular hotel over others — and how your temporary home away from home looks is right up there. Do you covet open, airy and minimalistic spaces? Sleek lines aplenty? The kind of modern elegance that catches your eye, but still looks functional? That's the remit of design-driven Marriott brand AC Hotels, which has just made its way to Australia.

Despite launching in 1999 — first in Spain under hotelier Antonio Catalan, then teaming up with Marriott in 2011 — the chain hadn't yet set up shop Down Under. Now, its sleek-looking first Aussie site is open for business at Southbank in Melbourne. Featuring 205 rooms within a sculptural tower that's marked by its geometric glass façade (and, by night, its shining LED lights), the new spot joins the brand's 195-plus hotels in more than 27 countries and territories worldwide. Popping up against the Fishermans Bend skyline, the towering exterior hails from DKO Architecture in collaboration with Capital Alliance — and views, both over the Melbourne CBD and the Yarra, are a big drawcard for guests.

As for where patrons will be slumbering, accommodation options span both rooms and suites, all decked out in neutral tones and boasting streamlined (but not restrained) design. Think: greys, whites and natural hues, stone tiling, textured timber floors, metal detailing, open closets and integrated bathrooms. The inspiration: the brand's Spanish heritage, and also South Melbourne's industrial warehousing.

Also, some rooms are pet-friendly — as long as your pooch is under 20 kilograms. 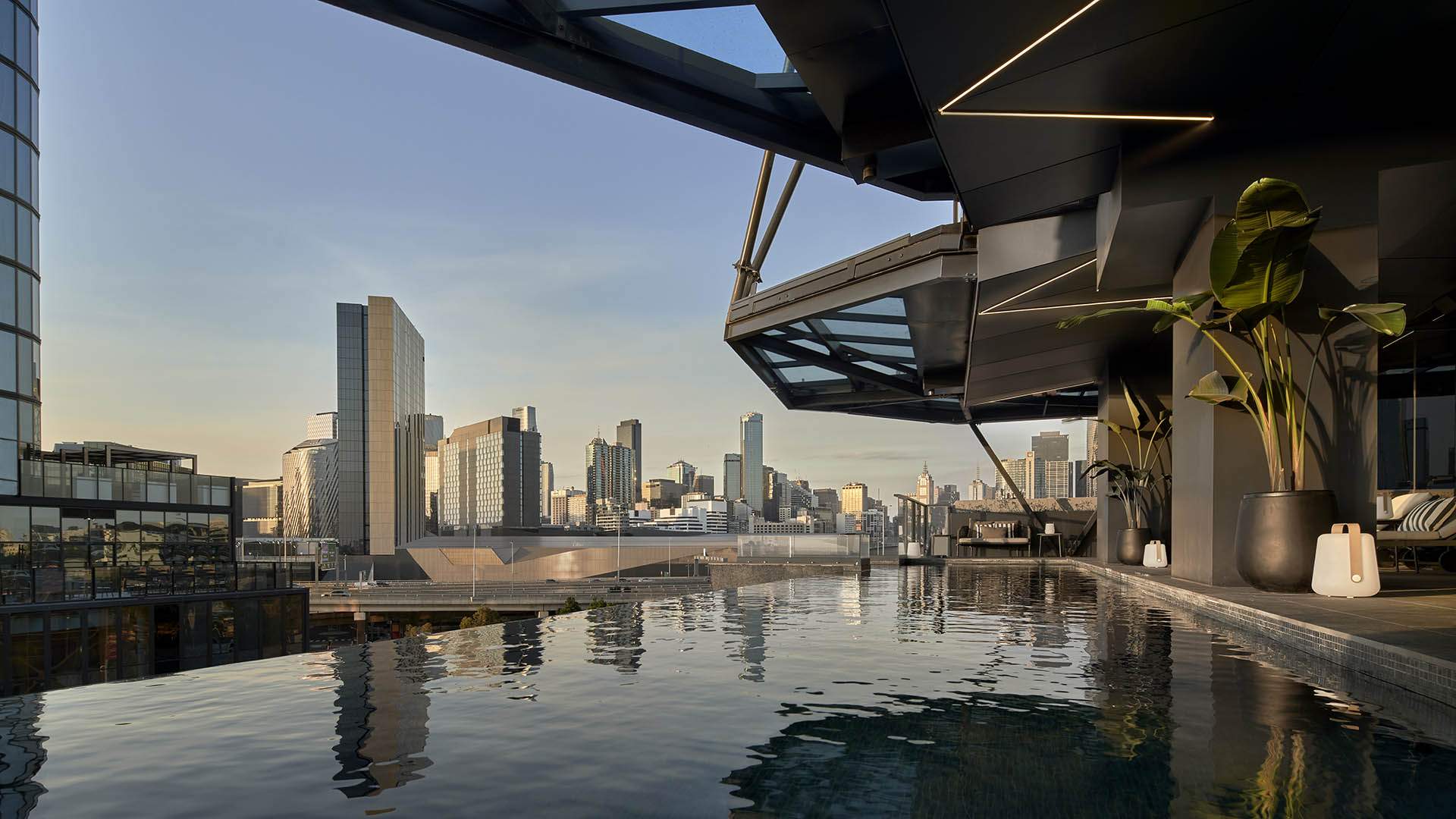 Part of the just-launched spot as well: co-working space AC Lounge, which'll also serve tapas at night; restaurant Sorolla, with an open kitchen for chef-watching while you eat; and Triana Bar, which goes heavy on soaking in the scenery. Drinks-wise, there's also a gin and tonic experience — a speciality cocktail that is served in a custom glass by sculptural glass artist Adam Walmon, and has "been scientifically developed to heighten the taste, aroma and palate experience for the drinker" — which is available in all of the hotel's dining and bar spaces.

For sips by the infinity pool — which runs the width of the building — head to Bar de Buceo. As well as drinks, it does al fresco dining.

And, the usual range of hotel amenities are covered, too, including a 24-hour fitness centre, plus a meeting and event space.

Find AC Hotel Melbourne Southbank at 201 Normanby Road, Southbank. For more information, or to make a booking, head to the hotel's website.