This savvy and funny new Craig Robinson-starring sitcom hails from one of the creators of ‘Brooklyn Nine-Nine’ — and you can stream it all now.

Killing It starts with a pitch. It's the first of many because that's just life these days, the show posits. Adding another sitcom to his resume after The Office, Ghosted and his beloved Brooklyn Nine-Nine guest spots, Craig Robinson keeps his first name as a Miami bank security guard with big aspirations — if he can rustle up some startup funds. His vision: owning a saw palmetto farm and living the American dream, because he believed his dad back when he was told as a kid that hard work and perseverance always pay off in the USA. For $20,000, he plans to buy land in the Everglades, then sell the fruit to pharmaceutical companies, who'll use it in prostate medicines for the lucrative health market.

First, Craig needs to convince his branch manager to give him a loan. So, when this new satirical series from B99 co-creator Dan Goor and executive producer Luke Del Tredici kicks off its ten-part first season, its lead is honing his spiel, certain he'll soon be rewarded for his efforts. But rejection comes quickly, bluntly and amid racist comments, all while someone who thwarts the rules waltzes in and nabs a rich payday. That's a contrast that Killing It repeats over and over, just like its slick speeches from ordinary people attempting to seize opportunities. The dreams seen are modest — not having to work nine different jobs is another — but there's always someone above them scheming or stealing their way to success, and being celebrated for it.

Striving for a better life, styling yourself to meet society's expectations, getting brutally trampled down: that's Killing It. It's a perceptive and savvily funny series about aiming for a shiny future to escape the swampy present, but getting stuck slithering in a circle no matter what you try. Or, as Craig's low-level criminal brother Isaiah (Rell Battle, Superior Donuts) puts it after seeing his sibling's legitimate endeavours flail again and again, it's about how the world is "nothing but snakes all the way down". Capitalism breeds serpents eating each other's tales if they're lucky, and devouring their own if they're not, the show suggests. That said, Killing It is still very much a comedy, and sees kindness and camaraderie as the antidote to the reptilian status quo. 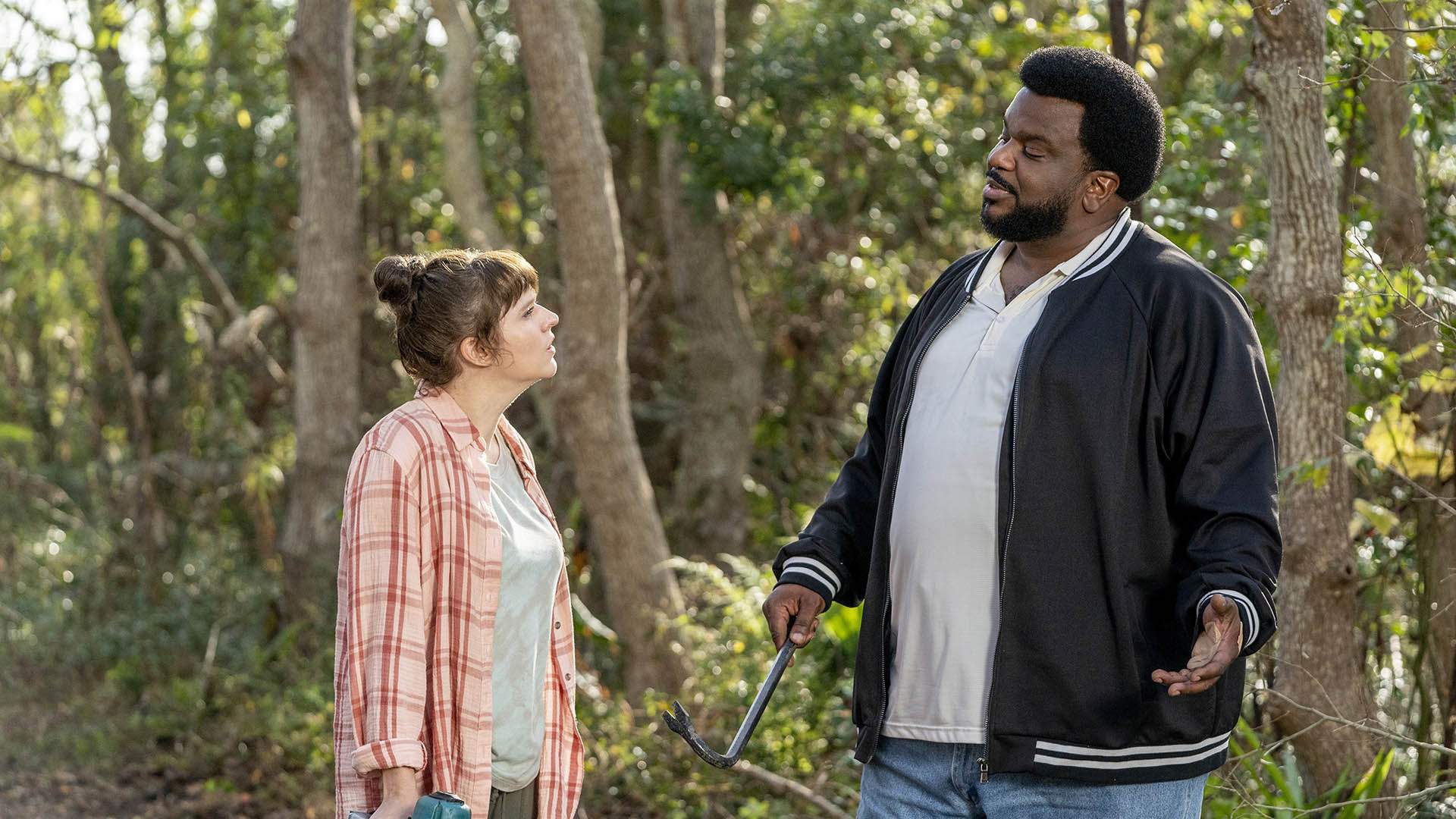 If The Good Place was wholly set in Florida and followed down-on-their luck folks chasing glory by slaying pythons, this'd be the end result. What it takes to be a good person — and what the point of even trying is in a world that stacks the odds against most — is a question that working on B99 has inspired twice now, given that The Good Place also sprang from one of the cop-focused sitcom's co-creators. That shouldn't be surprising when the power afforded law enforcement in America has become a key subject of debate recently. For eight seasons, Goor helped conjure up warm-hearted laughs via the antics of likeable characters who belong to a highly privileged profession. Now, he's unfurling US society's stratifications by honing in on everyday people who sometimes find themselves on the other side of the line, and rarely by choice.

Killing It's snakes are indeed literal, too, and a ladder to cash. After getting knocked back for the loan, Craig winds up in an Uber driven by Jillian (Claudia O'Doherty, Our Flag Means Death), a chatty Australian who makes a pitstop to casually swing a hammer at a python. It's a profitable business, she reveals. Also, there's a contest awarding $20,000 to whoever kills the most. Craig is reluctant to join in, but as more misfortune slinks his way, he soon has few other choices. Giving up on his dream isn't an option — and he's also desperate to show his ex-wife Camille (Stephanie Nogueras, Switched at Birth) and daughter Vanessa (Jet Miller, Young Dylan) that he's someone they can count on and be proud of. Clubbing critters and cutting into class inequalities mightn't seem an intuitive duo, but Killing It proves otherwise. Another of the series' crucial questions: what drives someone to spend their days wielding a nail gun at reptiles, or earning pittance for helping the ultra-rich avoid tax, or filming their snake-hunting exploits? The latter comes courtesy of fellow competition entrant Brock (Scott MacArthur, The Mick), who makes videos with his teen son Corby (Wyatt Walter, NCIS: New Orleans), has amassed a YouTube following of 150,000 viewers, and yearns for social-media stardom. He's Killing It's most cartoonish underdog, but also distills its essence perfectly. In a world where one-percenters and influencers reign supreme — getting away with their grifts scot-free, fetishising manual labour without dreaming of doing it, and treating the less financial as jokes, marks or pets — he's unashamed about diving in head first, but he's also constantly battling.

Of course, Killing It doesn't offer up any insights that haven't been covered in other 'eat the rich' fare of late, such as The White Lotus, Squid Game and Succession. But staring clear-eyed at the divides that have become an accepted part of western existence, recognising the struggle for anyone who wasn't born wealthy or faked it till they made it, and giving the whole situation an astutely comic spin works devilishly well here nonetheless. It helps that the series knows when to lean into absurdity, when to let its tender heart beat loudly, and how much cynicism to wind into its tale. There's ludicrousness, kindness and bleakness in each and every episode, even if setting the show around the 2016 US election feels unnecessary.

Robinson was bound to thrive in a comedy like this, and unpacks the swagger that's long been baked into his on-screen persona in the process. Always a delight to watch, Aussie comedian O'Doherty (Love, Sarah's Channel) is just as well-cast as the tireless but beleaguered Jillian, and gets most of the show's best lines and deepest moments along the way. They're an odd-couple duo, because Killing It eagerly draws upon a familiar formula, but their performances have plenty to say — and skewer — about simply trying to get by in unforgiving climes. It's no wonder, then, that it's easy to slide through and laugh along with the sitcom's snake-filled first season in one sitting, and to buy everything it's pitching.

Check out the trailer for Killing It below:

Killing It's first season is available to stream in Australia via Stan.