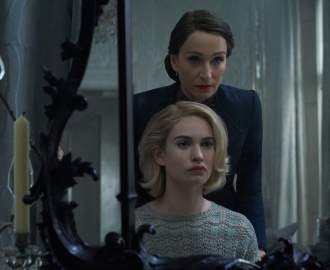 UPDATE, September 11, 2020: Colossal is available to stream via YouTube Movies and iTunes.

It may feature a giant creature lumbering around Seoul, but Colossal isn't your typical big predictable monster movie. In fact, there are plenty of refreshing ideas scurrying around within the latest film from writer-director Nacho Vigalondo, who previously taunted Elijah Wood through a computer in Open Windows, and now saddles Anne Hathaway with a lizard the size of a building. Come for the Godzilla-scale antics; stay for an insightful exploration of the destructive tendencies that lurk within us all, as well as an unexpected celebration of female empowerment.

When we first meet Hathaway's aimless, out-of-work writer Gloria, she's a partying mess. Tired of her drinking-all-night ways, her boyfriend Tim (Dan Stevens) kicks her out, sending her fleeing from New York City to her empty childhood home. Though it has been decades since she lived in the small town she grew up in, it doesn't take long for her to catch up with former school pal Oscar (Jason Sudeikis), become boozing buddies with him and his friends (Tim Blake Nelson and Austin Stowell), and take a job at his bar. Binging and benders come next, as does the news that a monster has been wreaking havoc on the other side of the world.

How Colossal expands its concept from there is one of the many joys best discovered by watching, but it's hardly a spoiler to say that battling demons, both internal and external, sits at the heart of the film. Connecting a trainwreck of a character with a gargantuan reptilian critter doing more damage than a railroad disaster mightn't be the subtlest metaphor, and yet Vigalondo ensures that the link between the two does more than just hammer home an obvious point. Indeed, examining just how one influences the other inspires narrative twists and emotional revelations, giving the movie the heart and smarts to match the size of its towering central figure.

Just as it does with its creature feature premise, though, Colossal takes its underlying ideas a step further. Noting that humanity – collectively and individually – can be as ruinous as a hulking kaiju is really just the beginning. It doesn't escape attention that Gloria is surrounded by a bunch of ostensibly well-meaning men who all think that they're helping; realising just how large a shadow they're casting upon her life is crucial to the story. Indeed, this movie doesn't just tear down a city. It attempts to topple gender politics as well.

Monsters, male domination and manoeuvring around both provide meaty food for thought, as well as a whole heap of meaningful material for Hathaway and Sudeikis to play with. Actually, their casting is a stroke of genius. Clearly given the lead role with a knowing awareness of how polarising she can be with general audiences, Hathaway fleshes out a protagonist who initially seems a stock-standard flurry of flaws, bad decisions and grating traits. Sudeikis also gets to toy with his usual persona, dissecting a character that seems on the surface like the kind of likeable nice guy he's played many times before. Just like the creature they're dallying with, however, there's more to each of them than it first appears.

It takes a particularly inventive way of thinking to weave all of the above together, and to deliver a mighty fine monster flick at the same time. Vigalondo's brain is clearly wired in just the right way. His love for all things kaiju shines through every time his creature makes an appearance, visually boasting more in common with the genre's B-movie roots than its slick Hollywood incarnations. Still, his affection for his intelligent concept and empowering message stomps harder. Talk about a colossal effort.