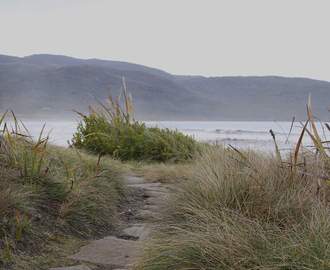 How to Spend 48 Hours on Bruny Island

In Unsane, Sawyer Valentini (Claire Foy) moves across the country to escape her stalker David (Joshua Leonard), but can't break free from his grasp. She still sees his face everywhere she looks. She still feels like she's unravelling. She still experiences flashes of pain and anxiety at inopportune moments — when a Tinder date is getting hot and heavy, for example. Alone in a new city, Sawyer seeks professional medical help, yet even that exacerbates her situation. Signing what seems to be a routine form, she's soon trapped in a mental health centre "for her own safety". Even worse, she spies David among the staff.

Directing his second feature following his short-lived retirement from filmmaking, Steven Soderbergh puts Sawyer through a recognisable ordeal. As scripted by Jonathan Bernstein and James Greer (in quite a departure from their previous work, the Jackie Chan vehicle The Spy Next Door), the movie takes a leaf out of the well-thumbed psychological thriller playbook. Or does it? Surprises are part of the film's nightmarish world, as well as the genre that it knowingly fits into, but Unsane isn't just a chip off the old block. It slides smoothly into Soderbergh's filmography — in fact, if his 2013 flick Side Effects met his excellent TV series The Knick, it might look something like this. More than that, Unsane pairs a savage takedown of America's profits-before-patients health system with an equally sharp take on society's treatment of women.

Specifically, Soderbergh and company dive into the mindset of someone who has been violated and attacked, providing a devastating expression of a victim's fraught, overwhelmed viewpoint. The film's plot continues to set the appropriate scene, pitting Sawyer against hostile doctors, nurses and cops, as well as her stalker, with allies few and far between (Amy Irving plays her mother, while Jay Pharoah pops up as a fellow detainee). If it sounds broadly familiar, that's by design. Here, a woman is harassed through no fault of her own, and is stuck reliving the trauma. She's subjected to unwanted attention from her assailant, and is scrutinised by the powers-that-be when she tries to take control. Further, when she asks for assistance, she's left at the mercy of a system that's complex at best and oppressive at worst.

Indeed, Unsane's biggest shock doesn't spring from anything in its narrative, even when the film toys with reality. Instead, what's truly astonishing about the picture is how effectively it relays its perspective. The twists and suspense all work swimmingly, keeping the audience on edge throughout, but figuring out what's true or false is really beside the point. What matters in Unsane is how Sawyer is made to feel over and over again, and how the movie conveys her emotional and mental agitation to the viewers.

Who, under intense stress, hasn't imagined something they definitely didn't witness? Who, in the same circumstances, hasn't felt like they're being watched? Who hasn't questioned their own sanity? Who hasn't felt hyper-alert, physically reacting to everything and everyone around them? In bringing these aspects of Sawyer's turmoil to the screen — and making her anguish seem to seep from the screen — Soderbergh's decision to shoot the film on three iPhone 7 Plus handsets is particularly astute. Every shot is intimate and urgent, as well as both voyeuristic and claustrophobic. Each visual composition feels heightened, frequently positioned at a slightly askew angle and often keeping part of the frame out of focus. Every image looks gritty and grim, even bordering on unpleasant. Crafting a literal picture of distress, the director (who also acts as his own cinematographer and editor under different pseudonyms) matches his style with the movie's substance, in an inventive filmmaking masterclass.

Regardless of who Soderbergh was pointing his camera-phones at, his shooting technique would've hit the mark. But with Foy on the other side of the filmmaker's jumpy handheld lens, Unsane hits home hard. Far removed from the drama and glamour of The Crown (and with the American accent to prove it), the actor's performance couldn't be less regal. It also couldn't be more committed or compelling. The movie itself might come packaged with a pulpy tone, but the uneasy look in Foy's eye, the jitters in her hands and the stiffness of her stance speak to something more than lurid thrills. In fact, as this powerful film makes plain, they've stared back at many a viewer from their own mirrors.