Seven First-Class Bars and Restaurants to Visit in Hawke's Bay

You really are spoiled for choice when it comes to eating and drinking in this east coast winemaking region.

As well as serving as the country's oldest and second largest winemaking region, Hawke's Bay is regularly floated as 'the fruit bowl of New Zealand'. Thanks to its consistently warm and dry climate, the east coast region is overflowing with producers. It also counts more than 200 vineyards, 70 wineries, 30 cellar doors and restaurants, bars and cafes across its ranges, hills and plains. You really are spoiled for choice when it comes to eating and drinking in the region.

So you can jump straight in with a knife and fork, we've rounded up seven first-class bars and restaurants to tick off on your next visit to food and wine country. You can't visit Hawke's Bay without dropping into a winery, so why not start with the oldest in New Zealand? The landmark Mission Estate, which was established almost 170 years ago by French missionaries, is a place to submerge yourself in winemaking history and sip on premium drops in the process. A visit to the former seminary building in Taradale should begin with a quick trip to the cellar door. Here, 30-minute sit-down tastings work through six seasonal releases from the winery's more premium tiers. While you swirl, sniff and sip the likes of sparkling cuveé, barrel-aged sauvignon blanc and sticky late-harvest dessert wine, you'll also hear about the history of the vineyard and its founding Catholic brothers who, all those years ago, used the site to make sacramental wine. The $10 tastings include all that plus your own Mission Estate glass to take home. If your tasting session extends into lunchtime, there's a restaurant next door where you can nurse your favourite varietal. A self-guided stroll around 'La Grande Maison' and the picturesque grounds is an absolute must, too. An oversized neon asking 'Who shot the barman?' serves as the guiding light to Napier's Monica Loves. Tucked away off the main drag of Tennyson Street, the pint-sized laneway bar is a popular destination for pre-dinner cocktails and local wine — or late-night kick-ons as live entertainment fires up on the weekend. If you haven't locked in dinner plans, the kitchen serves up a tapas-style menu spotlighting local suppliers. Take your pick from small plates of lamb wontons, crispy squid, fish tacos and eye fillet crostinis. When relocating from Palmerston North to Hawke's Bay experienced hospitality couple Steve and Sarah Kelly found that the heart of Napier was lacking a modern bar and eatery. Shortly after, Market St was born. The pair took on the space formerly known as The Cri to create the "fun not fussy," establishment, which manages to serve both stand-up and sit-down diners comfortably. The bar serves DB Breweries' core range of wine and beer, as well as a range of oversized cocktails. You certainly won't be thirsty when ordering the house negroni. The menu has its heart in gastropub fare, from milk bun burgers to potsticker dumplings, bacon-wrapped chicken breast and steak frites. For those after a little bit of everything, there are plenty of tasting platters and grazing boards to choose from, including one entirely dedicated to sausages. In the summer months, head straight for the spacious openair courtyard to enjoy your snags. This modern wine bar wouldn't be out of place on the streets of Paris. Strings of twinkling fairy lights hang above the kerb-side al fresco area, while the colourful frontage immediately indicates that this venue is as much about art as it is about wine — it's named after famed artist Henri Matisse, after all. The owner of the eclectic Matisse Wine Bar believes that a great wine is a piece of art, has the ability to tell a story about a terroir and a winemaker's philosophy, show human creativity, skills and imagination. On the extensive wine list — around 300 picks — you'll find interesting drops from boutique producers around the region and further beyond. The attached off-license wine shop at the rear of the venue is where you can take a tour of Austria, Hungary, South Africa and France. It's not all about wine in Hawke's Bay; there are several brewers leading something of a craft beer revolution in the region. Since its launch as a backyard operation in 2014, Brave Brewing is now one of the most popular local producers. The business run by Matt and Gemma Smith was born from the desire to take their home-brewing hobby to the next level — the pair's new taproom and eatery in Hastings' Herald-Tribune development makes that dream a reality. The family-friendly neighbourhood diner is a popular spot to sample the brewery's range of flavourful beer. The flagship 'Tigermilk' IPA should be your first port of call, then quickly followed by the Munich-style lager and the 'Brave' milk stout. Chef Brad Simpson brings his experience to the kitchen after working in high profile restaurants across the ditch. His fresh flavour-packed menu comprising Southern fried chicken, to-the-point burgers and loaded hotdogs is just what the doctor ordered to soak up all those suds. 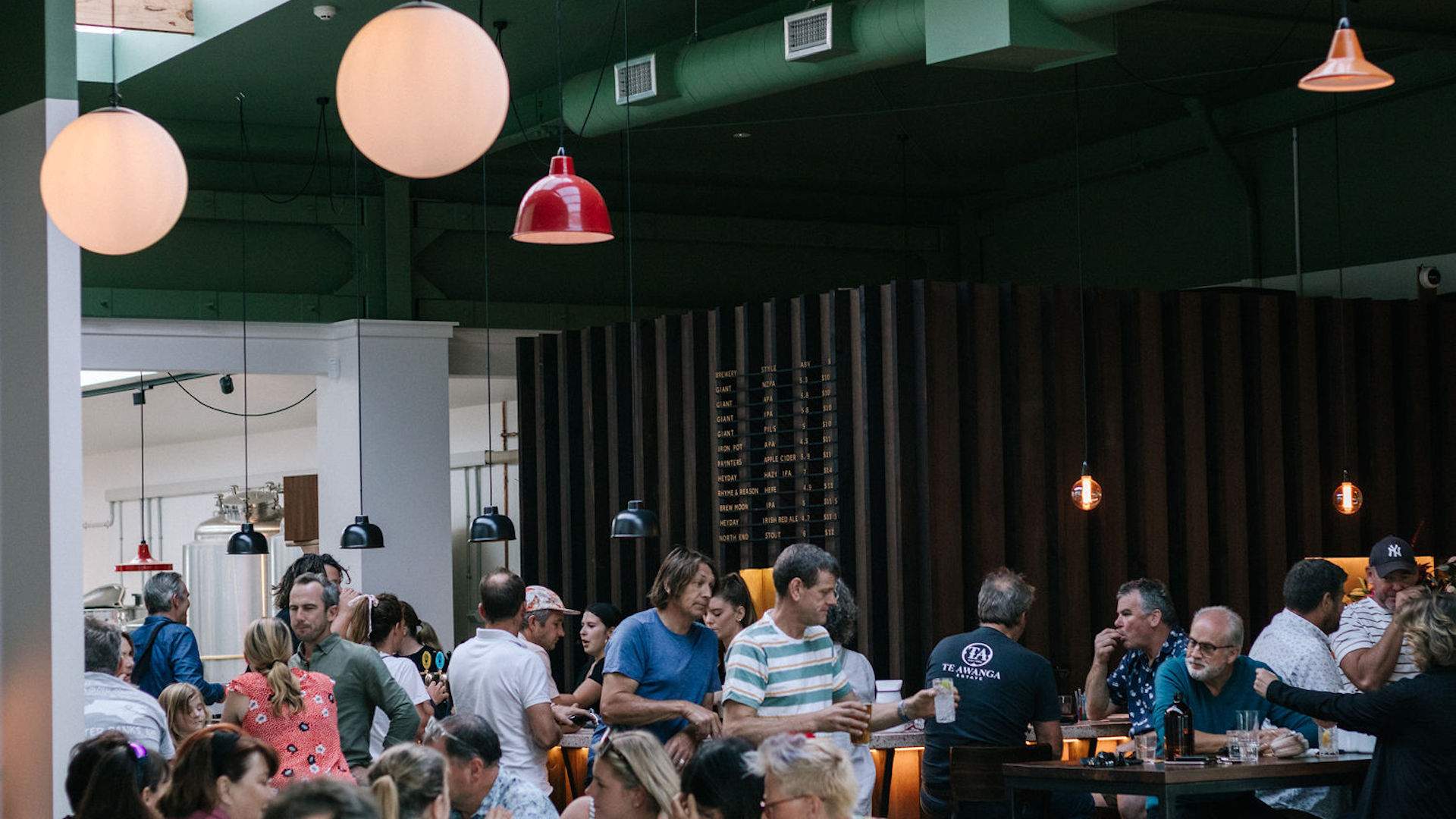 The Giant Brewing freehouse is a modern interpretation of a classic brewpub run by two brothers and a mate — namely journalist-turned-brewer Chris, coffee roaster Tom, and production exec George. The trio's Havelock North local has been the spot to sample the brewery's core range of craft beer since it opened last December. The space has come a long way since its former days as a Subway; fresh local artworks adorn the minimalist walls and a handcrafted concrete bar top serves as the base of operations. On the tap list you might find Giant's refreshing European-style pilsner, a fruity India pale ale or a smooth coffee mocha stout. A rotating guest list of brews from other New Zealand independents — like Heyday, Sunshine and Eddyline Brewing — fill out the rest of the diverse lineup. For grub, the brewpub has partnered with Good Company Catering who keep punters charging with the likes of gravy loaded chips, barbecue pork ribs, hawker rolls and burgers. Found in Havelock North's Joll Road development, Piku Restaurant and Cocktail Bar serves fresh and modern Japanese cuisine. Owner Ben Harper took inspiration from London's Japanese scene for the sharing plate restaurant. Two kitchens and a bar operate inside the L-shaped venue; the corner of the bright dining room serves as a sushi and sashimi station, while the back engine room pumps out hot dishes between robata charcoal and hibachi grills. From the current menu you can sit down for wagyu meatballs served with satay noodles, a selection of yakitori skewers and over-flowing steamed buns. Finish your meal with a fresh coconut panna cotta, macadamia tart or something both sweet and boozy from the selection of dessert cocktails.