Ten books to get stuck into by the pool, the beach or on the couch with an Icy Pole in hand.

All year, you might have been bookmarking, dog-earing, Evernoting, Goodreads-saving a towering pile of books to read with all that spare time you never seem to properly find on a weekend. It's often a lofty idea, spending a few hours, hours, doing nothing but perusing a solid narrative on your sand-flecked beach towel, shaded by your nifty new beach tent. But folks, summer's officially in full swing and unless you work in radio broadcasting or public transport you're probably about to land yourself with a good few days of holiday lazing. Grab one of our favourite new releases and make yourself comfortable — we've been churning through Man Booker Prize winners, hilarious biographies and homegrown coming-of-age tales aplenty. For a book recommendation you can trust (sorry lusty Aunt Beryl) you won't be disappointed by this year's Man Booker Prize winner The Sellout by Paul Beatty. The plot follows an African American's plight to reinstitute segregation and slavery into his hometown of Dickens (yes, you heard that correctly.) Naturally, it's a satire and Beatty uses his well-developed wit to broach the thornier issues of racial identity, injustice and legacy. Hilarious, sometimes uncomfortably so. Get it before it does actually sell out.  — Erina Starkey DO NOT SAY WE HAVE NOTHING BY MADELEINE THIEN

If you don't know much about China's Cultural Revolution, you're not alone. It's been half a century since the movement was launched by then-chairman of the Communist Party Mao Zedong, and accounts of what actually happened are hazy; many of them have been suppressed or altered. Madeleine Thien's new novel delves into one part of this tragic time in history, namely the persecution of musicians at the Shanghai Conservatory of Music. The book switches between the narration of Li-ling, who is growing up in Vancouver in the '80s and '90s, and the complicated narrative of her father's life in China during the revolution she is piecing together after his death. For such tragic subject matter, Thien is incredibly eloquent and at times even surreal in her writing. It results in a book that is one hell of a compelling read as well as an important incidental history lesson. — Lauren Vadnjal THANKS FOR THE MONEY: HOW TO USE MY LIFE STORY TO BECOME THE BEST JOEL MCHALE YOU CAN BE BY JOEL MCHALE

Have you been holding back, not fully realising your potential as the best Joel McHale you can possibly be? Well, put your own unique personality aside for a high-achieving second and brush up on life skills from the Hollywood gadabout behind Community's Jeff Winger. This tell-all memoir's so ambitious and life affirming, it has a trailer. Watch it, or perish in your Joel-McHale-machete-slicing-a-watermelon-midair-less existence. Chapters delve into boyhood head injuries, almost killing Chevy Chase and parental sex lives — you've been warned. — Shannon Connellan THE SECRET HISTORY OF TWIN PEAKS BY MARK FROST

It's happening again. That show you love really is coming back in style. Twin Peaks fans have waited 25 years to dive back into David Lynch and Mark Frost's television show, and while the third season won't reach screens until 2017, the latter has gifted us the perfect stopgap. Every one of The Secret History of Twin Peaks' 362 pages is filled with a dossier of details, secrets, and other tidbits that make the town, its mysteries and its eccentric inhabitants even more intriguing (and, just like the owls, little here is what it seems). As a bonus, why not pick up a copy of unauthorised Twin Peaks cookbook Damn Fine Cherry Pie too, and get some Twin Peaks-themed kitchen inspiration. Cherry doughnuts, fish percolator supper or fire walk hot tea smoked salmon, anyone? — Sarah Ward Swing Time, Zadie Smith's latest novel, sees the award-winning author trying a few new things. It's her first book with a first-person narrator and it's set partly in West Africa — a departure from her other novels that are primarily set in the US and UK. Like all Smith's books, Swing Time offers a poignant reflection on the messy nature of human relationships and asks a lot of thought-provoking questions. Lyrical, witty, and enthralling, this is a holiday read you won't be able to put down. — Yelena Bide Seinfeldia is a tribute to those who erect a festivus pole every December. It's for people who can't look at a marbled rye loaf without feeling awkward. It's for those of us who make subtle references to the Bubble Boy, the Soup Nazi and the anti-dentite as if its the most natural thing in the world. Written by Jennifer Armstrong, Seinfeldia documents the evolution of one of the most popular sitcoms to grace our TV screens. Armstrong examines its progression from banter in a Korean supermarket, to an unknown struggling sitcom at the risk of cancellation, to the show that has permeated its way into popular culture, decades after it was conceived. The book examines the real-life inspirations for the quartet, and the evolution of the characters (ahem) quirks, as well as the one-off characters who built their careers around their Seinfeld roles. — Natalie Freeland 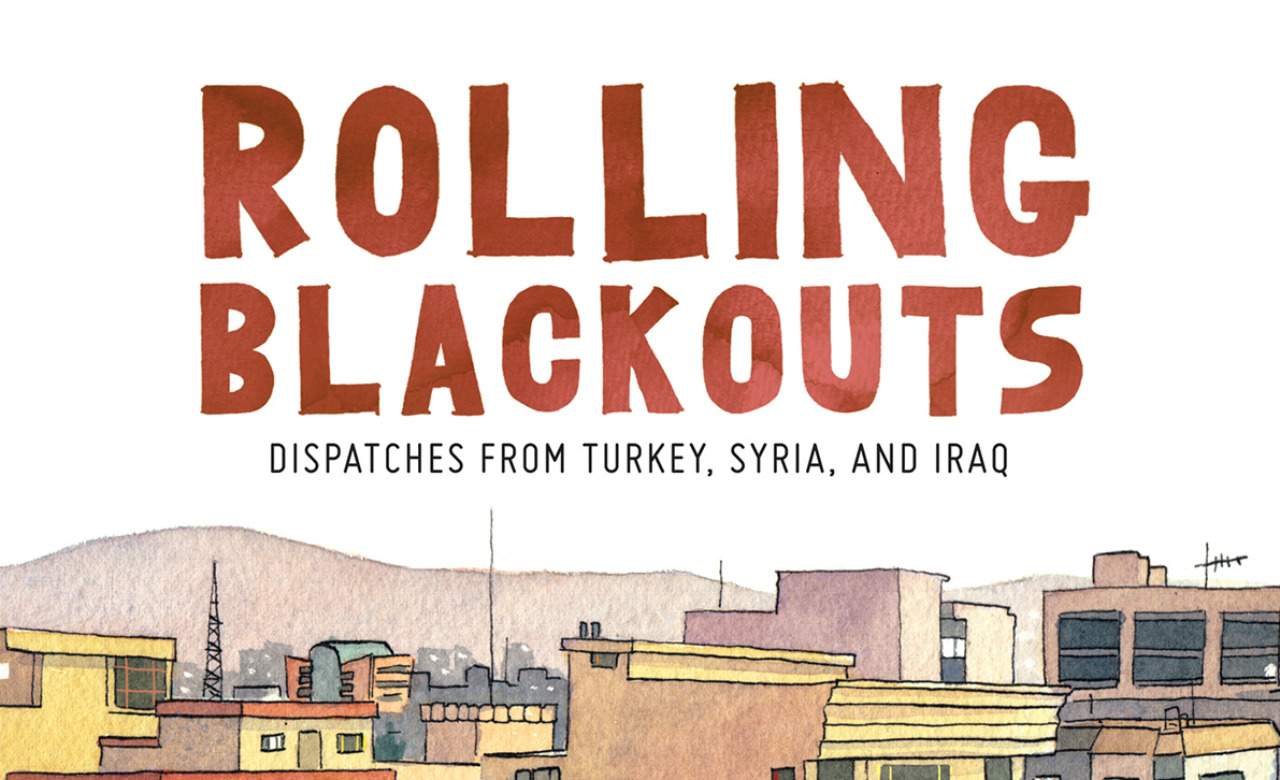 Rolling Blackouts is comics-journalism nonfiction by author and artist Sarah Glidden, who follows her news-gathering friends from the Seattle Globalist across 2010-era Turkey, Iraq and Syria. Glidden's reporting flips the camera, showing the harsh dilemmas involved in covering people in danger, working low-budget news and pushing distant editors to publish unsexy, important stories. But this meta-journalism approach is strongest when it takes you behind the scenes of actually getting interviews: the interviewees' aspirations and desperation in talking to reporters, their misgivings and rational anger. Parts road trip, reportage and quick-read comic. — Zacha Rosen THE RED WAKE BY KURT JOHNSON

Russia and the USSR is an area that has always felt complex, gritty and interesting to me, and with some old Cold War sentiment creeping back into the news I was super glad to find myself working on a book that took me right to its red heart. The Red Wake draws you in with personal anecdotes and beautiful description and sends you on your way knowing a hell of a lot more about the complicated social and political history of the area, in the style of Anna Funder's Stasiland. More than anything, this book made me want to travel around Russia and the 'Stans, through bleak grey towns still riddled with the bullets of uprisings, to the ruins of Pripyat near Chernobyl, to try to catch a glimpse of a rocket launch in the Kazakh desert, and to a town where abandoned fishing trawlers sit on the now dry bed of the Aral Sea, a gulag or two in the distance. — Lex Hirst (Disclaimer: Lex Hirst works for Penguin Random House, the publisher of this book.) OUR MAGIC HOUR — JENNIFER DOWN

Our Magic Hour, the debut novel from Melbourne writer Jennifer Down, is an affecting story of the harsh realisations occasioned by our mid-twenties. Audrey, a cool girl in the truest sense, loses her best friend to suicide, and travels from Melbourne to Sydney and back again, in a journey that mimics her attempts to grasp and process this life-altering event. Down writes equally of significant moments and unremarkable days with sparing beauty. Particularly adept at depiction of place, Down made me wonder if I hadn't sat across from Audrey on the train to Redfern, bumped elbows with her at a bar in Bondi. Down is the kind of writer that you'll be lucky to get on at the ground floor with, she is only going up. — Maggie Thompson. Set in the small coastal town of Almería in Southern Spain, amidst the hot desert sand and jellyfish-filled ocean, Hot Milk follows Sophie and her mother Rose as they visit the famed Dr Gomez and his assistant Nurse Sunshine in the hope of uncovering the mystery of Rose's ailing health. This hard-to-put-down novel has a hilarious undertone of sly humour, an enigmatic cast of characters, and a vividly painted landscape that will ensure that even if you can't make it to the beach this summer, Hot Milk will take you there. It's a cracker. — Katie Mayor. Have you ever noticed how much Brad Pitt eats in his movies? He's like some sort of human garbage disposal, slamming down burgers, cookies, chips, Twinkies and whatever else he can find into his (perfect) cakehole. He eats without restraint, without delicacy, as we all should sometimes, and for that reason he's the central figure in a new cookbook called (appropriately but incorrectly) Fat Brad. The team from Long Prawn have collaborated on the project with photographer Ben Clement, PractiseStudioPractise, Tristan Ceddia, Ali Currey-Voumard and Mietta Coventry. The cookbook is a tongue-in-cheek collection of recipes based on Brad's most iconic food moments on film. You'll find instructions for a knuckle sandwich (Fight Club), game bird with taters and Guinness gravy (Snatch), Bellagio Shrimp Cocktail (Ocean's 11), roast turkey drumstick and Grecian salad (Troy) and bloodied roast (Mr and Mrs Smith) amongst others. As well as being straight-up hilarious, the Fat Brad cookbook is also just a really good looking (like its namesake) addition to your cookbook shelf. It's the first in a series of pop culture cookbooks by the Long Prawn crew, so keep an eye out and grab your Fat Brad: The Cookbook here. — Imogen Baker

Published on December 23, 2016 by Concrete Playground