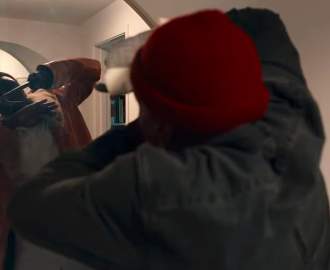 Sorry, fans of Twilight — the most fascinating thing about the terrible vampire franchise is the haunted look in Kristen Stewart's eyes. If you were being particularly unkind to the blockbuster saga that catapulted her to superstardom, you might incorrectly call that expression boredom, but the same gaze has lingered in much of the actor's work since she stopped cuddling up to a fanged Robert Pattinson. It's the look of someone grappling with deep-seated uncertainty and conflict — that is, the type of character that has marked Stewart's superb post-Twilight roles in Clouds of Sils Maria, Personal Shopper and Certain Women. And, after a big-budget detour through Charlie's Angels' average action antics, plus dismal Alien ripoff Underwater, it's an expression she once again sports with purpose and potency in biopic Seberg.

Jean Seberg, the American actor plucked from a talent search by director Otto Preminger when she was still a teenager, then cast in the starring role of Joan of Arc in her very first film, also had that same look. It's evident in her famed debut performance in 1957's Saint Joan, in her melancholy turn in Preminger's Bonjour Tristesse, and in French new wave masterpiece Breathless, the movie that cemented her place in cinema history. As Seberg shows through Stewart's dynamic yet quietly anguishedportrayal, however, that gaze became a constant off-camera as well. Focusing on a mere sliver of her career, rather than charting its eponymous figure's birth-to-death story, this engaging, intriguing thriller illustrates why a star who was acclaimed and adored across two continents came to brandish such inner sorrow — and why that, and not her career highlights, has earned this involving film's attention.

Charting scandals of both the political and personal kind, infuriating government espionage and America's heated racial divisions, this twisty true tale was always going to make it the big screen. Set against the backdrop of Hollywood's fading heyday — the same period that Once Upon a Time in Hollywood chronicled so well so recently — it's the story of a woman punished, like the causes she fought to support, for refusing to remain in her place. Seberg is already an international star when the movie that bears her surname begins. It's 1968 and, following her first big roles, she has spent almost a decade setting up a life in Paris. At the urging of her agent (Stephen Root), she flies back to the US to make a few undemanding genre movies, only to fall afoul of the FBI as soon as she steps onto the tarmac.

Seberg's crime? Being sympathetic to Black Power activist Hakim Jamal (Anthony Mackie) while they're in the air, joining him in a raised-fist salute when they hit the ground and — despite the fact that she has a husband (Yvan Attal) and Jamal has a wife (Zazie Beetz) — falling into bed with her new friend as well. Already surveilling Jamal, the FBI starts bugging Seberg too, tasking tech-savvy newcomer Jack Solomon (O'Connell) and heavy-handed veteran Carl Kowalski (Vince Vaughn) with listening in on her every move. As she donates to Jamal's civil rights efforts, using her status to draw attention to his cause, the government decides that she's an enemy. Through the tabloids, she's also easy to torment, discredit and destroy publicly. As the FBI's tactics ramp up, Seberg understandably reacts, while Solomon questions the morality of this state-sanctioned persecution.

It's by no means a criticism of O'Connell that his storyline proves Seberg's weakest link. Whether his character is eavesdropping on his target or arguing with his medical student wife (Margaret Qualley) about his long hours, the Skins breakout turned '71 and Money Monster star is reliably excellent — but his part of the narrative always feels superfluous. In a tale about law enforcement secretly and maliciously harassing a real-life famous actor because the powers-that-be dislike her political affiliations, it's the victim that's of far greater interest, not the agony felt by one of the fictionalised perpetrators. That's doubly the case with an iconic figure such as Seberg and with such a tragic true story, something that screenwriters Joe Shrapnel and Anna Waterhouse (The Aftermath) occasionally seem to forget.

That said, O'Connell's character does serve an important purpose, anchoring the film's visual approach. By giving Solomon's work-mandated spying such prominence, Australian filmmaker Benedict Andrews (Una) and Oscar-nominated cinematographer Rachel Morrison (Mudbound) give their movie an observational air, like it's surreptitiously peering at Seberg's most intimate moments as well. And that look and feel is essential. Helped by top-notch production and costume design — Seberg's hilltop Los Angeles house is all windows, boxing her into a glass cage above the world, for example — Seberg steals a meaningful glimpse at the woman behind the celebrity, smears and scrutiny. It stares deeply and carefully, seeing that haunted look that Stewart wears so commandingly, and demonstrating why that tortured gaze says everything about Jean Seberg.