Installations of a field of 3000 flowers, alien-like mushrooms and vast array of peculiar yet beautiful creatures will let you explore the intricacies of the acclaimed artist's mind.

In Patricia Piccinini's mind, bulbous creatures float through the sky. In her imagination, automobiles may as well be animals, and the line between humans and other critters is razor thin. It all sounds like something out of a science-fiction movie (or several), but the Australian artist's output isn't just confined to a screen. Across a variety of media, Piccinini explores the way that nature and technology, people and animals, and the unusual and the sublime all combine — and, more than that, she finds ways to make their weird and wonderful blend appear, feel and seem real.

With Piccinini's body of work spanning from figures that look so naturalistic you'll expect them to start moving, to looping short film installations that bring strange beings to life, to paintings and sculptures made with actual human hair, wandering through her creations is like wandering into another realm. At Brisbane's Gallery of Modern Art until August 5, that's exactly what's on offer. Taking over the entire ground floor of the building — and filling the place with more than 70 sculptures, photographs, videos, drawings and large-scale installations, including both exisiting favourites and newly commissioned pieces — Patricia Piccinini: Curious Affection transforms GOMA into a pleasingly intriguing playground.

Indeed, if Piccinini's famous animal-shaped hot air balloon, The Skywhale, literally unleashed her unique sensibilities out into the world, then Curious Affection does the opposite: it invites everyone into the acclaimed artist's mind and lets them roam around. Inside, visitors get a peek at not-quite-human lovers cosying up in a caravan, walls filled with alien-like mushrooms, and a vast array of peculiar yet beautiful creatures. And, in an exhibition designed to make you ponder what it means to be human, that's just a fraction of its treasures.

In short: entering the otherworldly showcase is an experience like few others, crafted by an artist who has taken her visibly distinctive sensibilities everywhere from the Venice Biennale to Japan's skies to galleries around the world over the past two decades. Discovering exactly what her imagination has brought forth is part of the fun, but here are five things to look out for along the way — and, whether you're a Brisbanite keen on an arty staycation or you're travelling from interstate to see the exhibition, we've found you somewhere to stay as well. WANDER THROUGH A FIELD OF OTHERWORLDLY FLOWERS

The Field isn't the first thing you'll see at Curious Affection, but this darkened room will stay with you long after you've left GOMA. It's the exhibition's main attraction for a very good reason: there's nothing quite like walking into a cavernous hall filled with more than 3000 flower-like sculptures, lightly bouncing along the spring-loaded floors and finding out that nothing's really as it seems. Each individual stem is a feat of astonishing artistry that'll make you think about the real meaning of beauty, not to mention the kind of creations that sci-fi filmmakers like Ridley Scott (Alien) and David Cronenberg (The Fly) would be proud of. When you're not staring into their hypnotic expanse, the four larger-scale sculptures — two of mothers with children, two of curious creatures — scattered around the gallery are just entrancing, not to mention perfectly on-theme. ENTER A GARDEN SHED — AND LOOK UP

Maybe you saw The Skywhale float through the sky back earlier this decade. Maybe you just wished you did. Either way, if you ever wondered what it looked like inside, then inflatable installation Pneutopia almost has the answer. It's not Skywhale 2.0, but this custom-built blow-up creation comes close — just confined within GOMA's huge two-storey hallway rather than roving free on the wind. Roam around either the ground or second level, and you can feast your eyes on the outside of this billowing orange and pink structure. Enter the ordinary-looking garden shed underneath, however, and you'll peer through a window into the heart of the balloon. GET UP CLOSE AND PERSONAL WITH CURIOUS CREATURES

In one corner, a girl sits with an owl flapping over her shoulder. At several other points around the exhibition's first few rooms, kids reach out to strange critters, or cradle them in their arms, or find them laying on their backs. On a leather platform, a pig-human chimera feedings her suckling offspring. In a life-sized bed, a toddler stands shoulder-to-shoulder with a creature that could've stepped out of her dreams (or nightmares). There's more where they came from, representing some of Piccinini's best-known sculptures, and they really are the best introduction to the artist's work that you can get. Each attention-grabbing piece makes a statement, whether about natural evolution, genetic experimentation, the open mind that comes with child-like wonder, or the fine line between horror and empathy. As the exhibition's explanatory text describes, it's a collection that's "startling but rarely fearsome". 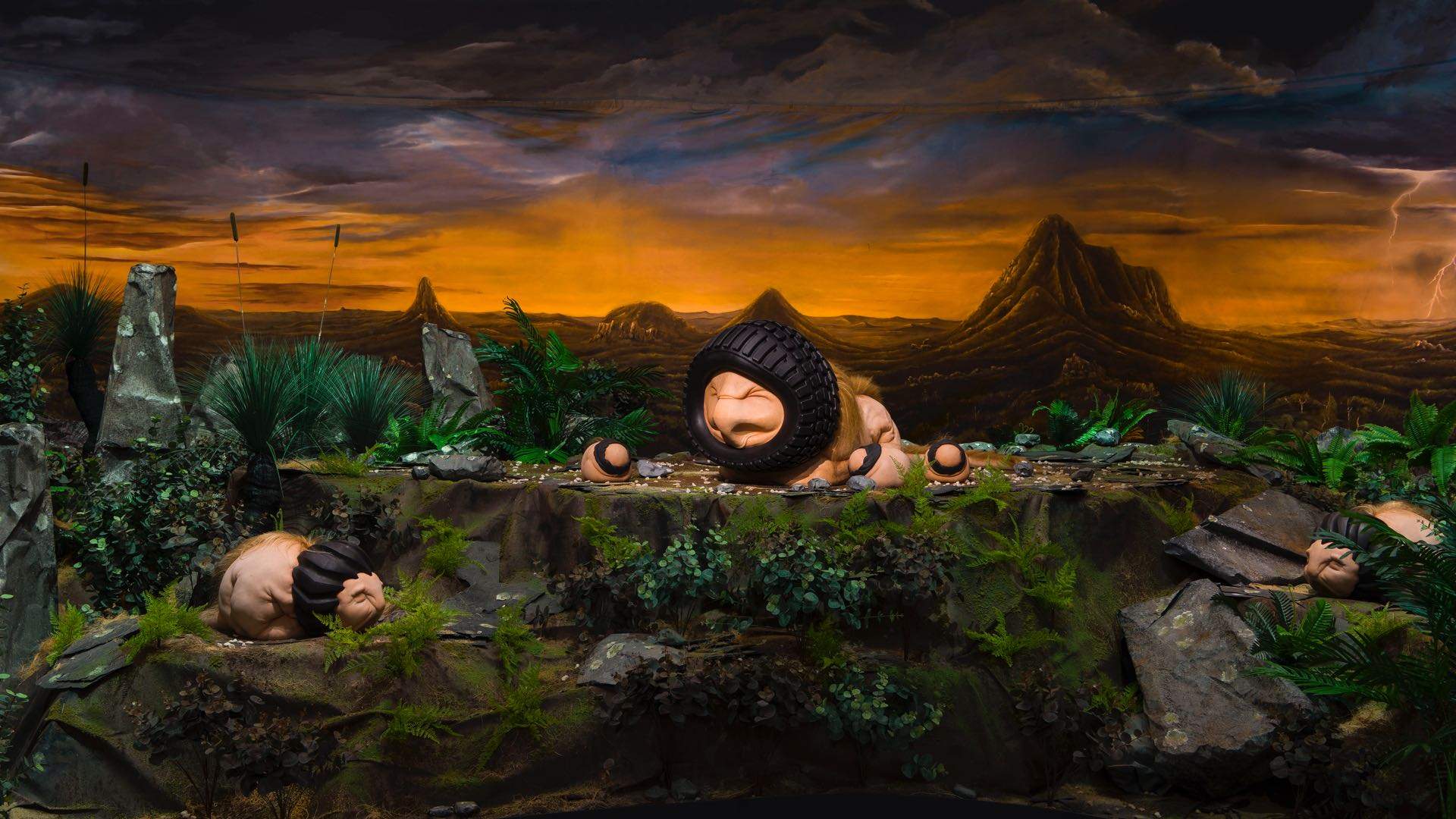 MOSEY THROUGH A STRANGE PATCH OF GREENERY

In the last corner of the exhibition, GOMA becomes a forest — but you don't usually see creatures called 'tyre lions' and 'butthole penguins' in a standard patch of greenery. Yes, that's their actual name, and they're bizarre but delightful, like figures from an offbeat animation you now definitely wish existed. Piccinini arranges these pieces as if she's arranging a display in a natural history museum, which only adds to their uncanny allure. It's the final piece in a gallery-wide puzzle that presents an assortment of seemingly familiar figures, animals, scenes and objects, but shows that they really couldn't be less ordinary. KEEP YOUR EYES ON THE SCREENS

As well as Piccinini's eye-catching sculptures, installations and other pieces, GOMA's walls are lined with multiple screens playing her video works. Each runs on a loop, ranging from 90 seconds to a couple of minutes in duration — and if you're keen to dive even deeper in the artist's mind, they're all well worth your time. Gaze at Ghost, aka a hairy chicken-like creation hanging from the ceiling, for example, then watch In Bocca Al Lupo, a mesmerising short film filled with similar critters. If you only make time for one, however, then head to an adorably odd effort called The Seedling's Dance. It runs for less than three minutes, and it's playing on a cinema-sized screen that you you really won't be able to miss.

COMING FROM OUT OF TOWN OR INTERSTATE?

Can't get enough art? Not quite ready to re-enter reality after wandering through Piccinini's intriguing creations? Heading in from out-of-town and looking for a suitably creative place to stay? Brisbane's Art Series Hotel The Johnson fills its walls, halls, rooms and suites with abstract works from its namesake artist, Michael Johnson, offering the closest thing you'll find to sleeping in a gallery. And, for the duration of Curious Affection, the boutique hotel has a stay-and-see deal that includes one night's accommodation and two tickets to the GOMA exhibition. When you're not marvelling at Piccinini's work, you can look through the in-house art library, watch the dedicated in-room art channel, or get a dose of outdoor splendour while you're taking a splash with a view in the 50-metre pool or lazing around on the luxe deck.

Patricia Piccinini: Curious Affection exhibits at Brisbane's Gallery of Modern Art until August 5, and includes a film screening series and Friday night art parties throughout June and July. For more information, head to the gallery website.