A twitter project by The Wheeler Centre is taking over the city. Thankfully the tweets go a little deeper than #QandA.

These days Twitter is known as two things: a medium on which to stalk Katy Perry and Justin Bieber, and a platform for #QandA Twitterati to descend into madness. With all the white noise out there it's easy to forget its true function — Twitter is a place for discussion. Thankfully this is a notion not lost on those fine folks at The Wheeler Centre. In their most recent project #discuss they're dragging Twitter philosophy into the real world, printing it on our city walls and starting important conversations nationwide. Thankfully it goes a lot deeper than catty #QandA tweets about Christopher Pyne's lizard face.

The week-long project — which comes to an end tomorrow — has been launched in an effort to reignite a quality public discussion. From June 2, participants on Twitter were urged to put forward opinions or interesting thoughts on whatever topic they please. Paired with the hashtag #discuss, the initial thought was then open for exploration, disagreement, or extrapolation from the wider Twitter community. The best ten thoughts from each day have been printed on plaques and placed in fitting locations around Melbourne's CBD and inner suburbs.

Right now Estelle Tang's culturally-weighted declaration that "Australians don't know how lucky they really are" lies knowingly outside Crown Casino. In what must be another blow for employees at The Age, a bleak assertion from writer Clementine Ford is currently plastered right out front of their city offices: "The old guard can fight as much as they like, but they can't stop the youth from one day taking over." Within a week of opening, Chris Lucas' latest venture Kong has already been hit with some Twitter truth: "Thanks to social media, place-dropping has become worse than name-dropping."

It's a powerful concept, and one which gives abstract notions or debates an all-important physical weight. Arguments about boat people are no longer throwaway comments in cyberspace; they're staring you in the face on your way past the Immigration Department. An unsettling philosophical statement gives you some mind fodder on your way into Coles.

Once again, this valued cultural institution is proving its intellectual importance. Disagree? Discuss! The project ends Sunday, June 8 so there's still a chance to get your words plastered on a city street. Even if you miss the deadline, don't worry, the discussion never really stops. 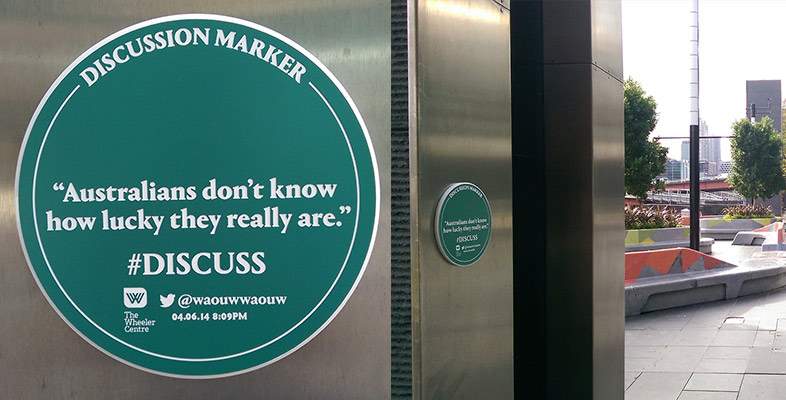 @clementine_ford at The Age offices on Spencer Street. @MIFFofficial at The Classic Cinema in Elsternwick. @hamlwat at the Immigration Department. @AsherTreleaven at The Melbourne Club.

Lead photo: @elissebaitz at Northside Records. All photos via The Wheeler Centre.