'NASA – A Human Adventure' features more than 250 items, including objects that have been to space and back.

'NASA – A Human Adventure' features more than 250 items, including objects that have been to space and back.

Long before humans could soar into space, they could only dream about it. Queensland Museum's new NASA exhibition — an Australian premiere — celebrates both the experience and the idea of space travel. While much of NASA – A Human Adventure features suits, parachutes, equipment and even empty food containers that've actually left the earth, the stellar showcase also pays tribute to the imaginative minds that've inspired every rocket scientist, engineer and astronaut. Visitors not only enter the exhibition via a dome that honours Jules Verne, HG Wells and company, but can also spy their names in the biographies of important figures that are plastered across the South Bank building's walls.

It's easy to understand how one influenced the other — how mere ideas motivated eager adventurers to push boundaries, achieve the seemingly impossible and fly beyond this planet we all call home. Indeed, NASA – A Human Adventure has the same effect. Feasting your eyes on this array of more than 250 historically significant items, getting up close to replicas of famous spacecraft, and hearing Neil Armstrong's iconic "one small step for man, one giant leap for mankind" speech while wandering through the exhibition, plenty of wannabe astronauts — and those who thought they'd stopped dreaming of such things years ago — will leave with visions of rocketing to the moon themselves.

And with 2019 marking half a century since man first set foot on the moon, the timing of this exhibition couldn't be better. It will only be hitting Brisbane, so if you're not a local, you might want to schedule in a trip to the city before October. When you get there, these five standout pieces can't be missed — from space shuttles to space vodka (yes, really). One of NASA – A Human Adventure's first's first big pieces shows signs of wear and tear, and that's to be expected. You don't fly into space, crash into the sea and escape unscathed — even if you're part of a rocket. Visibly worn on the outside, filled with gadgetry inside, this hefty item draws a crowd; however, the story behind the Jupiter program's involvement in space flight is just as fascinating. While the PGM-19 Jupiter was originally designed as a nuclear-tipped missile, the nosecones were instrumental when it came to discovering how manned spaceflights might re-enter the earth's atmosphere. In 1958 and 1959, they were also used to test biological flights in low orbits, using both mice and monkeys. First, the bad news: two types of lunar rover drove across the moon's surface in the 60s and 70s, and they're all still there. Now, the good news: NASA – A Human Adventure has the next best thing: life-sized replicas. Visitors will first spot Lunokhod 1, the Soviets' first moon walker (that's the literal translation). It looks a little bit like a giant Wall-E, was launched in 1970 and stopped transmitting back to earth in 1971. Then you'll mosey on over to the Apollo Lunar Roving Vehicle, the moon buggies used by the Americans on the Apollo 15, 16 and 17 missions. Yes, it's supposed to look like a dune buggy. Yes, the chairs look like deckchairs. No, you can't hop into it. Reaching for the stars requires a wardrobe to match, although an astronaut's attire is functional rather than fashionable. Still, staring at real-life spacesuits never loses its intrigue — especially when some of them have actually been into space. NASA – A Human Adventure features six pieces, including a US Air Force high-altitude pressure suit, plus items from all of its missions from Mercury to Apollo. The highlight: a version of the suit, helmet and gloves that were used during the moon landing, including a cutaway piece that shows just how much protective material is needed (and hints at some of the practicalities of being suited up, as everyone has always wondered). NASA's jaunts into space all started with Project Mercury, which aimed to send a human into orbit and then return them safely. And while NASA – A Human Adventure doesn't feature a real Mercury spacecraft, taking a gander at a life-size replica does spark a definite realisation: for something that was sent into space, it's rather tiny. With Project Gemini, the second human spaceflight program, the capsule is noticeably bigger (although, as this replica makes plain, it still wouldn't suit anyone who isn't fond of small spaces). Finally, exhibition attendees can also peer at full-scale models of the Apollo Lunar Module Crew Cain and the Apollo Command Module — all while walking beneath the enormous (and space-flown) orange-and-white parachute that was used in 1972's Apollo 16 mission. 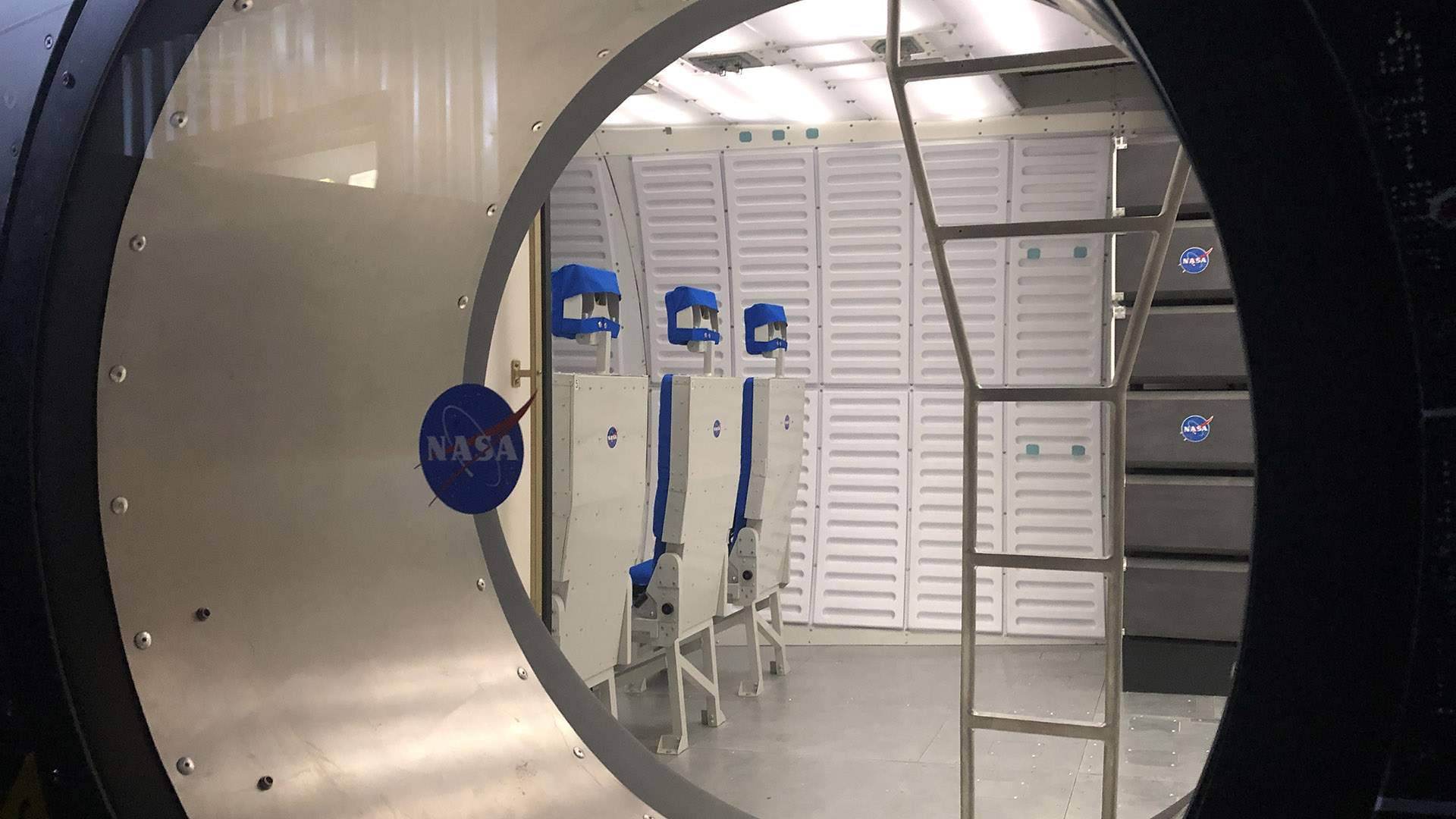 Ever wanted to climb aboard the space shuttle — that is, the world's first reusable spacecraft, which was used to transport cargo into space from the 1980 to 2011? Now that it has been retired after 135 missions, you can't; however you can ascend Queensland Museum's stairs to make a peek at this towering replica. Windows allow attendees to view the cockpit, its console its many, many buttons, although sadly you can't take a seat or press anything yourself. And in good news for anyone with accessibility requirements, there's also a lift that'll take you up to the top level (and folks on crutches or in a wheelchair will also nab a view that no one else gets to see).

NASA – A Human Adventure is currently showing at Brisbane's Queensland Museum until October 8, 2019. Tickets cost $18–21 and can be booked online here.