The Silo Art Trail Is the Country's Largest Outdoor Gallery

The large-scale artworks are painted on silos and spread across 200 kilometres of Victorian outback.

Under current COVID-19 restrictions in Australia, you can't go on a holiday (locally or overseas). But, you can start dreaming. Bookmark this for when you can explore once again.

Winding through the rugged expanse of Victoria's Wimmera Mallee region, lies the country's largest outdoor gallery, where the artworks are metres tall, and grace not walls, but towering grain silos.

The mural portraits, painted by a collective of artists in conjunction with Yarriambiack Shire Council and international street art agency Juddy Roller, capture the spirit and history of this unique corner of the world, each work offering a snapshot of its host town.

If you're visiting the art trail from Melbourne, the closest silo is in Rupanyup — approximately 3.5-hours' drive from the CBD. From there, it'll take you just over two hours to reach the other end of the art trail in Patchewollock. That's the order we've listed the artworks here, but to design an alternate route, head to the Silo Art Trail website. 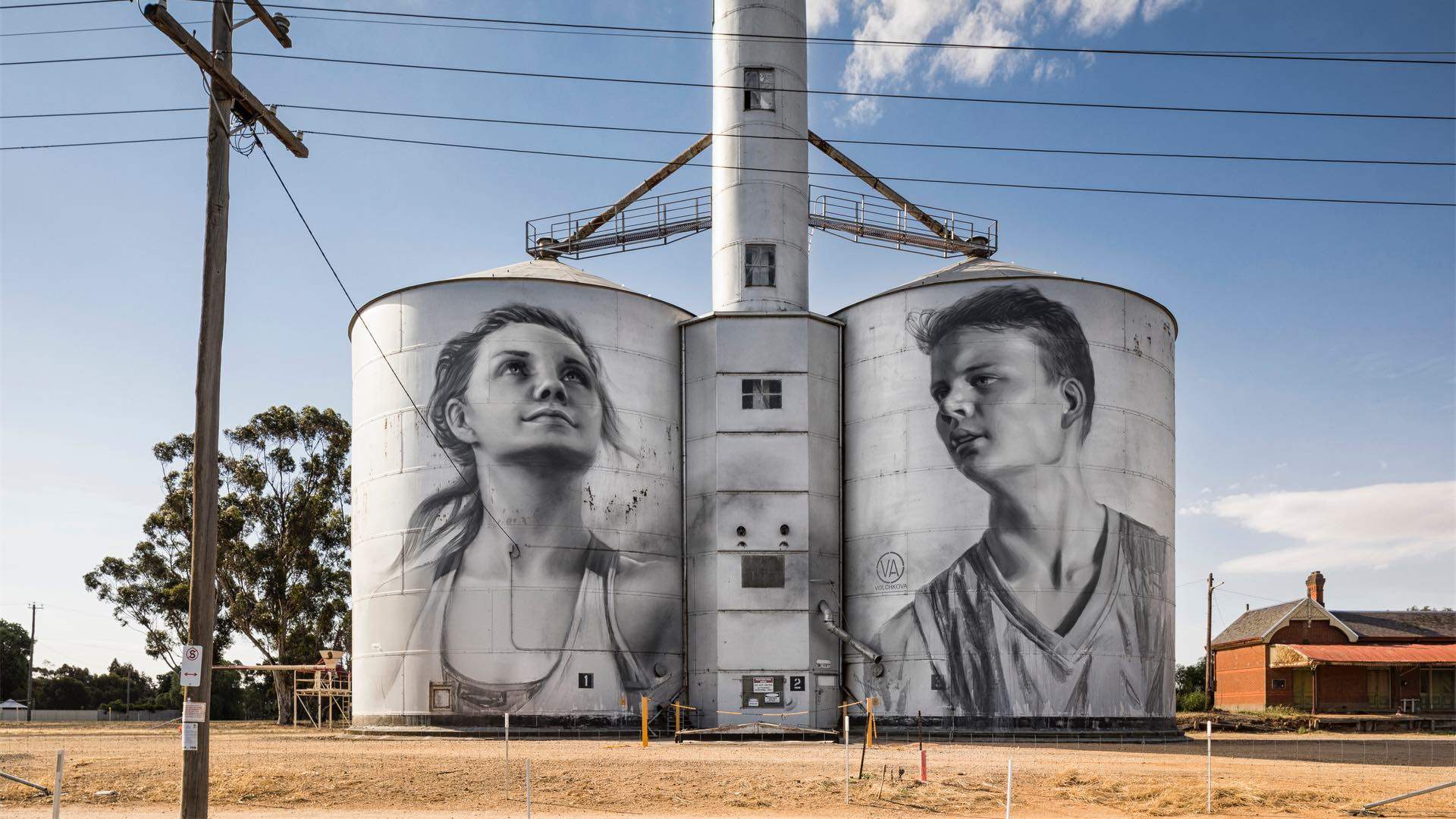 When you reach Rupanyup, you'll spy a realistic pair of faces by Russian muralist Julia Volchkova, an homage to local youngsters Ebony Baker and Jordan Weidemann. Kitted out in their sports gear and looking bright-eyed and fearless, the characters are a nod to the region's younger generation and the realities of rural life for adolescents. Here, Volchkova has used monochrome tones to capture a spirit of strength, creating a lifelike mural similar to her large-scale works depicting locals across Southeast Asia. Shining a light on the region's indigenous history and community, the 80-year-old GrainCorp silos in Sheep Hills now boast a vibrant portrait of four locals — Wergaia Elder Uncle Ron Marks and Wotjobaluk Elder Aunty Regina Hood, alongside children Curtly McDonald and Savannah Marks — with a bold, dreamtime-inspired night sky as the background. The striking piece is the work of Melbourne artist Adnate, whose creative focus often lies in sharing the stories and cultures of Aboriginal Australians. Here, he has embraced the concept of customs and wisdom being passed down through the generations, and the strong ancestral bonds shared among the area's indigenous community. The striking Guido van Helten mural in Brim is where it all began in 2016, spurring inspiration for the rest of the project after putting this sleepy town on the map. Melbourne-raised van Helten kicked things off strongly with his earthy-toned portrait of four farmers, all varying ages, themed around shifting ideas of community identity. The artist's work using translucent aerosol paints lends a faded, ghostlike quality to the characters, shaking the concept of time. The latest addition to the Silo Art Trail is a captivating Rosebery mural by lawyer-turned-street artist Kaff-eine. She has set out to embrace the region's past, present and future, with a portrait of a young female sheep farmer, alongside one of a horseman bonding with his four-legged mate. Elements like cowboy boots, Akubra hat and oilskin vest aren't just an unmistakable nod to country life, but capture the strong sense of symbolism that is signature to much of Kaff-eine's work. Meanwhile, over in Lascelles, there's a sense of quiet wisdom that emanates from the portrait of fourth-generation farming couple Geoff and Merrilyn Horman, wrapped around two decades-old grain silos. Captured by Melbourne's Rone in 2017, this one speaks to a people's deep, long-running connection to the land, with monochrome hues and water-blended paint creating a hazy, ghostly effect through the work. In Patchewollock, Fintan Magee's 2016 silo mural was inspired by a stay at the local pub, where he met his portrait subject, local farmer Nick "Noodle" Hulland. The colourful, 35-metre-tall piece is a fitting ode to the hard-working Aussie farming community and its rugged spirit. Hulland's shown gazing to the horizon wearing the classic faded flanny, sun-bleached hair and weathered face that so often go hand in hand with life on the land.