Popping More Than the Question: Pop-Up Weddings Come to Australia

A Brisbane duo present an appealing alternative to the big ceremony wedding.

Popping More Than the Question: Pop-Up Weddings Come to Australia

A Brisbane duo present an appealing alternative to the big ceremony wedding.

When 30 Rock’s Liz Lemon walked down the aisle, a registry office became her chapel, and the only white ensemble in her wardrobe stood in for traditional wedding attire. With her love of Star Wars well established throughout the show’s seven-season run, Tina Fey’s iconic small-screen character stepped into matrimony in costume as Princess Leia, in a ceremony perfectly suited to her personality.

This May in Brisbane, other brides will follow in her footsteps. On International Star Wars Day, couples can say “I do” as well as “May the Fourth be with you”, courtesy of a pop-up wedding concept spearheaded by marriage celebrant Josh Withers and wedding planner Danielle White.

As the name suggests, a pop-up wedding is a wedding that pops up for one day in a specific location, with distinctive styling from reputable wedding vendors to provide an intimate, inimitable and easy opportunity to get married. It scales down the stress and ramps up the fun of tying the knot, in a one-size-fits-all package. The link between Withers and White’s no-fuss ceremony idea and Fey’s on-screen nuptials is merely coincidental, with the duo driven by wanting to offer an alternative to the usual wedding experience — in style, simplicity and price. Their background in the industry lead them to the realisation that everyone wants something different for their special day, and that the average “getting married” scenario doesn’t suit all tastes. “I’m definitely seeing more unique ceremonies and receptions,” says White of current trends.

“At the essence of it, we think that falling in love is the best thing," Withers says. "If you want to commit to that, and get married, then that is something that should be celebrated — we are in the business of celebrating marriage.

"The pop-up wedding came from knowing that large weddings are not for everyone. Six percent of people who wanted to get married last year didn’t or couldn’t because of either the financial burden or the emotional and mental stress. Or because the big thing just didn’t appeal to them.”

More established in the United States but still a growing field there as well as worldwide, pop-up weddings add something special to the conventional antidote to the big day (the registry wedding), something classier to the customary offbeat idea (the Vegas chapel) and something more concrete to the usual stress avoidance technique (eloping). It's a concept that Withers and White hope will become an accepted substitute to the standard ceremony in Australia.

April Fools' Day marked their first batch of pop-up weddings, celebrating the mischieviousness that increasingly surrounds the date. “Everyone’s doing some thing silly while you’re doing something awesome,” encouraged their website, with playfulness key in their pop-up offerings. “When you say you are getting married on April Fools' Day everyone will think you’re only joking!”

On May 4, participating couples are treated to the full gamut of theming from George Lucas’s beloved sci-fi/fantasy film series. Of course, how much they embrace Star Wars is their decision, as is the use of costumes and props. In their allocated hour, each betrothed pair goes through the legally required formalities with their chosen celebrant, and then relaxes in the Cantina Lounge styled by Amini Concepts. As they enjoy a piece of cake and a glass of champagne, Josh Kelly from Jessie Dains Photography captures their happy “just married” memories. Though two to four friends or relatives can attend, guests are typically absent; it’s about the commitment, not the audience. 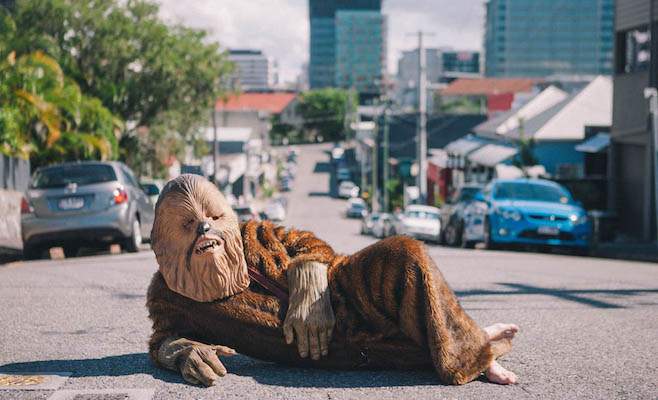 With pop-up weddings proving popular, the list of future themes is limited only by Withers and White’s imaginations, and their observations of traditional weddings extending into the “poppier end of pop culture”. Requests are always welcome. Couples in Brisbane can book in for a trashy Brisvegas or op-shop-styled ceremony later in 2014. The concept will also take to the road, touring around the country for a boho-chic day in Perth as well as a Melbourne outing.

As Withers notes, “people are cottoning on to the fact that there are other ways to get married.” White adds, “I think this is one that is going to stay.”

To find out more about pop-up weddings, visit the Pop-Up Wedding website.